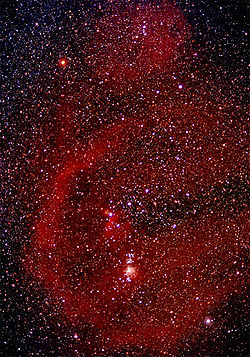 The Orion Molecular Cloud Complex (also often referred to as simply the Orion Complex) refers to a large group of bright nebula
Nebula
A nebula is an interstellar cloud of dust, hydrogen gas, helium gas and other ionized gases...
, dark clouds
Dark nebula
A dark nebula is a type of interstellar cloud that is so dense that it obscures the light from the background emission or reflection nebula or that it blocks out background stars . The extinction of the light is caused by interstellar dust grains located in the coldest, densest parts of larger...
, and young stars located in the constellation
Constellation
In modern astronomy, a constellation is an internationally defined area of the celestial sphere. These areas are grouped around asterisms, patterns formed by prominent stars within apparent proximity to one another on Earth's night sky....
of Orion
Orion (constellation)
Orion, often referred to as The Hunter, is a prominent constellation located on the celestial equator and visible throughout the world. It is one of the most conspicuous, and most recognizable constellations in the night sky...
. The cloud itself is between 1,500 and 1,600 light-years away and is hundreds of light-years across. Several parts of the nebula can be observed through binoculars
Binoculars
Binoculars, field glasses or binocular telescopes are a pair of identical or mirror-symmetrical telescopes mounted side-by-side and aligned to point accurately in the same direction, allowing the viewer to use both eyes when viewing distant objects...
and small telescopes, with some parts (such as the Orion Nebula
Orion Nebula
The Orion Nebula is a diffuse nebula situated south of Orion's Belt. It is one of the brightest nebulae, and is visible to the naked eye in the night sky. M42 is located at a distance of and is the closest region of massive star formation to Earth. The M42 nebula is estimated to be 24 light...
) being visible to the naked eye.

The nebula is important because of the sheer size as it spreads several degrees from Orion's Belt
Orion's Belt
The term Orion's Belt or the Belt of Orion may refer to:* Orion's Belt, an asterism consisting of three bright stars in a row in the constellation Orion* Orion's Belt, a 1985 film* Orion's Belt, a browser game...
to his sword. It is also one of the most active regions of stellar formation
Star formation
Star formation is the process by which dense parts of molecular clouds collapse into a ball of plasma to form a star. As a branch of astronomy star formation includes the study of the interstellar medium and giant molecular clouds as precursors to the star formation process and the study of young...
that can be seen in the night sky, and is home to both protoplanetary discs and very young star
Star
A star is a massive, luminous sphere of plasma held together by gravity. At the end of its lifetime, a star can also contain a proportion of degenerate matter. The nearest star to Earth is the Sun, which is the source of most of the energy on Earth...
s. The nebula is also very bright in the infrared
Infrared
Infrared light is electromagnetic radiation with a wavelength longer than that of visible light, measured from the nominal edge of visible red light at 0.74 micrometres , and extending conventionally to 300 µm...
wavelengths due to the heat-intensive processes involved in the stellar formation, although the complex contains dark nebulae, emission nebula
Emission nebula
An emission nebula is a cloud of ionized gas emitting light of various colors. The most common source of ionization is high-energy photons emitted from a nearby hot star...
, reflection nebula
Reflection nebula
In Astronomy, reflection nebulae are clouds of dust which are simply reflecting the light of a nearby star or stars. The energy from the nearby star, or stars, is insufficient to ionize the gas of the nebula to create an emission nebula, but is enough to give sufficient scattering to make the dust...
, and HII regions.


Nebulae within the complex

The following is a list of notable nebulae within the larger nebula complex: