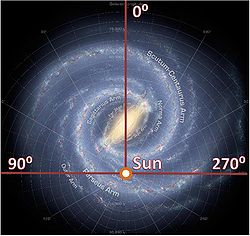 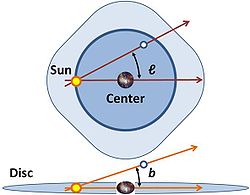 The International Astronomical Union
International Astronomical Union
The International Astronomical Union IAU is a collection of professional astronomers, at the Ph.D. level and beyond, active in professional research and education in astronomy...
(IAU) defined the galactic coordinate system in reference to the Equatorial coordinate system
Equatorial coordinate system
The equatorial coordinate system is a widely-used method of mapping celestial objects. It functions by projecting the Earth's geographic poles and equator onto the celestial sphere. The projection of the Earth's equator onto the celestial sphere is called the celestial equator...
in 1958 The north galactic pole is defined to be at right ascension
Right ascension
Right ascension is the astronomical term for one of the two coordinates of a point on the celestial sphere when using the equatorial coordinate system. The other coordinate is the declination.-Explanation:...
, declination
Declination
In astronomy, declination is one of the two coordinates of the equatorial coordinate system, the other being either right ascension or hour angle. Declination in astronomy is comparable to geographic latitude, but projected onto the celestial sphere. Declination is measured in degrees north and...
(B1950) in the constellation Coma Berenices
Coma Berenices
Coma Berenices is a traditional asterism that has since been defined as one of the 88 modern constellations. It is located near Leo, to which it formerly belonged, and accommodates the North Galactic Pole...
, and the zero of longitude is the great semicircle that originates from this point along the line in position angle
Position angle
Position angle, usually abbreviated PA, is a measurement derived from observing visual binary stars. It is defined as the angular offset in degrees of the secondary star to the primary, relative to the north celestial pole....
123° with respect to the equatorial pole. The galactic longitude increases in the same direction as right ascension. Galactic latitude is positive towards the north galactic pole, the poles themselves at ±90° and the galactic equator being zero. The south galactic pole is in the constellation Sculptor
Sculptor (constellation)
Sculptor is a small and faint constellation in the southern sky. It represents a sculptor. It was introduced by Nicolas Louis de Lacaille in the 18th century. He originally named it Apparatus Sculptoris , but the name was later shortened.-Notable features:No stars brighter than 3rd magnitude are...
.

The equivalent system referred to as J2000 has the north galactic pole at (J2000) (192.859508, 27.128336 in decimal degrees), the zero of longitude at the position angle of 122.932°. The point in the sky at which the galactic latitude and longitude are both zero is (J2000) (266.405100, -28.936175 in decimal degrees). This is offset slightly from the radio source Sagittarius A*, which is the best physical marker of the true galactic center
Galactic Center
The Galactic Center is the rotational center of the Milky Way galaxy. It is located at a distance of 8.33±0.35 kpc from the Earth in the direction of the constellations Sagittarius, Ophiuchus, and Scorpius where the Milky Way appears brightest...
. Sagittarius A* is located at (J2000), or galactic longitude , galactic latitude .

The galactic equator runs through the following constellation
Constellation
In modern astronomy, a constellation is an internationally defined area of the celestial sphere. These areas are grouped around asterisms, patterns formed by prominent stars within apparent proximity to one another on Earth's night sky....
s: 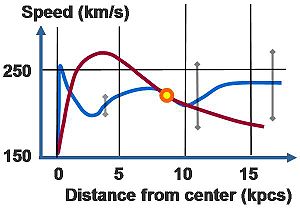 The galactic coordinates approximate a coordinate system centered on the Sun's location. While its planets orbit
Orbit
In physics, an orbit is the gravitationally curved path of an object around a point in space, for example the orbit of a planet around the center of a star system, such as the Solar System...
counterclockwise, the Sun itself orbits the galactic center in a nearly circular path called the solar circle in a clockwise
Clockwise
Circular motion can occur in two possible directions. A clockwise motion is one that proceeds in the same direction as a clock's hands: from the top to the right, then down and then to the left, and back to the top...
direction as viewed from the galactic north pole, at a distance of 8 kpc
Parsec
The parsec is a unit of length used in astronomy. It is about 3.26 light-years, or just under 31 trillion kilometres ....
and a velocity of 220 km/s, which gives an approximate galactic rate of rotation (here at the location of our solar system) of 200 million years/cycle. At other locations the galaxy rotates at a different rate, depending primarily upon the distance from the galactic center. The predicted rate of rotation based upon known mass
Mass
Mass can be defined as a quantitive measure of the resistance an object has to change in its velocity.In physics, mass commonly refers to any of the following three properties of matter, which have been shown experimentally to be equivalent:...
disagrees with the observed rate, as shown in the galaxy rotation curve
Galaxy rotation curve
The rotation curve of a galaxy can be represented by a graph that plots the orbital velocity of the stars or gas in the galaxy on the y-axis against the distance from the center of the galaxy on the x-axis....
and this difference is attributed to dark matter
Dark matter
In astronomy and cosmology, dark matter is matter that neither emits nor scatters light or other electromagnetic radiation, and so cannot be directly detected via optical or radio astronomy...
, although other explanations are continually sought, such as changes in the law of gravitation
Modified Newtonian dynamics
In physics, Modified Newtonian dynamics is a hypothesis that proposes a modification of Newton's law of gravity to explain the galaxy rotation problem. When the uniform velocity of rotation of galaxies was first observed, it was unexpected because Newtonian theory of gravity predicts that objects...
. The differing rates of rotation contribute to the proper motion
Proper motion
The proper motion of a star is its angular change in position over time as seen from the center of mass of the solar system. It is measured in seconds of arc per year, arcsec/yr, where 3600 arcseconds equal one degree. This contrasts with radial velocity, which is the time rate of change in...
s of the stars.