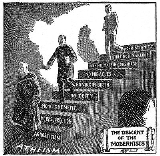 Encyclopedia
Modernism refers to theological opinions expressed during the late 19th and early 20th centuries, but with influence reaching into the 21st century, which are characterized by a break with the past. Catholic modernists form an amorphous group. The term "modernist" appears in Pope Pius X
Pope Pius X
Pope Saint Pius X , born Giuseppe Melchiorre Sarto, was the 257th Pope of the Catholic Church, serving from 1903 to 1914. He was the first pope since Pope Pius V to be canonized. Pius X rejected modernist interpretations of Catholic doctrine, promoting traditional devotional practices and orthodox...
's 1907 encyclical Pascendi Dominici gregis. Modernists, and what are now termed "Neo-Modernists", generally do not openly use this label in describing themselves.

Modernists came to prominence in French and British intellectual circles and, to a lesser extent, in Italy. The Modernist movement was influenced by Protestant theologians and clergy, starting with the Tübingen school in the mid-19th century. Some modernists, however, such as George Tyrrell
George Tyrrell
George Tyrrell was a Jesuit priest and a Modernist theologian and scholar. His attempts to evolve and adapt Catholic teaching in the context of modern ideas made him a key figure in the Modernist controversy within the Roman Catholic Church in the late 19th century.Tyrrell was born in Dublin,...
, would disagree with this; Tyrrell saw himself as loyal to the unity of the Church, and disliked liberal Protestantism.


Forms of Modernism in the Church

Modernism in the Catholic Church was the subject of the definitive encyclical Pascendi Dominici gregis
Pascendi Dominici Gregis
Pascendi dominici gregis was a Papal encyclical letter promulgated by Pope Pius X on 8 September 1907.The pope condemned Modernism, and a whole range of other principles described as "evolutionary", which allowed change to Roman Catholic dogma...
of Pope St. Pius X. Modernism may be described under the following broad headings:


As more naturalistic and scientific studies of history appeared, a way of thinking called historicism
Historicism
Historicism is a mode of thinking that assigns a central and basic significance to a specific context, such as historical period, geographical place and local culture. As such it is in contrast to individualist theories of knowledges such as empiricism and rationalism, which neglect the role of...
arose which suggested that ideas are conditioned by the age in which they are expressed; thus modernists generally believed that most dogmata or teachings of the Church were novelties which arose because of specific circumstances obtaining at given points in its history. At the same time rationalism and literary criticism reduced the possible role of the miraculous, so that the philosophical systems in vogue at the time taught among other things that the existence of God
God
God is the English name given to a singular being in theistic and deistic religions who is either the sole deity in monotheism, or a single deity in polytheism....
could never be known (see Agnosticism
Agnosticism
Agnosticism is the view that the truth value of certain claims—especially claims about the existence or non-existence of any deity, but also other religious and metaphysical claims—is unknown or unknowable....
). Theology
Theology
Theology is the systematic and rational study of religion and its influences and of the nature of religious truths, or the learned profession acquired by completing specialized training in religious studies, usually at a university or school of divinity or seminary.-Definition:Augustine of Hippo...
, formerly “queen of the sciences”, was dethroned, and it was argued that religion must primarily be caused by, and thus be centred on, the feelings of believers. This argument bolsters the impact of secularism by weakening any position supporting the favouring of one religion over another in a given state, on the principle that if no scientific and reasonable assumption of its truth can be made, society should not be so organised as to privilege any particular religion.

The final overall teaching of Modernism is that dogmata (the teachings of the Church, which its members are required to believe) can evolve over time – not only in their expression but also in their substance – rather than remaining the same in substance for all time. This postulate was what made Modernism unique in the history of heresies
Heresy
Heresy is a controversial or novel change to a system of beliefs, especially a religion, that conflicts with established dogma. It is distinct from apostasy, which is the formal denunciation of one's religion, principles or cause, and blasphemy, which is irreverence toward religion...
in the Church. Previously, a heretic (someone who believed and taught something different from what the rest of the church believed) would either claim that he was right and the rest of the Church was wrong because he had received a new revelation from God, or that he had understood the true teaching of God which had previously been understood but was later lost. Both of these scenarios almost inevitably led to an organisational separation from the Church (schism
Schism (religion)
A schism , from Greek σχίσμα, skhísma , is a division between people, usually belonging to an organization or movement religious denomination. The word is most frequently applied to a break of communion between two sections of Christianity that were previously a single body, or to a division within...
) or the offender’s being ejected from it (excommunication
Excommunication
Excommunication is a religious censure used to deprive, suspend or limit membership in a religious community. The word means putting [someone] out of communion. In some religions, excommunication includes spiritual condemnation of the member or group...
). Using the new idea that doctrines evolve, it was possible for the modernist to believe that both the old teachings of the Church and his new, seemingly contradictory teachings were correct — each group had its time and place. This system allows almost any type of new belief which the modernist in question might wish to introduce, and for this reason Modernism was labelled by Pope Pius X as "the synthesis of all heresies".

The "evolution of dogma" theory (see Development of doctrine
Development of doctrine
Development of doctrine is a term used by John Henry Newman and other theologians influenced by him to describe the way Catholic teaching has become more detailed and explicit over the centuries, while later statements of doctrine remain consistent with earlier statements.-Newman's book:The term...
), much in the manner of Luther’s theory of salvation sola fide ('by faith alone') allows for a constant updating of standards of morality. Since majority moral standards shifted heavily during the 20th century, Catholics not accepting the theory were placed in the position of having to abstain from receiving Communion if they wished to engage in some of the actions of some of their fellow-religionists. As for the others, the theory that dogma can change enabled them, as they saw it, to “update” Catholic morality
Morality
Morality is the differentiation among intentions, decisions, and actions between those that are good and bad . A moral code is a system of morality and a moral is any one practice or teaching within a moral code...
while not being concerned with possible contradictions.

In 1893, Pope Leo XIII
Pope Leo XIII
Pope Leo XIII , born Vincenzo Gioacchino Raffaele Luigi Pecci to an Italian comital family, was the 256th Pope of the Roman Catholic Church, reigning from 1878 to 1903...
’s encyclical Providentissimus Deus
Providentissimus Deus
Providentissimus Deus, "On the Study of Holy Scripture", was an encyclical issued by Pope Leo XIII on 18 November 1893.In it, he reviewed the history of Bible study from the time of the Church Fathers to the present, spoke against the errors of the Rationalists and "higher critics", and outlined...
affirmed in principle the legitimacy of Biblical criticism only insofar as it was pursued in a spirit of faith. In 1903 Leo established a Pontifical Biblical Commission to oversee those studies and ensure that they were conducted with respect for the Catholic doctrines on the inspiration and interpretation of scripture.

Pope Pius X, who succeeded Leo, was the first to identify Modernism as a movement. He frequently condemned both its aims and ideas, and was deeply concerned by the ability of Modernism to allow its adherents to go on believing themselves strict Catholics while having an understanding markedly different from the traditional one as to what that meant (a consequence of the notion of evolution of dogma). In July 1907 the Holy Office published the document Lamentabili sane exitu
Lamentabili Sane Exitu
Lamentabili Sane Exitu is a 1907 syllabus, prepared by the Holy Office and confirmed by Pope Pius X, which condemned errors in the exegesis of Holy Scripture and in the history and interpretation of dogma...
, a sweeping condemnation which distinguished sixty-five propositions as Modernist heresies. In September of the same year Pius X promulgated an encyclical Pascendi Dominici gregis
Pascendi Dominici Gregis
Pascendi dominici gregis was a Papal encyclical letter promulgated by Pope Pius X on 8 September 1907.The pope condemned Modernism, and a whole range of other principles described as "evolutionary", which allowed change to Roman Catholic dogma...
, followed in 1910 by the introduction of an anti-Modernist oath
Oath Against Modernism
The Oath against Modernism was issued by the Roman Catholic Pope, Saint Pius X, on September 1, 1910, and mandated that "all clergy, pastors, confessors, preachers, religious superiors, and professors in philosophical-theological seminaries" should swear to it....
to be taken by all Catholic bishops, priests and academic teachers of religion.

To ensure enforcement of these decisions, Monsignor Umberto Benigni
Umberto Benigni
Umberto Benigni was a Catholic priest and Church historian, who was born on 30 March 1862 in Perugia, Italy and died on 27 February 1934 in Rome....
organized, through his personal contacts with theologians, an unofficial group of censors who would report to him those thought to be teaching condemned doctrine. This group was called the Sodalitium Pianum
Sodalitium Pianum
Sodalitium Pianum is Latin for "the fellowship of Pius" . It can refer to two different groups.-In Roman Catholicism:...
, i.e. Fellowship of Pius (X), which in France was known as La Sapinière. Its frequently overzealous and clandestine methods often hindered rather than helped the Church in its combat with Modernism.

Since Pope Paul VI
Pope Paul VI
Paul VI , born Giovanni Battista Enrico Antonio Maria Montini , reigned as Pope of the Catholic Church from 21 June 1963 until his death on 6 August 1978. Succeeding Pope John XXIII, who had convened the Second Vatican Council, he decided to continue it...
, most Church authorities have largely dropped the term "modernism" (perhaps because it is inherently ambiguous and can possibly be confused with the modernist movement in art), preferring instead in the interest of precision to call errors such as secularism
Secularism
Secularism is the principle of separation between government institutions and the persons mandated to represent the State from religious institutions and religious dignitaries...
, liberalism
Liberalism
Liberalism is the belief in the importance of liberty and equal rights. Liberals espouse a wide array of views depending on their understanding of these principles, but generally, liberals support ideas such as constitutionalism, liberal democracy, free and fair elections, human rights,...
or relativism
Relativism
Relativism is the concept that points of view have no absolute truth or validity, having only relative, subjective value according to differences in perception and consideration....
by their several names. The older term has however remained current in the usage of many traditional Catholics and conservative critics within the Church.