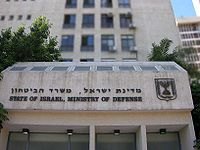 The Ministry of Defence of the government of Israel
Israel
The State of Israel is a parliamentary republic located in the Middle East, along the eastern shore of the Mediterranean Sea...
, is the governmental department responsible for defending the State of Israel from internal and external military threats. Its political head is the Defence Minister, and its offices are located in HaKirya
HaKirya
HaKirya, or The Kirya , is an area in central Tel Aviv, containing various government structures, including the major Israel Defense Forces base, Camp Rabin , named for Yitzhak Rabin...
, Tel Aviv
Tel Aviv
Tel Aviv , officially Tel Aviv-Yafo , is the second most populous city in Israel, with a population of 404,400 on a land area of . The city is located on the Israeli Mediterranean coastline in west-central Israel. It is the largest and most populous city in the metropolitan area of Gush Dan, with...
.

The MOD was established when the British Mandate of Palestine ended, and the British Army
British Army
The British Army is the land warfare branch of Her Majesty's Armed Forces in the United Kingdom. It came into being with the unification of the Kingdom of England and Scotland into the Kingdom of Great Britain in 1707. The new British Army incorporated Regiments that had already existed in England...
departed Palestine
Palestine
Palestine is a conventional name, among others, used to describe the geographic region between the Mediterranean Sea and the Jordan River, and various adjoining lands....
and the State of Israel was formed. This ended the rag-tag militia units during British rule and gave way to the formal defense of the Jewish state.

The Defence Minister of Israel heads the ministry. The post is considered to be the second most important position in the Israeli cabinet
Cabinet of Israel
The Cabinet of Israel is a formal body composed of government officials called ministers, chosen and led by the Prime Minister. The Prime Minister must appoint members based on the distribution of votes to political parties during legislative elections, and its composition must be approved by a...
, and usually has a Deputy Minister. The Defense Minister is also a permanent member of the Security Cabinet. The current Defense Minister is Ehud Barak
Ehud Barak
Ehud Barak is an Israeli politician who served as Prime Minister from 1999 until 2001. He was leader of the Labor Party until January 2011 and holds the posts of Minister of Defense and Deputy Prime Minister in Binyamin Netanyahu's government....
, leader of Independence
Independence (Israeli political party)
Independence is a recently-established political party in Israel. It was launched by Defense Minister Ehud Barak on 17 January 2011 after he and four other Labour Party MKs announced their secession from the caucus...
.

Due to the great importance of the defense portfolio, prime ministers
Prime Minister of Israel
The Prime Minister of Israel is the head of the Israeli government and the most powerful political figure in Israel . The prime minister is the country's chief executive. The official residence of the prime minister, Beit Rosh Hamemshala is in Jerusalem...
have often held the position in addition to their prime ministerial duties; seven of the sixteen Defense Ministers to date were also serving Prime Ministers. Four of them (Moshe Dayan
Moshe Dayan
Moshe Dayan was an Israeli military leader and politician. The fourth Chief of Staff of the Israel Defense Forces , he became a fighting symbol to the world of the new State of Israel...
, Yitzhak Rabin
Yitzhak Rabin
' was an Israeli politician, statesman and general. He was the fifth Prime Minister of Israel, serving two terms in office, 1974–77 and 1992 until his assassination in 1995....
, Ehud Barak
Ehud Barak
Ehud Barak is an Israeli politician who served as Prime Minister from 1999 until 2001. He was leader of the Labor Party until January 2011 and holds the posts of Minister of Defense and Deputy Prime Minister in Binyamin Netanyahu's government....
and Shaul Mofaz
Shaul Mofaz
Lt. General Shaul Mofaz is an Israeli politician who serves as the Chairman of the Foreign Affairs And Defense Committee at the Knesset...
) are also former Chief of Staffs of the Israel Defense Forces.

2 Not a Knesset member at the time.

3 Barak was not a Knesset member at the time of appointment, but was elected in 2009.