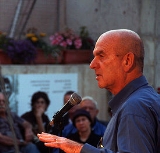 Encyclopedia
Matan Vilnai is an Israel
Israel
The State of Israel is a parliamentary republic located in the Middle East, along the eastern shore of the Mediterranean Sea...
i politician and a former Major General
Major General
Major general or major-general is a military rank used in many countries. It is derived from the older rank of sergeant major general. A major general is a high-ranking officer, normally subordinate to the rank of lieutenant general and senior to the ranks of brigadier and brigadier general...
in the Israel Defense Forces
Israel Defense Forces
The Israel Defense Forces , commonly known in Israel by the Hebrew acronym Tzahal , are the military forces of the State of Israel. They consist of the ground forces, air force and navy. It is the sole military wing of the Israeli security forces, and has no civilian jurisdiction within Israel...
(IDF). He is currently Minister for Home Front Defense
Home Front Defence Minister of Israel
The Home Front Defence Minister of Israel or Minister for Home Front Defense is a cabinet-level portfolio in the Israeli government. The current minister is MK Matan Vilnai. He is the first such minister, and was appointed to the newly-created post by Prime Minister Benjamin Netanyahu on January...
and a member of the Knesset for Independence
Independence (Israeli political party)
Independence is a recently-established political party in Israel. It was launched by Defense Minister Ehud Barak on 17 January 2011 after he and four other Labour Party MKs announced their secession from the caucus...
.

Vilnai was born in Jerusalem in 1944. His father was Prof. Zev Vilnay
Zev Vilnay
Zev Vilnay was an Israeli geographer, author and lecturer.-Biography:Zev Vilnay was born in Kishinev. He moved to Palestine with his parents at the age of six and grew up in Haifa. He served as a military topographer in the Haganah, and later in the Israel Defense Forces. Vilnay and his wife...
, a pioneer in the sphere of Israeli geography and Land of Israel studies, from whom he inherited a love of nature and hiking. He was drafted into the Israel Defense Forces
Israel Defense Forces
The Israel Defense Forces , commonly known in Israel by the Hebrew acronym Tzahal , are the military forces of the State of Israel. They consist of the ground forces, air force and navy. It is the sole military wing of the Israeli security forces, and has no civilian jurisdiction within Israel...
in 1966, serving in the Paratroopers Brigade and the elite reconnaissance unit Sayeret Matkal
Sayeret Matkal
Sayeret Matkal is a special forces unit of the Israel Defence Forces , which is subordinated to the intelligence directorate Aman. First and foremost a field intelligence-gathering unit, conducting deep reconnaissance behind enemy lines to obtain strategic intelligence, Sayeret Matkal is also...
. He was deputy commander http://www.mfa.gov.il/MFA/MFAArchive/2000_2009/2003/6/Matan%20Vilnai of the assault force in Operation Thunderbolt, also known as the Entebbe Raid, to free Jewish and Israeli passengers taken hostage by Palestinian and German terrorists after their Air France plane was hijacked to Entebbe
Entebbe
Entebbe is a major town in Central Uganda. Located on a Lake Victoria peninsula, the town was at one time, the seat of government for the Protectorate of Uganda, prior to Independence in 1962...
, Uganda. Vilanai led the assault team into the airport building, while another team secured the outside. As a major general, Vilnai was the head of the Manpower Directorate, as well as the Deputy Chief of Staff.

Today Vilnai lives in Mevasseret Zion and is a married father of three.

In the run up to the 1999 elections Vilnai joined the Labour Party (which was running as part of the One Israel
One Israel
One Israel was an alliance of the Labor Party, Meimad and Gesher created to run for the 1999 Knesset elections.-Background:One Israel was formed by Labor leader Ehud Barak in the run-up to the 1999 elections with the aim of making Labor appear more centrist and to reduce its secularist and elitist...
alliance), hoping to win a place on its Knesset list. He succeeded, and was voted in to the Knesset. Ehud Barak
Ehud Barak
Ehud Barak is an Israeli politician who served as Prime Minister from 1999 until 2001. He was leader of the Labor Party until January 2011 and holds the posts of Minister of Defense and Deputy Prime Minister in Binyamin Netanyahu's government....
appointed him Minister of Science, Culture and Sport
Science, Culture and Sport Minister of Israel
The Science and Technology Minister of Israel is the political head of the Israeli Ministry of Science and Technology and a relatively minor position in the Israeli cabinet. The current minister is Daniel Hershkowitz of The Jewish Home party...
. Vilnai gave up his Knesset seat six months after the election (he was replaced by Colette Avital
Colette Avital
Colette Avital is an Israeli diplomat and politician. She served as a member of the Knesset for the Labor Party and One Israel between 1999 and 2009.-Biography:...
), but remained a minister. After Ariel Sharon
Ariel Sharon
Ariel Sharon is an Israeli statesman and retired general, who served as Israel’s 11th Prime Minister. He has been in a permanent vegetative state since suffering a stroke on 4 January 2006....
beat Barak in the 2001 election for Prime Minister, Vilnai was reappointed to his post in the new government.

He re-entered the Knesset after the 2003 elections second on Labour's list, but lost his ministerial post as Sharon formed a right-wing coalition that excluded Labour. However, when several parties left the coalition in the face of the disengagement plan
Israel's unilateral disengagement plan
Israel's unilateral disengagement plan , also known as the "Disengagement plan", "Gaza expulsion plan", and "Hitnatkut", was a proposal by Israeli Prime Minister Ariel Sharon, adopted by the government on June 6, 2004 and enacted in August 2005, to evict all Israelis from the Gaza Strip and from...
, Labour was invited into the government in January 2005. Vilnai was initially appointed Minister in the Prime Minister's Office. In August 2005 he was appointed Acting Minister of Science and Technology, and the post was made permanent in November.

In the run-up to the 2006 elections, Vilnai competed in the election for Labour Party leader alongside Shimon Peres
Shimon Peres
GCMG is the ninth President of the State of Israel. Peres served twice as the eighth Prime Minister of Israel and once as Interim Prime Minister, and has been a member of 12 cabinets in a political career spanning over 66 years...
and Binyamin Ben-Eliezer
Binyamin Ben-Eliezer
Binyamin Fuad Ben-Eliezer , , born 12 February 1936) is an Israeli politician and former military officer of Iraqi origin. He currently serves as a member of the Knesset for the Labor Party, and has held several ministerial posts, including Minister of Industry, Trade and Labour, Minister of...
, but was beaten by Amir Peretz
Amir Peretz
Amir Peretz is an Israeli politician and member of the Knesset for the Labour Party. He is a former Defense Minister of Israel and former leader of the Labour Party, having left those positions in June 2007....
. However, he did retain his Knesset seat in the elections, placing 11th on Labour's list.

After Ehud Barak
Ehud Barak
Ehud Barak is an Israeli politician who served as Prime Minister from 1999 until 2001. He was leader of the Labor Party until January 2011 and holds the posts of Minister of Defense and Deputy Prime Minister in Binyamin Netanyahu's government....
won the party leadership election in 2007
Labor Party (Israel) leadership election, 2007
A leadership election was held on June 12, 2007 to elect a new leader of the Israeli Labor Party, due to internal dissent within the party regarding the image of their leader, Amir Peretz-Candidates:...
he appointed Vilnai as Deputy Minister of Defense. In February 2008, Vilnai threatened that Gaza
Gaza
Gaza , also referred to as Gaza City, is a Palestinian city in the Gaza Strip, with a population of about 450,000, making it the largest city in the Palestinian territories.Inhabited since at least the 15th century BC,...
n Palestinians "will bring upon themselves a bigger 'shoah' because we will use all our might to defend ourselves." The word shoah (שואה), literally "disaster", is used in Israel to refer to the "holocaust". But in everyday Hebrew, it is commonly used to mean 'catastrophe' rather than the much larger event known in English as the Holocaust. Mistranslation of Vilnai's statement led to a dangerous misunderstanding in the media.

Vilnai won sixth place on the Labor list for the 2009 elections
Israeli legislative election, 2009
Elections for the 18th Knesset were held in Israel on 10 February 2009. These elections became necessary due to the resignation of Prime Minister Ehud Olmert as leader of the Kadima party, and the failure of his successor, Tzipi Livni, to form a coalition government...
, and retained his seat in the subsequent election. In 2011 he was one of the five members to leave the Labor Party to establish Independence
Independence (Israeli political party)
Independence is a recently-established political party in Israel. It was launched by Defense Minister Ehud Barak on 17 January 2011 after he and four other Labour Party MKs announced their secession from the caucus...
, and was appointed to the newly-created post of Minister for the Home Front, having originally been made Minister of Minorities.