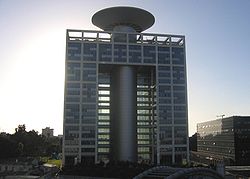 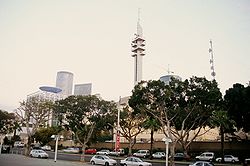 HaKirya, or The Kirya is an area in central Tel Aviv
Tel Aviv
Tel Aviv , officially Tel Aviv-Yafo , is the second most populous city in Israel, with a population of 404,400 on a land area of . The city is located on the Israeli Mediterranean coastline in west-central Israel. It is the largest and most populous city in the metropolitan area of Gush Dan, with...
, containing various government structures, including the major Israel Defense Forces
Israel Defense Forces
The Israel Defense Forces , commonly known in Israel by the Hebrew acronym Tzahal , are the military forces of the State of Israel. They consist of the ground forces, air force and navy. It is the sole military wing of the Israeli security forces, and has no civilian jurisdiction within Israel...
base, Camp Rabin , named for Yitzhak Rabin
Yitzhak Rabin
' was an Israeli politician, statesman and general. He was the fifth Prime Minister of Israel, serving two terms in office, 1974–77 and 1992 until his assassination in 1995....
. It was one of the first IDF bases and has served as the IDF headquarters since its founding in 1948.

Much of the Kirya today is located on the lands of Sarona
Sarona, Palestine
Sarona was a German Templer colony northeast of the city of Jaffa. It was one of the earliest modern villages established in Palestine. Today it is a neighborhood in Tel Aviv, Israel.- History :...
, a Templer
Templers (religious believers)
Templers are members of the Temple Society , a German Protestant sect with roots in the Pietist movement of the Lutheran Church. The Templers were expelled from the church in 1858 because of their millennial beliefs. Their aim was to realize the apocalyptic visions of the prophets of Israel in the...
settlement founded in the 19th Century. Sarona was an agricultural colony, and kept this nature despite the expansion of Tel Aviv and attempts by the city to buy some of Sarona's lands. In World War II
World War II
World War II, or the Second World War , was a global conflict lasting from 1939 to 1945, involving most of the world's nations—including all of the great powers—eventually forming two opposing military alliances: the Allies and the Axis...
, the British forces took control of Sarona and converted it into a prison camp for Germans. After the war, the German prisoners were deported, mostly to Australia
Australia
Australia , officially the Commonwealth of Australia, is a country in the Southern Hemisphere comprising the mainland of the Australian continent, the island of Tasmania, and numerous smaller islands in the Indian and Pacific Oceans. It is the world's sixth-largest country by total area...
, and Sarona became a British military and police base. The base was the site of the first ever unconcealed Haganah
Haganah
Haganah was a Jewish paramilitary organization in what was then the British Mandate of Palestine from 1920 to 1948, which later became the core of the Israel Defense Forces.- Origins :...
attack on a British installation.

The base was taken over by the Haganah on December 16, 1947, and renamed to Camp Yehoshu'a, after Yehoshu'a Globerman, who was killed near Latrun
Latrun
Latrun is a strategic hilltop in the Ayalon Valley in Israel overlooking the road to Jerusalem. It is located 25 kilometers west of Jerusalem and 14 kilometers southeast of Ramla.-Etymology:...
while returning from a mission to Jerusalem. It was the first independent Jewish military base in modern history. The base was dubbed HaKirya because it contained the government offices in Tel Aviv, the provisional capital of Israel at the time, until Jerusalem was secured and declared the capital. The Haganah and then Israel Defense Forces
Israel Defense Forces
The Israel Defense Forces , commonly known in Israel by the Hebrew acronym Tzahal , are the military forces of the State of Israel. They consist of the ground forces, air force and navy. It is the sole military wing of the Israeli security forces, and has no civilian jurisdiction within Israel...
also used the Templer buildings as their first headquarters, including the headquarters of the Sherut Avir
Sherut Avir
The Sherut Avir was the air force of the Haganah and the forerunner of the Israeli Air Force.-Founding:The Sherut Avir was founded in November 1947, just two weeks prior to the passing of the 1947 UN Partition Plan which proposed the division of Palestine into a Jewish and Arab state.It was at...
(later Israeli Air Force
Israeli Air Force
The Israeli Air Force is the air force of the State of Israel and the aerial arm of the Israel Defense Forces. It was founded on May 28, 1948, shortly after the Israeli Declaration of Independence...
) and the Kiryati Brigade
Kiryati Brigade
The Kiryati Brigade was formed in 1948 by David Ben-Gurion and was one of the original nine brigades that made up the Haganah. The Kiryati Brigade was initially responsible for securing the area in and around Tel Aviv...
. The Givati Brigade
Givati Brigade
The Givati Brigade is an infantry brigade of the Israel Defense Forces, and serves as its amphibious force. Givati soldiers are designated by purple berets...
was also founded at the base.

Over the years, the military base's land area has been decreasing, due to the high land value
Real estate appraisal
Real estate appraisal, property valuation or land valuation is the process of valuing real property. The value usually sought is the property's Market Value. Appraisals are needed because compared to, say, corporate stock, real estate transactions occur very infrequently...
and sale to private companies, although the government retains many of its offices in the Kirya Tower
Kirya Tower
The Kirya Tower is a skyscraper in Tel Aviv, Israel. At 158 m , it is the sixth tallest building in Israel. Construction was completed in 2005 on land previously belonging to the IDF HaKirya base. The tower is located opposite Tel Aviv's tallest buildings, the Azrieli Center complex, and is...
in the southern Kirya. As of 2009 however, Camp Rabin remains the base with the largest amount of regular soldiers.

The Kirya today consists of a northern section, used for the military base, and the southern, a business district mostly under construction as of 2008, which includes the Kirya Tower
Kirya Tower
The Kirya Tower is a skyscraper in Tel Aviv, Israel. At 158 m , it is the sixth tallest building in Israel. Construction was completed in 2005 on land previously belonging to the IDF HaKirya base. The tower is located opposite Tel Aviv's tallest buildings, the Azrieli Center complex, and is...
. These sections are separated by Kaplan Street
Kaplan Street
Kaplan Street is a major thoroughfare in central Tel Aviv, Israel, running from the Azrieli Center interchange on its eastern edge, to Ibn Gabirol Street on its western edge. Named after Eliezer Kaplan, an important Israeli politician, the street connects the city center to the Ayalon Highway, and...
. The military base is home to the Matcal Tower
Matcal Tower
-External links:* at Emporis...
and Marganit Tower
Marganit Tower
The Marganit Tower is a skyscraper located in HaKirya, Tel Aviv, Israel. Completed in 1987, the building is 138 meters in height, although most of this is due to its "finger", a concrete mast with antennas and other transmission equipment. As such, it only has 17 floors. Now Israel's twelfth...
, and serves as the headquarters of the IDF's General Staff. From 1951 to 1998, the former new school of Sarona was home to a large birthing center
Birthing center
A birthing center or centre is a healthcare facility, staffed by nurse-midwives, midwives and/or obstetricians, for mothers in labor, who may be assisted by doulas and coaches. By attending the laboring mother, the doulas can assist the midwives and make the birth easier. The midwives monitor the...
(Hakirya Maternity Hospital), closed when the newer Lis Maternity Hospital was opened in the adjacent Tel Aviv Sourasky Medical Center. The hospital building, erected by architect Theo Wieland as the new school in 1930 in Bauhaus style, was torn down in 2002 to give way for the Matcal Tower, however, its cornerstone box of documents was retrieved by Professor Reuven Peyser.

There are plans to evacuate parts of the northern section (military base), including the dining room, in favor of the Tel Aviv Light Rail and private development. Plans also exist to build five new towers in the base, including new structures for the Military Intelligence Directorate and Navy.
The source of this article is wikipedia, the free encyclopedia.  The text of this article is licensed under the GFDL.