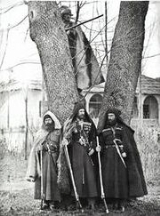 Encyclopedia
The Mingrelians are a subethnic group of Georgians
Georgians
The Georgians are an ethnic group that have originated in Georgia, where they constitute a majority of the population. Large Georgian communities are also present throughout Russia, European Union, United States, and South America....
that mostly live in Samegrelo
Samegrelo
Samegrelo/Samargalo or Megrelia, Mingrelia is a historic province in the western part of Georgia, formerly also known as Odishi.It is inhabited by the Megrelians, an ethnic subgroup of the Georgians.-Geography and Climate:...
(Mingrelia) region of Georgia
Georgia (country)
Georgia is a sovereign state in the Caucasus region of Eurasia. Located at the crossroads of Western Asia and Eastern Europe, it is bounded to the west by the Black Sea, to the north by Russia, to the southwest by Turkey, to the south by Armenia, and to the southeast by Azerbaijan. The capital of...
. They also live in considerable numbers in Abkhazia
Abkhazia
Abkhazia is a disputed political entity on the eastern coast of the Black Sea and the south-western flank of the Caucasus.Abkhazia considers itself an independent state, called the Republic of Abkhazia or Apsny...
and Tbilisi
Tbilisi
Tbilisi is the capital and the largest city of Georgia, lying on the banks of the Mt'k'vari River. The name is derived from an early Georgian form T'pilisi and it was officially known as Tiflis until 1936...
. Approximately 180,000-200,000 people of Mingrelian provenance have been expelled from Abkhazia as a result of the Georgian-Abkhaz conflict
Georgian-Abkhaz conflict
The Georgian–Abkhazian conflict refers to the ethnic conflict between Georgians and Abkhazians in Abkhazia, which is presently a de facto independent partially recognized republic...
in the early 1990s and the ensuing ethnic cleansing of Georgians
Ethnic cleansing of Georgians in Abkhazia
The Ethnic Cleansing of Georgians in Abkhazia, also known as the Massacres of Georgians in Abkhazia and Genocide of Georgians in Abkhazia — refers to ethnic cleansing, massacres and forced mass expulsion of thousands of ethnic Georgians living in Abkhazia during the Georgian-Abkhaz conflict...
in this separatist region.

In several censuses under the Russian Empire and the early Soviet Union
Soviet Union
The Soviet Union , officially the Union of Soviet Socialist Republics , was a constitutionally socialist state that existed in Eurasia between 1922 and 1991....
, Mingrelians were mistakenly considered a separate group, largely because at the time of the annexation Mingrelia was politically separate from the eastern Georgian regions, historical political and cultural centers of the Medieval Georgian Kingdoms. They were, however, reclassified under the broader category of Georgian in the 1930s. Currently, most Mingrelians identify themselves as a subgroup of the Georgian nation and have preserved many characteristic cultural features - including the Mingrelian language - that date back to the pre-Christian Colchian
Colchis
In ancient geography, Colchis or Kolkhis was an ancient Georgian state kingdom and region in Western Georgia, which played an important role in the ethnic and cultural formation of the Georgian nation.The Kingdom of Colchis contributed significantly to the development of medieval Georgian...
era when the modern-day ethnic group of Georgians had yet to consolidate into a nation, rather than a collection of regional tribes.

The first President of an independent Georgia, Zviad Gamsakhurdia
Zviad Gamsakhurdia
Zviad Gamsakhurdia was a dissident, scientist and writer, who became the first democratically elected President of the Republic of Georgia in the post-Soviet era...
(1939–1993), was a Mingrelian. Therefore, after the violent Coup d'etat
Coup d'état
A coup d'état state, literally: strike/blow of state)—also known as a coup, putsch, and overthrow—is the sudden, extrajudicial deposition of a government, usually by a small group of the existing state establishment—typically the military—to replace the deposed government with another body; either...
of December 21, 1991 - January 6, 1992, Samegrelo became the centre of a civil war
Georgian Civil War
The Georgian Civil War consisted of inter-ethnic and intranational conflicts in the regions of South Ossetia and Abkhazia , as well as the violent military coup d'etat of December 21, 1991 - January 6, 1992 against the first democratically elected President of Georgia, Zviad Gamsakhurdia and his...
, which ended with the defeat of Gamsakhurdia's supporters.