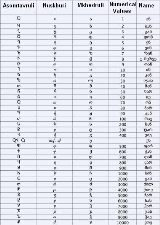 Overview
The Georgian alphabet is the writing system
Writing system
A writing system is a symbolic system used to represent elements or statements expressible in language.-General properties:Writing systems are distinguished from other possible symbolic communication systems in that the reader must usually understand something of the associated spoken language to...
used to write the Georgian language
Georgian language
Georgian is the native language of the Georgians and the official language of Georgia, a country in the Caucasus.Georgian is the primary language of about 4 million people in Georgia itself, and of another 500,000 abroad...
and other Kartvelian languages (Mingrelian, Svan
Svan language
The Svan language is a Kartvelian language spoken in the Western Georgian region of Svaneti primarily by the Georgians of Svan origin...
, sometimes Laz
Laz language
The Laz language is a South Caucasian language spoken by the Laz people on the Southeast shore of the Black Sea...
), and occasionally other languages of the Caucasus
Caucasus
The Caucasus, also Caucas or Caucasia , is a geopolitical region at the border of Europe and Asia, and situated between the Black and the Caspian sea...
such as Ossetic
Ossetic language
Ossetian , also sometimes called Ossete, is an East Iranian language spoken in Ossetia, a region on the slopes of the Caucasus Mountains....
and Abkhaz
Abkhaz language
Abkhaz is a Northwest Caucasian language spoken mainly by the Abkhaz people. It is the official language of Abkhazia where around 100,000 people speak it. Furthermore, it is spoken by thousands of members of the Abkhazian diaspora in Turkey, Georgia's autonomous republic of Adjara, Syria, Jordan...
during the 1940s. The Georgian language has phonemic orthography
Phonemic orthography
A phonemic orthography is a writing system where the written graphemes correspond to phonemes, the spoken sounds of the language. In terms of orthographic depth, these are termed shallow orthographies, contrasting with deep orthographies...
and the modern alphabet has thirty-three letters
Letter (alphabet)
A letter is a grapheme in an alphabetic system of writing, such as the Greek alphabet and its descendants. Letters compose phonemes and each phoneme represents a phone in the spoken form of the language....
.

The word meaning "alphabet", [anbani], is derived from the names of the first two letters of each of the three Georgian alphabets.

Is this Georgian?
More
x