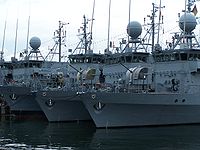 Minehunters are mine countermeasure
Countermeasure
A countermeasure is a measure or action taken to counter or offset another one. As a general concept it implies precision, and is any technological or tactical solution or system designed to prevent an undesirable outcome in the process...
vessels that actively detect and destroy individual naval mine
Naval mine
A naval mine is a self-contained explosive device placed in water to destroy surface ships or submarines. Unlike depth charges, mines are deposited and left to wait until they are triggered by the approach of, or contact with, an enemy vessel...
s. Minesweeper
Minesweeper (ship)
A minesweeper is a small naval warship designed to counter the threat posed by naval mines. Minesweepers generally detect then neutralize mines in advance of other naval operations.-History:...
s, on the other hand, clear mined areas as a whole, without prior detection of mines. A vessel that combines both of these roles is known as a mine countermeasures vessel
Mine countermeasures vessel
A mine countermeasures vessel or MCMV is a type of naval ship designed for the location of and destruction of naval mines which combines the role of a minesweeper and minehunter in one hull. The term MCMV is also applied collectively to minehunters and minesweepers....
(MCMV).

As minehunters will often be operating in close proximity to mines, they are designed so as to reduce their own acoustic
Acoustics
Acoustics is the interdisciplinary science that deals with the study of all mechanical waves in gases, liquids, and solids including vibration, sound, ultrasound and infrasound. A scientist who works in the field of acoustics is an acoustician while someone working in the field of acoustics...
and magnetic
Magnetism
Magnetism is a property of materials that respond at an atomic or subatomic level to an applied magnetic field. Ferromagnetism is the strongest and most familiar type of magnetism. It is responsible for the behavior of permanent magnets, which produce their own persistent magnetic fields, as well...
signatures, two common forms of trigger for mines. For example, they are often soundproofed
Soundproofing
Soundproofing is any means of reducing the sound pressure with respect to a specified sound source and receptor. There are several basic approaches to reducing sound: increasing the distance between source and receiver, using noise barriers to reflect or absorb the energy of the sound waves, using...
by mounting machinery on shock absorber
Shock absorber
A shock absorber is a mechanical device designed to smooth out or damp shock impulse, and dissipate kinetic energy. It is a type of dashpot.-Nomenclature:...
s or by using quiet electrical drive
Diesel-electric
Diesel-electric transmission or diesel-electric powertrain is used by a number of vehicle and ship types for providing locomotion.A diesel-electric transmission system includes a diesel engine connected to an electrical generator, creating electricity that powers electric traction motors...
and usually have a wood
Wood
Wood is a hard, fibrous tissue found in many trees. It has been used for hundreds of thousands of years for both fuel and as a construction material. It is an organic material, a natural composite of cellulose fibers embedded in a matrix of lignin which resists compression...
, glass-reinforced plastic
Glass-reinforced plastic
Fiberglass , is a fiber reinforced polymer made of a plastic matrix reinforced by fine fibers of glass. It is also known as GFK ....
(GRP) or non-ferrous metal
Non-ferrous metal
In metallurgy, a non-ferrous metal is a metal that is not ferrous, that is, any metal, including alloys, that does not contain iron in appreciable amounts...
hull, or are degaussed
Degaussing
Degaussing is the process of decreasing or eliminating an unwanted magnetic field. It is named after Carl Friedrich Gauss, an early researcher in the field of magnetism...
to reduce magnetic signature.

Minehunters are generally small, shallow-draught
Draft (hull)
The draft of a ship's hull is the vertical distance between the waterline and the bottom of the hull , with the thickness of the hull included; in the case of not being included the draft outline would be obtained...
vessels, as they are often called upon to work in enclosed bodies of water such as shipping channels or harbours. As manoeuvrability in such areas is critical the Voith-Schneider cycloidal propulsor
Voith-Schneider
The Voith Schneider propeller , also known as a cycloidal drive is a specialized marine propulsion system . It is highly maneuverable, being able to change the direction of its thrust almost instantaneously...
is commonly used, allowing the engine thrust to be transmitted in any direction. A number of modern vessels use catamaran hulls
Catamaran
A catamaran is a type of multihulled boat or ship consisting of two hulls, or vakas, joined by some structure, the most basic being a frame, formed of akas...
to provide a large, stable working platform with minimal underwater contact; this reduces draught whilst lowering acoustic transmission and reducing the fluid pressure
Fluid dynamics
In physics, fluid dynamics is a sub-discipline of fluid mechanics that deals with fluid flow—the natural science of fluids in motion. It has several subdisciplines itself, including aerodynamics and hydrodynamics...
generated by the moving hull that may otherwise detonate mines with a hydraulic pressure trigger.