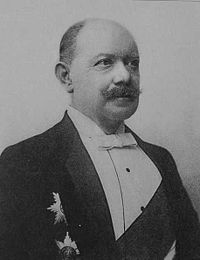 Count
Count
A count or countess is an aristocratic nobleman in European countries. The word count came into English from the French comte, itself from Latin comes—in its accusative comitem—meaning "companion", and later "companion of the emperor, delegate of the emperor". The adjective form of the word is...
Mikhail Nikolayevich Muravyov (Muraviev in older spelling; Михаил Николаевич Муравьёв in Russian
Russian language
Russian is a Slavic language used primarily in Russia, Belarus, Uzbekistan, Kazakhstan, Tajikistan and Kyrgyzstan. It is an unofficial but widely spoken language in Ukraine, Moldova, Latvia, Turkmenistan and Estonia and, to a lesser extent, the other countries that were once constituent republics...
) (April 19, 1845 - June 21, 1900) was a Russia
Russia
Russia or , officially known as both Russia and the Russian Federation , is a country in northern Eurasia. It is a federal semi-presidential republic, comprising 83 federal subjects...
n statesman
Statesman
A statesman is usually a politician or other notable public figure who has had a long and respected career in politics or government at the national and international level. As a term of respect, it is usually left to supporters or commentators to use the term...
who advocated transferring the attention of Russian foreign policy from Europe to the Far East
Far East
The Far East is an English term mostly describing East Asia and Southeast Asia, with South Asia sometimes also included for economic and cultural reasons.The term came into use in European geopolitical discourse in the 19th century,...
. He is probably best remembered for having initiated the Hague Peace Conference.

Mikhail Muravyov was the son of General
General
A general officer is an officer of high military rank, usually in the army, and in some nations, the air force. The term is widely used by many nations of the world, and when a country uses a different term, there is an equivalent title given....
Count Nicholas Muravyov (governor
Governor
A governor is a governing official, usually the executive of a non-sovereign level of government, ranking under the head of state...
of Grodno), and grandson of Count Mikhail Nikolayevich Muravyov-Vilensky
Mikhail Nikolayevich Muravyov-Vilensky
Count Mikhail Nikolayevich Muravyov was one of the most reactionary Russian imperial statesmen of the 19th century...
, who became notorious for his drastic measures in stamping out the Polish insurrection of 1863
January Uprising
The January Uprising was an uprising in the former Polish-Lithuanian Commonwealth against the Russian Empire...
in the Lithuania
Lithuania
Lithuania , officially the Republic of Lithuania is a country in Northern Europe, the biggest of the three Baltic states. It is situated along the southeastern shore of the Baltic Sea, whereby to the west lie Sweden and Denmark...
n provinces. He was educated at a secondary school
Secondary school
Secondary school is a term used to describe an educational institution where the final stage of schooling, known as secondary education and usually compulsory up to a specified age, takes place...
at Poltava
Poltava
Poltava is a city in located on the Vorskla River in central Ukraine. It is the administrative center of the Poltava Oblast , as well as the surrounding Poltava Raion of the oblast. Poltava's estimated population is 298,652 ....
, and was for a short time at Heidelberg University.

In 1864, he entered the chancellery
Chancellor
Chancellor is the title of various official positions in the governments of many nations. The original chancellors were the Cancellarii of Roman courts of justice—ushers who sat at the cancelli or lattice work screens of a basilica or law court, which separated the judge and counsel from the...
of the minister of foreign affairs at St.Petersburg, and was soon afterwards attached to the Russian legation
Legation
A legation was the term used in diplomacy to denote a diplomatic representative office lower than an embassy. Where an embassy was headed by an Ambassador, a legation was headed by a Envoy Extraordinary and Minister Plenipotentiary....
at Stuttgart
Stuttgart
Stuttgart is the capital of the state of Baden-Württemberg in southern Germany. The sixth-largest city in Germany, Stuttgart has a population of 600,038 while the metropolitan area has a population of 5.3 million ....
, where he attracted the notice of Queen Olga of Württemberg. He was transferred to Berlin
Berlin
Berlin is the capital city of Germany and is one of the 16 states of Germany. With a population of 3.45 million people, Berlin is Germany's largest city. It is the second most populous city proper and the seventh most populous urban area in the European Union...
, then to Stockholm
Stockholm
Stockholm is the capital and the largest city of Sweden and constitutes the most populated urban area in Scandinavia. Stockholm is the most populous city in Sweden, with a population of 851,155 in the municipality , 1.37 million in the urban area , and around 2.1 million in the metropolitan area...
, and back again to Berlin. In 1877, he was second secretary at the Hague. During the Russo-Turkish War of 1877-78, he was a delegate of the Red Cross Society in charge of an ambulance
Ambulance
An ambulance is a vehicle for transportation of sick or injured people to, from or between places of treatment for an illness or injury, and in some instances will also provide out of hospital medical care to the patient...
train provided by Queen Olga of Württemberg.

After the war, he was successively first secretary in Paris
Paris
Paris is the capital and largest city in France, situated on the river Seine, in northern France, at the heart of the Île-de-France region...
, chancellor
Chancellor
Chancellor is the title of various official positions in the governments of many nations. The original chancellors were the Cancellarii of Roman courts of justice—ushers who sat at the cancelli or lattice work screens of a basilica or law court, which separated the judge and counsel from the...
of the embassy in Berlin, and then minister in Copenhagen
Copenhagen
Copenhagen is the capital and largest city of Denmark, with an urban population of 1,199,224 and a metropolitan population of 1,930,260 . With the completion of the transnational Øresund Bridge in 2000, Copenhagen has become the centre of the increasingly integrating Øresund Region...
. In Denmark
Denmark
Denmark is a Scandinavian country in Northern Europe. The countries of Denmark and Greenland, as well as the Faroe Islands, constitute the Kingdom of Denmark . It is the southernmost of the Nordic countries, southwest of Sweden and south of Norway, and bordered to the south by Germany. Denmark...
, he was brought much into contact with the imperial family, and, on the death of Prince Lobanov-Rostovsky in 1897, he was appointed by Tsar
Tsar
Tsar is a title used to designate certain European Slavic monarchs or supreme rulers. As a system of government in the Tsardom of Russia and Russian Empire, it is known as Tsarist autocracy, or Tsarism...
Nicholas II
Nicholas II of Russia
Nicholas II was the last Emperor of Russia, Grand Prince of Finland, and titular King of Poland. His official short title was Nicholas II, Emperor and Autocrat of All the Russias and he is known as Saint Nicholas the Passion-Bearer by the Russian Orthodox Church.Nicholas II ruled from 1894 until...
to be his minister of foreign affairs.

The next three and a half years were a critical time for Europe
Europe
Europe is, by convention, one of the world's seven continents. Comprising the westernmost peninsula of Eurasia, Europe is generally 'divided' from Asia to its east by the watershed divides of the Ural and Caucasus Mountains, the Ural River, the Caspian and Black Seas, and the waterways connecting...
an diplomacy
Diplomacy
Diplomacy is the art and practice of conducting negotiations between representatives of groups or states...
. The revolt of Crete
Crete
Crete is the largest and most populous of the Greek islands, the fifth largest island in the Mediterranean Sea, and one of the thirteen administrative regions of Greece. It forms a significant part of the economy and cultural heritage of Greece while retaining its own local cultural traits...
against Ottoman
Ottoman Empire
The Ottoman EmpireIt was usually referred to as the "Ottoman Empire", the "Turkish Empire", the "Ottoman Caliphate" or more commonly "Turkey" by its contemporaries...
rule and events leading to the Boxer Rebellion
Boxer Rebellion
The Boxer Rebellion, also called the Boxer Uprising by some historians or the Righteous Harmony Society Movement in northern China, was a proto-nationalist movement by the "Righteous Harmony Society" , or "Righteous Fists of Harmony" or "Society of Righteous and Harmonious Fists" , in China between...
in China
China
Chinese civilization may refer to:* China for more general discussion of the country.* Chinese culture* Greater China, the transnational community of ethnic Chinese.* History of China* Sinosphere, the area historically affected by Chinese culture...
were disturbing factors. Count Muravyov's policy regarding Crete was vacillating; in China, his hands were forced by Germany
Germany
Germany , officially the Federal Republic of Germany , is a federal parliamentary republic in Europe. The country consists of 16 states while the capital and largest city is Berlin. Germany covers an area of 357,021 km2 and has a largely temperate seasonal climate...
's action at Kiaochow. He misled Britain
United Kingdom
The United Kingdom of Great Britain and Northern IrelandIn the United Kingdom and Dependencies, other languages have been officially recognised as legitimate autochthonous languages under the European Charter for Regional or Minority Languages...
concerning the Russian lease
Concession (territory)
In international law, a concession is a territory within a country that is administered by an entity other than the state which holds sovereignty over it. This is usually a colonizing power, or at least mandated by one, as in the case of colonial chartered companies.Usually, it is conceded, that...
s of Port Arthur
Lüshunkou
Lüshunkou is a district in the municipality of Dalian, Liaoning province, China. Also called Lüshun City or Lüshun Port, it was formerly known as both Port Arthur and Ryojun....
and Talienwan from China; he told the British ambassador that these would be open ports, and afterwards significantly modified this pledge.

When Tsar Nicholas inaugurated the Peace Conference at the Hague, Count Muravyov extricated his country from a situation of some embarrassment in China; but when, subsequently, Russian agents in Manchuria
Manchuria
Manchuria is a historical name given to a large geographic region in northeast Asia. Depending on the definition of its extent, Manchuria usually falls entirely within the People's Republic of China, or is sometimes divided between China and Russia. The region is commonly referred to as Northeast...
and Peking connived at the agitation which culminated in the Boxer Rebellion of 1900, relations between Muravyov and the tsar became strained. Muravyov died suddenly on June 21, 1900 of apoplexy
Apoplexy
Apoplexy is a medical term, which can be used to describe 'bleeding' in a stroke . Without further specification, it is rather outdated in use. Today it is used only for specific conditions, such as pituitary apoplexy and ovarian apoplexy. In common speech, it is used non-medically to mean a state...
, brought on, it was said, by a stormy interview with the tsar.
The source of this article is wikipedia, the free encyclopedia.  The text of this article is licensed under the GFDL.