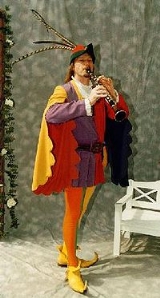 Encyclopedia
Michael Boyer is an American actor
Actor
An actor is a person who acts in a dramatic production and who works in film, television, theatre, or radio in that capacity...
and showman who has been living the role of the Pied Piper of Hamelin
Hamelin
Hamelin is a town on the river Weser in Lower Saxony, Germany. It is the capital of the district of Hamelin-Pyrmont and has a population of 58,696 ....
in Germany
Germany
Germany , officially the Federal Republic of Germany , is a federal parliamentary republic in Europe. The country consists of 16 states while the capital and largest city is Berlin. Germany covers an area of 357,021 km2 and has a largely temperate seasonal climate...
, for nearly 15 years now.http://travel.nytimes.com/2010/06/27/travel/27journeys-1.html?pagewanted=2 He lives in the legendary town with his wife and son who both have acting talent and experience.

Born in Harrisburg, Pennsylvania
Pennsylvania
The Commonwealth of Pennsylvania is a U.S. state that is located in the Northeastern and Mid-Atlantic regions of the United States. The state borders Delaware and Maryland to the south, West Virginia to the southwest, Ohio to the west, New York and Ontario, Canada, to the north, and New Jersey to...
, U.S.
United States
The United States of America is a federal constitutional republic comprising fifty states and a federal district...
, Boyer soon discovered his theatrical talents to the chagrin of his teachers and relatives. He sang in school choirs, acted, was school mascot, and MC’d the school shows in his youth. The general poor finances of his family daunted his hopes of playing in the school band at the time, so that he never properly learned to play music. He was interested in learning the clarinet
Clarinet
The clarinet is a musical instrument of woodwind type. The name derives from adding the suffix -et to the Italian word clarino , as the first clarinets had a strident tone similar to that of a trumpet. The instrument has an approximately cylindrical bore, and uses a single reed...
, but joined the US Army when he was 18. He opted for Germany and was stationed there for three years in the Military Police Corps. An additional seven years in the NATO civilian sector had him stationed in Comiso
Comiso
Comiso is an Italian municipality in the Province of Ragusa in Sicily.-Geography:Comiso consists of three boroughs: Comiso, Pedalino, and Quaglio. It lies some 22 km west of Ragusa in the South of Sicily...
Italy
Italy
Italy , officially the Italian Republic languages]] under the European Charter for Regional or Minority Languages. In each of these, Italy's official name is as follows:;;;;;;;;), is a unitary parliamentary republic in South-Central Europe. To the north it borders France, Switzerland, Austria and...
, where he began to do radio spots for the troops.

Upon returning to Germany, he organized events and wrote for army newspapers. The official position of the Pied Piper of Hamelin was vacant and Boyer, who had been playing a comical jester in the carnival
Carnival
Carnaval is a festive season which occurs immediately before Lent; the main events are usually during February. Carnaval typically involves a public celebration or parade combining some elements of a circus, mask and public street party...
season, put in for the position and was selected in 1994. Since then, he not only acts the part, but lives the legend daily in the streets of the northern German town as the local tourist attraction. His promotional tours have taken him as far as Tokyo
Tokyo
, ; officially , is one of the 47 prefectures of Japan. Tokyo is the capital of Japan, the center of the Greater Tokyo Area, and the largest metropolitan area of Japan. It is the seat of the Japanese government and the Imperial Palace, and the home of the Japanese Imperial Family...
, Shanghai
Shanghai
Shanghai is the largest city by population in China and the largest city proper in the world. It is one of the four province-level municipalities in the People's Republic of China, with a total population of over 23 million as of 2010...
, Helsinki
Helsinki
Helsinki is the capital and largest city in Finland. It is in the region of Uusimaa, located in southern Finland, on the shore of the Gulf of Finland, an arm of the Baltic Sea. The population of the city of Helsinki is , making it by far the most populous municipality in Finland. Helsinki is...
, Vienna
Vienna
Vienna is the capital and largest city of the Republic of Austria and one of the nine states of Austria. Vienna is Austria's primary city, with a population of about 1.723 million , and is by far the largest city in Austria, as well as its cultural, economic, and political centre...
, and Nottingham
Nottingham
Nottingham is a city and unitary authority in the East Midlands of England. It is located in the ceremonial county of Nottinghamshire and represents one of eight members of the English Core Cities Group...
in England
England
England is a country that is part of the United Kingdom. It shares land borders with Scotland to the north and Wales to the west; the Irish Sea is to the north west, the Celtic Sea to the south west, with the North Sea to the east and the English Channel to the south separating it from continental...
where he convinced Robin Hood
Robin Hood
Robin Hood was a heroic outlaw in English folklore. A highly skilled archer and swordsman, he is known for "robbing from the rich and giving to the poor", assisted by a group of fellow outlaws known as his "Merry Men". Traditionally, Robin Hood and his men are depicted wearing Lincoln green clothes....
to join forces with the Piper and William Tell
William Tell
William Tell is a folk hero of Switzerland. His legend is recorded in a late 15th century Swiss chronicle....
to form the Legion of Legends. He has appeared at the 50th Steuben Parade in New York City in 2007.