Encyclopedia
Mettenheim is an Ortsgemeinde – a municipality
Municipalities of Germany
Municipalities are the lowest level of territorial division in Germany. This may be the fourth level of territorial division in Germany, apart from those states which include Regierungsbezirke , where municipalities then become the fifth level.-Overview:With more than 3,400,000 inhabitants, the...
belonging to a Verbandsgemeinde
Verbandsgemeinde
A Verbandsgemeinde is an administrative unit in the German Bundesländer of Rhineland-Palatinate and Saxony-Anhalt.-Rhineland-Palatinate:...
, a kind of collective municipality – in the Alzey-Worms
Alzey-Worms
Alzey-Worms is a district in Rhineland-Palatinate, Germany. It is bounded by the district Groß-Gerau , the city of Worms and the districts of Bad Dürkheim, Donnersbergkreis, Bad Kreuznach and Mainz-Bingen.- History :...
district in Rhineland-Palatinate
Rhineland-Palatinate
Rhineland-Palatinate is one of the 16 states of the Federal Republic of Germany. It has an area of and about four million inhabitants. The capital is Mainz. English speakers also commonly refer to the state by its German name, Rheinland-Pfalz ....
, Germany
Germany
Germany , officially the Federal Republic of Germany , is a federal parliamentary republic in Europe. The country consists of 16 states while the capital and largest city is Berlin. Germany covers an area of 357,021 km2 and has a largely temperate seasonal climate...
.

Mettenheim was mentioned as early as 873 in the Annales Wormatienses as a Roman
Ancient Rome
Ancient Rome was a thriving civilization that grew on the Italian Peninsula as early as the 8th century BC. Located along the Mediterranean Sea and centered on the city of Rome, it expanded to one of the largest empires in the ancient world....
colony. It was originally held by the Bishop of Worms, but, still in early times, the Counts of Leiningen were enfeoffed with it, later counting it as being among their ancestral holdings. Towards the end of the 17th century, the village ended up in the Frankfurt merchant Canpoing’s ownership, from whom it then passed to the Counts of Wartenberg. In 1393, a castle at Mettenheim was mentioned, whose owners, the Chamberlains and Knights of Fleckenstein, sold it at that time to the City of Worms
Worms, Germany
Worms is a city in Rhineland-Palatinate, Germany, on the Rhine River. At the end of 2004, it had 85,829 inhabitants.Established by the Celts, who called it Borbetomagus, Worms today remains embattled with the cities Trier and Cologne over the title of "Oldest City in Germany." Worms is the only...
.

The council is made up of 16 council members, who were elected at the municipal election held on 7 June 2009, and the honorary mayor as chairman.

The municipal election held on 7 June 2009 yielded the following results:

Pupillin
Pupillin
Pupillin is a commune in the Jura department in Franche-Comté in eastern France.-Demographics:As of the census of 1999, the population was 218.The estimate for 2005 was 244.-References:*...
, Jura, France
France
The French Republic , The French Republic , The French Republic , (commonly known as France , is a unitary semi-presidential republic in Western Europe with several overseas territories and islands located on other continents and in the Indian, Pacific, and Atlantic oceans. Metropolitan France...
Mettenheim
Mettenheim
Mettenheim is a municipality in the district of Mühldorf in Bavaria in Germany....
, Bavaria
Bavaria
Bavaria, formally the Free State of Bavaria is a state of Germany, located in the southeast of Germany. With an area of , it is the largest state by area, forming almost 20% of the total land area of Germany...

The municipality’s arms
Coat of arms
A coat of arms is a unique heraldic design on a shield or escutcheon or on a surcoat or tabard used to cover and protect armour and to identify the wearer. Thus the term is often stated as "coat-armour", because it was anciently displayed on the front of a coat of cloth...
might be described thus: Argent a talon barwise lopped, the toes to chief, azure.

In 2007, the crypt
Crypt
In architecture, a crypt is a stone chamber or vault beneath the floor of a burial vault possibly containing sarcophagi, coffins or relics....
of the Counts of Wartenberg was opened to the public after renovation.

About half of the usable agricultural land of 540 ha in Mettenheim is planted with vineyards. The vineyards are sheltered from the wind on the typical Wonnegau terraces. There are 34 businesses that earn their living wholly from winegrowing. Mettenheim lies in the Nierstein zone of the Rhenish Hesse
Rheinhessen (wine region)
Rheinhessen is the largest of 13 German wine regions for quality wines with under cultivation in 2008. Named for the traditional region of Rhenish Hesse, it lies on the left bank of the River Rhine between Worms and Bingen in the federal state of Rhineland-Palatinate...
wine region and bears the winemaking appellations Michelsberg, Schloßberg and Goldberg. 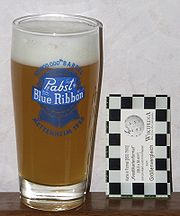 Jacob Best, Sr. (1786–1861) was born in Hesse-Darmstadt where he learned the brewing trade, later running a small brewery
Brewery
A brewery is a dedicated building for the making of beer, though beer can be made at home, and has been for much of beer's history. A company which makes beer is called either a brewery or a brewing company....
in Mettenheim. He later founded one of the forerunners of the Pabst Brewing Company
Pabst Brewing Company
Pabst Brewing Company is an American company that dates its origins to a brewing company founded in 1844 by Jacob Best and by 1889 named after Frederick Pabst. It is currently the holding company contracting for the brewing of over two dozen brands of beer and malt liquor from defunct companies...
in Milwaukee after his emigration in 1844 to join his sons.