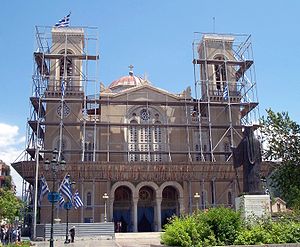 Annunciation Cathedral, the Metropolitan Cathedral of Athens, popularly known as the "Mētrópolis", is the cathedral
Cathedral
A cathedral is a Christian church that contains the seat of a bishop...
church of the Archbishop of Athens and all Greece
Greece
Greece , officially the Hellenic Republic , and historically Hellas or the Republic of Greece in English, is a country in southeastern Europe....
.

Construction of the Cathedral began on Christmas Day, 1842 with the laying of the cornerstone by King Otto
Otto of Greece
Otto, Prince of Bavaria, then Othon, King of Greece was made the first modern King of Greece in 1832 under the Convention of London, whereby Greece became a new independent kingdom under the protection of the Great Powers .The second son of the philhellene King Ludwig I of Bavaria, Otto ascended...
and Queen Amalia
Amalia of Oldenburg
Amalia of Oldenburg, Queen of Greece was the consort of King Otto of Greece . Born the daughter of Augustus, Grand Duke of Oldenburg and Princess Adelheid of Anhalt-Bernburg-Schaumburg-Hoym, she married King Otto on 22 December 1836, in Oldenburg...
.

Workers used marble from 72 demolished churches to build the Cathedral's immense walls. Three architects and 20 years later, it was complete. On May 21, 1862, the completed Cathedral was dedicated to the Annunciation of the Mother of God
Annunciation
The Annunciation, also referred to as the Annunciation to the Blessed Virgin Mary or Annunciation of the Lord, is the Christian celebration of the announcement by the angel Gabriel to Virgin Mary, that she would conceive and become the mother of Jesus the Son of God. Gabriel told Mary to name her...
'(Ευαγγελισμός της Θεοτόκου)' by the King and Queen. The Cathedral is a three aisle, domed basilica
Basilica
The Latin word basilica , was originally used to describe a Roman public building, usually located in the forum of a Roman town. Public basilicas began to appear in Hellenistic cities in the 2nd century BC.The term was also applied to buildings used for religious purposes...
that measures 130 feet (39.6 m) long, 65 feet (19.8 m) wide, and 80 feet (24.4 m) high. Inside are the tombs of two saints killed by the Ottoman Turks
Ottoman Turks
The Ottoman Turks were the Turkish-speaking population of the Ottoman Empire who formed the base of the state's military and ruling classes. Reliable information about the early history of Ottoman Turks is scarce, but they take their Turkish name, Osmanlı , from the house of Osman I The Ottoman...
during the Turkish Occupation: Saint Philothei and Patriarch Gregory V.

To the immediate south of the Cathedral is the little Church of St. Eleftherios
Agios Eleftherios (Church)
The Agios Eleftherios church, also known as Mikri Mitropoli or Panagia Gorgoepikoos might be the smallest church in the world. It is located at the Mitropolis square, next to the Metropolitan Cathedral of Athens .Michael Choniates, the bishop of Athens, ordered the construction at the start of the...
also called the "Little Mitropoli."

In the Square in front of the Cathedral stand two statues. The first is that of Saint Constantine XI the Ethnomartyr
Constantine XI
Constantine XI Palaiologos, latinized as Palaeologus , Kōnstantinos XI Dragasēs Palaiologos; February 8, 1404 – May 29, 1453) was the last reigning Byzantine Emperor from 1449 to his death as member of the Palaiologos dynasty...
, the last Byzantine Emperor. The second is a statue of Archbishop Damaskinos
Archbishop Damaskinos
Archbishop Damaskinos Papandreou was the archbishop of Athens and All Greece from 1941 until his death. He was also the regent of Greece between the pull-out of the German occupation force in 1944 and the return of King Georgios II to Greece in 1946...
who was Archbishop of Athens during World War II and was Regent
Regent
A regent, from the Latin regens "one who reigns", is a person selected to act as head of state because the ruler is a minor, not present, or debilitated. Currently there are only two ruling Regencies in the world, sovereign Liechtenstein and the Malaysian constitutive state of Terengganu...
for King George II
George II of Greece
George II reigned as King of Greece from 1922 to 1924 and from 1935 to 1947.-Early life, first period of kingship and exile:George was born at the royal villa at Tatoi, near Athens, the eldest son of King Constantine I of Greece and his wife, Princess Sophia of Prussia...
and Prime Minister of Greece
Prime Minister of Greece
The Prime Minister of Greece , officially the Prime Minister of the Hellenic Republic , is the head of government of the Hellenic Republic and the leader of the Greek cabinet. The current interim Prime Minister is Lucas Papademos, a former Vice President of the European Central Bank, following...
in 1946.

The Metropolitan Cathedral remains a major landmark in Athens and the site of important ceremonies with national political figures present, as well as weddings and funerals of the rich and famous.