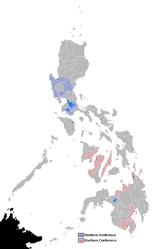 Encyclopedia
The Metropolitan Basketball Association (MBA) or Metroball was a professional
Professional
A professional is a person who is paid to undertake a specialised set of tasks and to complete them for a fee. The traditional professions were doctors, lawyers, clergymen, and commissioned military officers. Today, the term is applied to estate agents, surveyors , environmental scientists,...
basketball
Basketball
Basketball is a team sport in which two teams of five players try to score points by throwing or "shooting" a ball through the top of a basketball hoop while following a set of rules...
league in the Philippines
Philippines
The Philippines , officially known as the Republic of the Philippines , is a country in Southeast Asia in the western Pacific Ocean. To its north across the Luzon Strait lies Taiwan. West across the South China Sea sits Vietnam...
founded in 1998.

The MBA is widely viewed as broadcast giant ABS-CBN's attempt to undermine the PBA after failing to snatch its broadcast rights in 1998. Metroball allowed foreigners to play for their teams, not requiring Philippine passports of them, nor requiring those foreigners to have Filipino blood. All the league required is that these players be born in the Philippines. As a direct result of this practice, the MBA and its foreign-born players began attracting attention away from the PBA, forcing the PBA to escalate their own players' salaries and practically rendering the PBA draft useless through a "direct hiring" process. This allowed PBA teams like Talk 'N Text and Tanduay to negotiate directly with MBA players or MBA prospects (like Asi Taulava and Sonny Alvarado) for their services.

However, the league folded on 2002 due to extremely high expenses on funding a regional basketball league, and most especially when broadcast partner ABS-CBN
ABS-CBN
ABS–CBN Corporation is a Philippine-based media conglomerate. It is the Philippines' largest media and entertainment conglomerate. The corporation was the merger of Alto Broadcasting System which at that time owned by James Lindenberg and Antonio Quirino, and the Chronicle Broadcasting Network ...
withdrew funding for the league. Several players went to the semi-professional Philippine Basketball League
Philippine Basketball League
The Philippine Basketball League is a commercial semi-professional basketball league in the Philippines. The league is composed of several commercial teams with several collegiate and provincial stars.-History:...
en route to the PBA.

The MBA has a season similarly styled to that of the National Basketball Association
National Basketball Association
The National Basketball Association is the pre-eminent men's professional basketball league in North America. It consists of thirty franchised member clubs, of which twenty-nine are located in the United States and one in Canada...
. The teams are grouped into two conferences: Northern (Luzon
Luzon
Luzon is the largest island in the Philippines. It is located in the northernmost region of the archipelago, and is also the name for one of the three primary island groups in the country centered on the Island of Luzon...
and Metro Manila
Metro Manila
Metropolitan Manila , the National Capital Region , or simply Metro Manila, is the metropolitan region encompassing the City of Manila and its surrounding areas in the Philippines...
) and Southern (Visayas
Visayas
The Visayas or Visayan Islands and locally known as Kabisay-an gid, is one of the three principal geographical divisions of the Philippines, along with Mindanao and Luzon. It consists of several islands, primarily surrounding the Visayan Sea, although the Visayas are considered the northeast...
/Mindanao
Mindanao
Mindanao is the second largest and easternmost island in the Philippines. It is also the name of one of the three island groups in the country, which consists of the island of Mindanao and smaller surrounding islands. The other two are Luzon and the Visayas. The island of Mindanao is called The...
).

The MBA had adopted several methods of determining its champion. The season concludes with the MBA National Finals, where the Northern Conference champion faces the Southern Conference champion to decide the MBA Championship and also the All-Star Game was the oldest competition in the league and others like Three-point shootout and Slam Dunk Contest.