Encyclopedia
A memory card or flash card is an electronic flash memory
Flash memory
Flash memory is a non-volatile computer storage chip that can be electrically erased and reprogrammed. It was developed from EEPROM and must be erased in fairly large blocks before these can be rewritten with new data...
data storage device
Data storage device
thumb|200px|right|A reel-to-reel tape recorder .The magnetic tape is a data storage medium. The recorder is data storage equipment using a portable medium to store the data....
used for storing digital information. They are commonly used in many electronic devices, including digital camera
Digital camera
A digital camera is a camera that takes video or still photographs, or both, digitally by recording images via an electronic image sensor. It is the main device used in the field of digital photography...
s, mobile phone
Mobile phone
A mobile phone is a device which can make and receive telephone calls over a radio link whilst moving around a wide geographic area. It does so by connecting to a cellular network provided by a mobile network operator...
s, laptop computer
Laptop
A laptop, also called a notebook, is a personal computer for mobile use. A laptop integrates most of the typical components of a desktop computer, including a display, a keyboard, a pointing device and speakers into a single unit...
s, MP3 players, and video game console
Video game console
A video game console is an interactive entertainment computer or customized computer system that produces a video display signal which can be used with a display device to display a video game...
s. They are small, re-recordable, and able to retain data without power.

PC Card
PC Card
In computing, PC Card is the form factor of a peripheral interface designed for laptop computers. The PC Card standard was defined and developed by the Personal Computer Memory Card International Association which itself was created by a number of computer industry companies in the United States...
s (PCMCIA) were among first commercial memory card formats (type I cards) to come out in the 1990s, but are now mainly used in industrial applications and to connect I/O devices such as modem
Modem
A modem is a device that modulates an analog carrier signal to encode digital information, and also demodulates such a carrier signal to decode the transmitted information. The goal is to produce a signal that can be transmitted easily and decoded to reproduce the original digital data...
s. In 1990s, a number of memory card formats smaller than PC Card arrived, including CompactFlash
CompactFlash
CompactFlash is a mass storage device format used in portable electronic devices. Most CompactFlash devices contain flash memory in a standardized enclosure. The format was first specified and produced by SanDisk in 1994...
, SmartMedia
SmartMedia
SmartMedia is a flash memory card standard owned by Toshiba, with capacities ranging from 2 MB to 128 MB. SmartMedia memory cards are no longer manufactured.- History :...
, and Miniature Card
Miniature Card
Miniature Card or MiniCard is a flash or SRAM memory card standard first promoted by Intel Corp. in 1995 and backed by Advanced Micro Devices, Fujitsu and Sharp Electronics. Miniature Card Implementers Forum promoted this standard for consumer electronics: PDA/Palmtops, Digital Audio Recorders,...
. The desire for smaller cards for cell-phones, PDA
PDA
A PDA is most commonly a Personal digital assistant, also known as a Personal data assistant, a mobile electronic device.PDA may also refer to:In science, medicine and technology:...
s, and compact digital cameras drove a trend that left the previous generation of "compact" cards looking big. In digital cameras SmartMedia and CompactFlash had been very successful, in 2001 SM alone captured 50% of the digital camera market and CF had a stranglehold on professional digital cameras. By 2005 however, SD/MMC had nearly taken over SmartMedia's spot, though not to the same level and with stiff competition coming from Memory Stick variants, as well as CompactFlash. In industrial fields, even the venerable PC card (PCMCIA) memory cards still manage to maintain a niche
Niche market
A niche market is the subset of the market on which a specific product is focusing; therefore the market niche defines the specific product features aimed at satisfying specific market needs, as well as the price range, production quality and the demographics that is intended to impact...
, while in mobile phones and PDAs, the memory card market was highly fragmented until 2010 when micro-SD came to dominate new high-end phones and tablet computer
Tablet computer
A tablet computer, or simply tablet, is a complete mobile computer, larger than a mobile phone or personal digital assistant, integrated into a flat touch screen and primarily operated by touching the screen...
s.

Since 2010 new products of Sony (previously only using Memory Stick) and Olympus (previously only using XD-Card) are offered with an additional SD-Card slot. Effectively the format war
Format war
A format war describes competition between mutually incompatible proprietary formats that compete for the same market, typically for data storage devices and recording formats for electronic media. It is often characterized by political and financial influence on content publishers by the...
has turned in SD-Card's favor.

Overview of all memory card types 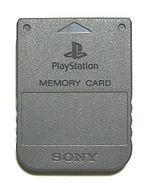 Game consoles originally used proprietary
Proprietary hardware
Proprietary hardware is computer hardware which is owned by the proprietor.Historically, most early computer hardware was designed as proprietary until the 1980s, when IBM PC changed this paradigm...
solid-state
Solid-state drive
A solid-state drive , sometimes called a solid-state disk or electronic disk, is a data storage device that uses solid-state memory to store persistent data with the intention of providing access in the same manner of a traditional block i/o hard disk drive...
memory cards to store the game program and, in some cases, save player progress. In newer home consoles, read-only optical disc
Optical disc
In computing and optical disc recording technologies, an optical disc is a flat, usually circular disc which encodes binary data in the form of pits and lands on a special material on one of its flat surfaces...
s have replaced these custom memory cards for storing the game program, resulting in the need for separate memory cards specifically made to save player progress. These memory cards have also been largely superseded by hard drive storage, internal memory and generic storage devices/cards. Most portable gaming systems still rely on custom memory cartridges to store program data, due to their low power consumption, smaller physical size and reduced mechanical complexity.