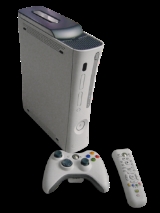 Overview
The Xbox 360 is the second video game console
Video game console
A video game console is an interactive entertainment computer or customized computer system that produces a video display signal which can be used with a display device to display a video game...
produced by Microsoft
Microsoft
Microsoft Corporation is an American public multinational corporation headquartered in Redmond, Washington, USA that develops, manufactures, licenses, and supports a wide range of products and services predominantly related to computing through its various product divisions...
and the successor to the Xbox
Xbox
The Xbox is a sixth-generation video game console manufactured by Microsoft. It was released on November 15, 2001 in North America, February 22, 2002 in Japan, and March 14, 2002 in Australia and Europe and is the predecessor to the Xbox 360. It was Microsoft's first foray into the gaming console...
. The Xbox 360 competes with Sony
Sony
, commonly referred to as Sony, is a Japanese multinational conglomerate corporation headquartered in Minato, Tokyo, Japan and the world's fifth largest media conglomerate measured by revenues....
's PlayStation 3
PlayStation 3
The is the third home video game console produced by Sony Computer Entertainment and the successor to the PlayStation 2 as part of the PlayStation series. The PlayStation 3 competes with Microsoft's Xbox 360 and Nintendo's Wii as part of the seventh generation of video game consoles...
and Nintendo
Nintendo
is a multinational corporation located in Kyoto, Japan. Founded on September 23, 1889 by Fusajiro Yamauchi, it produced handmade hanafuda cards. By 1963, the company had tried several small niche businesses, such as a cab company and a love hotel....
's Wii
Wii
The Wii is a home video game console released by Nintendo on November 19, 2006. As a seventh-generation console, the Wii primarily competes with Microsoft's Xbox 360 and Sony's PlayStation 3. Nintendo states that its console targets a broader demographic than that of the two others...
as part of the seventh generation
History of video game consoles (seventh generation)
In the history of video games, the seventh generation of consoles is the current generation , and includes consoles released since late by Nintendo, Microsoft, and Sony...
of video game consoles. As of September 30, 2011, 57.6 million Xbox 360 consoles have been sold worldwide.

The Xbox 360 was officially unveiled on MTV
MTV
MTV, formerly an initialism of Music Television, is an American network based in New York City that launched on August 1, 1981. The original purpose of the channel was to play music videos guided by on-air hosts known as VJs....
on May 12, 2005, with detailed launch and game information divulged later that month at the Electronic Entertainment Expo (E3).

I want to buy XBOX 360 from Dubai for Pakistan.As in Pakistan pirated cd's are used so i am bit confused whether i buy PAL version of X BOX 360 or NTS...
More
x