Encyclopedia
ExpressCard is an interface to allow peripheral devices
Peripheral
A peripheral is a device attached to a host computer, but not part of it, and is more or less dependent on the host. It expands the host's capabilities, but does not form part of the core computer architecture....
to be connected to a computer
Computer
A computer is a programmable machine designed to sequentially and automatically carry out a sequence of arithmetic or logical operations. The particular sequence of operations can be changed readily, allowing the computer to solve more than one kind of problem...
, usually a laptop computer
Laptop
A laptop, also called a notebook, is a personal computer for mobile use. A laptop integrates most of the typical components of a desktop computer, including a display, a keyboard, a pointing device and speakers into a single unit...
. Formerly called NEWCARD, the ExpressCard standard specifies the design of slots built into the computer and of cards which can be inserted into ExpressCard slots. The cards contain electronic circuit
Electronic circuit
An electronic circuit is composed of individual electronic components, such as resistors, transistors, capacitors, inductors and diodes, connected by conductive wires or traces through which electric current can flow...
ry and connectors to which external devices can be connected. The ExpressCard standard replaces the PC Card
PC Card
In computing, PC Card is the form factor of a peripheral interface designed for laptop computers. The PC Card standard was defined and developed by the Personal Computer Memory Card International Association which itself was created by a number of computer industry companies in the United States...
(also known as PCMCIA) standards.

Hardware that may be plugged into a computer via an ExpressCard includes connect cards, FireWire
IEEE 1394 interface
The IEEE 1394 interface is a serial bus interface standard for high-speed communications and isochronous real-time data transfer, frequently used by personal computers, as well as in digital audio, digital video, automotive, and aeronautics applications. The interface is also known by the brand...
800 (1394B), USB 2.0, USB 3.0 , Ethernet
Ethernet
Ethernet is a family of computer networking technologies for local area networks commercially introduced in 1980. Standardized in IEEE 802.3, Ethernet has largely replaced competing wired LAN technologies....
(even Gigabit Ethernet), Serial ATA
Serial ATA
Serial ATA is a computer bus interface for connecting host bus adapters to mass storage devices such as hard disk drives and optical drives...
external stick drives, solid-state drive
Solid-state drive
A solid-state drive , sometimes called a solid-state disk or electronic disk, is a data storage device that uses solid-state memory to store persistent data with the intention of providing access in the same manner of a traditional block i/o hard disk drive...
s, external enclosures for desktop size PCI Express
PCI Express
PCI Express , officially abbreviated as PCIe, is a computer expansion card standard designed to replace the older PCI, PCI-X, and AGP bus standards...
graphics cards, wireless network interface card
Wireless network interface card
A wireless network interface controller is a network interface controller which connects to a radio-based computer network rather than a wire-based network such as Token Ring or Ethernet. A WNIC, just like other NICs, works on the Layer 1 and Layer 2 of the OSI Model. A WNIC is an essential...
s (NIC), TV tuner card
TV tuner card
A TV tuner card is a kind of television tuner that allows television signals to be received by a computer. Most TV tuners also function as video capture cards, allowing them to record television programs onto a hard disk much like the Tivo digital video recorder does.-Variants: The interfaces for...
s, Common Access Card
Common Access Card
The Common Access Card is a United States Department of Defense smart card issued as standard identification for active-duty military personnel, reserve personnel, civilian employees, other non-DoD government employees, state employees of the National Guard, and eligible contractor personnel.The...
(CAC) readers, and soundcards and many others devices using chips which connects to computer using with USB or PCIe.

Originally developed by the Personal Computer Memory Card International Association (PCMCIA), the ExpressCard standard is maintained by the USB Implementers Forum
USB Implementers Forum
The USB Implementers Forum is a non-profit organisation to promote and support the Universal Serial Bus. Its main activities are the promotion and marketing of USB, Wireless USB, USB On-The-Go, and the maintenance of the specifications, as well as a compliance program.It was formed in 1995 by the...
(USB-IF). The host device supports PCI Express
PCI Express
PCI Express , officially abbreviated as PCIe, is a computer expansion card standard designed to replace the older PCI, PCI-X, and AGP bus standards...
, USB 2.0
Universal Serial Bus
USB is an industry standard developed in the mid-1990s that defines the cables, connectors and protocols used in a bus for connection, communication and power supply between computers and electronic devices....
, and SuperSpeed USB
USB 3.0
USB 3.0 is the second major revision of the Universal Serial Bus standard for computer connectivity.USB 3.0 has transmission speeds of up to 5 Gbit/s, which is 10 times faster than USB 2.0 . USB 3.0 significantly reduces the time required for data transmission, reduces power consumption, and...
(ExpressCard 2.0 only) connectivity through the ExpressCard slot; cards can be designed to use any of these modes. The cards are hot-pluggable
Hot swapping
Hot swapping and hot plugging are terms used to describe the functions of replacing computer system components without shutting down the system...
. The ExpressCard standard is an open standard
Open standard
An open standard is a standard that is publicly available and has various rights to use associated with it, and may also have various properties of how it was designed . There is no single definition and interpretations vary with usage....
by ITU-T
ITU-T
The ITU Telecommunication Standardization Sector is one of the three sectors of the International Telecommunication Union ; it coordinates standards for telecommunications....
definition, and can be obtained from the USB-IF website free of charge. 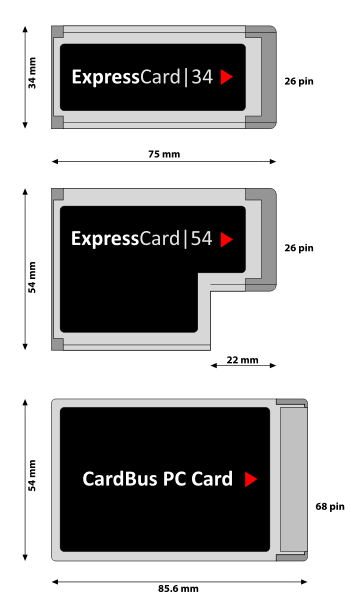 The ExpressCard standard specifies two form factors, ExpressCard/34 (34 mm wide) and ExpressCard/54 (54 mm wide, in an L-shape)—the connector is the same on both (34 mm wide). Standard cards are 75 mm long (10.6 mm shorter than CardBus) and 5 mm thick, but may be thicker on sections that extend outside the standard form for Antennas
Antenna (radio)
An antenna is an electrical device which converts electric currents into radio waves, and vice versa. It is usually used with a radio transmitter or radio receiver...
, sockets, etc.


Comparison to other standards

The older PC Cards came in 16-bit and the later 32-bit CardBus designs. The major benefit of the ExpressCard over the PC card is more bandwidth, due to the ExpressCard's direct connection to the system bus over a PCI Express ×1 lane and USB 2.0, while CardBus cards only interface with PCI. The ExpressCard has a maximum throughput of 2.5 Gbit/s through PCI Express and 480 Mbit/s through USB 2.0 dedicated for each slot, while all CardBus devices connected to a computer share a total 1.06 Gbit/s bandwidth.

The ExpressCard standard specifies voltages of either 1.5 V or 3.3 V; CardBus slots can use 3.3 V or 5.0 V. The ExpressCard FAQ claims lower cost, better scalability, and better integration with motherboard chipset technology than Cardbus. PCMCIA devices can be connected to an ExpressCard slot via an adapter.

When the PC Card was introduced, the only other way to connect peripherals to a laptop computer was via obsolescent RS232 and parallel port
Parallel port
A parallel port is a type of interface found on computers for connecting various peripherals. In computing, a parallel port is a parallel communication physical interface. It is also known as a printer port or Centronics port...
s of limited performance, so it was widely adopted for many peripherals. More recently, virtually all laptop equipment has 480 Mbit/s Hi-Speed USB 2.0 ports, and most types of peripheral which formerly used a PC Card connection are available for USB, making the ExpressCard less necessary than the PC Card was in its day. Some laptop computers do not have an ExpressCard slot.

An ExpressCard slot had been commonly included on high-end laptops made since 2006:

Because of the lack of backward compatibility, some laptop manufacturers have chosen to release models incorporating both CardBus (PCMCIA, PC Card) and ExpressCard slots. These include certain models of Acer Aspire
Acer Aspire
Aspire is a series of personal computers by Acer Inc. aimed at the casual household user or for small business use. The Aspire series covers both desktop computers and laptops...
, Acer Extensa
Acer Extensa
Acer Extensa series is a line of Acer laptops that manufactured in People's Republic of China and designed for business and professional users. Its competitors include the Dell Latitude range and some laptops from Lenovo...
, Toshiba Satellite
Toshiba Satellite
The Toshiba Satellite is Toshiba's line of consumer-grade notebook computers. Models in the Satellite family vary greatly, ranging from entry-level models to full-fledged media center-class notebooks...
, Dell Latitude
Dell Latitude
Latitude is Dell's business laptop brand, designed and manufactured mainly by Compal and Quanta.-Overview and product type:The Dell Latitude is targeted for business use. This means that standardized parts are used throughout the line and are available for several years for support purposes...
and Precision, MSI S42x and Lenovo ThinkPad Z60m
Thinkpad Z60m
ThinkPad Z60m is the second model in the Lenovo ThinkPad Z series which, as of May 2006, consists of the Z60t and Z60m. These models are the first ThinkPads to feature a Widescreen aspect ratio. All Z60m devices have integrated WiFi connectivity, a Shock Mounted hard disk drive, a Magnesium...
, R52, T60 and R61.

A large number of ExpressCard devices were presented at the CeBit trade show in Germany
Germany
Germany , officially the Federal Republic of Germany , is a federal parliamentary republic in Europe. The country consists of 16 states while the capital and largest city is Berlin. Germany covers an area of 357,021 km2 and has a largely temperate seasonal climate...
in March 2005. In November 2006, Belkin
Belkin
Belkin International, Inc., is a Californian manufacturer of computer hardware that specializes in connectivity devices, headquartered in Playa Vista, Los Angeles, California...
announced that it is launching the first ExpressCard docking station
Docking station
A Docking station or port replicator or dock provides a simplified way of “plugging-in” an electronic device such as a laptop computer to common peripherals...
, which uses the PCIe part of an ExpressCard connection to enable 1600x1200 video and the USB part to provide USB, audio and network ports. This points to the ability for ExpressCard to allow more capable non-OEM docking stations for laptop computers.

In 2007, Sony introduced its Vaio TZ model, which incorporates ExpressCards. Also the Sony Vaio FZ and Vaio Z series have the ExpressCard/34 Slot integrated in them. Sony also uses the ExpressCard/34 form factor for the flash memory modules in its XDCAM EX/SxS
SxS
SxS is a flash memory standard compliant to the Sony and Sandisk-created ExpressCard standard. According to Sandisk and Sony, the cards have transfer rates of 800 Mbit/s and burst transfer rate of up to 2.5 Gbit/s...
based camcorders, making the copying of video data between these cameras and ExpressCard-equipped laptops easier. For this reason, Sony also offers a USB-based SxS reader for desktop computers.