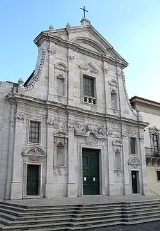 Encyclopedia
Melfi is a town and comune
Comune
In Italy, the comune is the basic administrative division, and may be properly approximated in casual speech by the English word township or municipality.-Importance and function:...
in the Vulture area
Vulture area
The Vulture is a geographical and historical subregion of Italy that lies in the Province of Potenza, Basilicata region.-Overview:...
of the province of Potenza
Province of Potenza
The Province of Potenza is a province in the Basilicata region of Italy. Its capital is the city of Potenza.-Geography:It has an area of 6,545 km² and a total population of 387,107 . There are 100 comuni in the province .-History:In 272 B.C. the province was conquered by the Greek army...
, in the Southern Italian region of Basilicata
Basilicata
Basilicata , also known as Lucania, is a region in the south of Italy, bordering on Campania to the west, Apulia to the north and east, and Calabria to the south, having one short southwestern coastline on the Tyrrhenian Sea between Campania in the northwest and Calabria in the southwest, and a...
.

On a hill at the foot of Mount Vulture
Monte Vulture
Mount Vulture is an extinct volcano located 56 km north of the city Potenza in the Basilicata region . As a prominent landmark it gave its name to the Vulture region, the most significant viticultural zone in Basilicata growing the DOC wine Aglianico del Vulture.With a height of 1326 m, it is...
, Melfi is the most important town in Basilicata's Vulture, both as a tourist resort and economic centre.

Inhabited by the Daunians and Lucanians
Lucani (ancient people)
The Lucani were an ancient people of Italy, living in Lucania, who spoke an Oscan language, a member of the Italic languages.-Society:...
, under the Romans
Ancient Rome
Ancient Rome was a thriving civilization that grew on the Italian Peninsula as early as the 8th century BC. Located along the Mediterranean Sea and centered on the city of Rome, it expanded to one of the largest empires in the ancient world....
it was included in the area of the colony of Venusia, founded in 291 BC. After the fall of Western Roman Empire
Western Roman Empire
The Western Roman Empire was the western half of the Roman Empire after its division by Diocletian in 285; the other half of the Roman Empire was the Eastern Roman Empire, commonly referred to today as the Byzantine Empire....
, Melfi gained importance in the Middle Ages
Middle Ages
The Middle Ages is a periodization of European history from the 5th century to the 15th century. The Middle Ages follows the fall of the Western Roman Empire in 476 and precedes the Early Modern Era. It is the middle period of a three-period division of Western history: Classic, Medieval and Modern...
as a strategic point between areas controlled by the Byzantines and those controlled by the Lombards
Lombards
The Lombards , also referred to as Longobards, were a Germanic tribe of Scandinavian origin, who from 568 to 774 ruled a Kingdom in Italy...
. Melfi was captured several times by the struggling powers of the region, until it was assigned to the Norman leader William I of Hauteville. The Hauteville family started from here their conquest of southern Italy, which, in the early 12th century, led to the creation of the Kingdom of Sicily
Kingdom of Sicily
The Kingdom of Sicily was a state that existed in the south of Italy from its founding by Roger II in 1130 until 1816. It was a successor state of the County of Sicily, which had been founded in 1071 during the Norman conquest of southern Italy...
.

In 1059 Melfi became the capital of the Duchy of Apulia. Papal counciles were held in the city in the same year and in 1109.

In 1231, Emperor Frederick II
Frederick II, Holy Roman Emperor
Frederick II , was one of the most powerful Holy Roman Emperors of the Middle Ages and head of the House of Hohenstaufen. His political and cultural ambitions, based in Sicily and stretching through Italy to Germany, and even to Jerusalem, were enormous...
proclaimed the Constitutions of Melfi
Constitutions of Melfi
The Constitutions of Melfi, or Liber Augustalis, were a new legal code for the Kingdom of Sicily promulgated on 1 September 1231 by Emperor Frederick II. It was given at Melfi, the town from which Frederick's Norman ancestors had first set out to conquer the Mezzogiorno two centuries earlier...
(or Constitutiones Augustales) here, reinforcing control over his ever-expanding territory. He created a bureaucracy of paid officials, who among other things imposed a tax system on the local feudal rulers, who resented it but could not resist.

The town enjoyed a revival of sorts from the beginning of the 19th century, and recently has gained additional prosperity when the Italian auto firm, FIAT
Fiat
FIAT, an acronym for Fabbrica Italiana Automobili Torino , is an Italian automobile manufacturer, engine manufacturer, financial, and industrial group based in Turin in the Italian region of Piedmont. Fiat was founded in 1899 by a group of investors including Giovanni Agnelli...
, built a factory here. 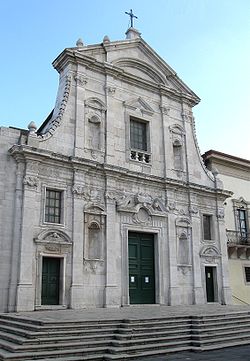 The town winds along the Norman walls, with various gates, the most noteworthy being the Venosina gate (dating to the early 13th century), an ogival arch with two cylindrical towers on either side.