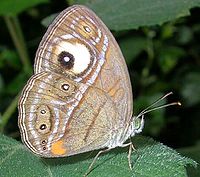 An eyespot is an eye
Eye
Eyes are organs that detect light and convert it into electro-chemical impulses in neurons. The simplest photoreceptors in conscious vision connect light to movement...
-like marking. They are found on butterflies, reptiles, birds and fish. In members of the Felidae
Felidae
Felidae is the biological family of the cats; a member of this family is called a felid. Felids are the strictest carnivores of the thirteen terrestrial families in the order Carnivora, although the three families of marine mammals comprising the superfamily pinnipedia are as carnivorous as the...
family (such as the Leopard Cat
Leopard Cat
The leopard cat is a small wild cat of South and East Asia. Since 2002 it has been listed as Least Concern by IUCN as it is widely distributed but threatened by habitat loss and hunting in parts of its range...
and Leopard
Leopard
The leopard , Panthera pardus, is a member of the Felidae family and the smallest of the four "big cats" in the genus Panthera, the other three being the tiger, lion, and jaguar. The leopard was once distributed across eastern and southern Asia and Africa, from Siberia to South Africa, but its...
), the white circular markings on the backs of the ears are termed ocelli, and they are functionally similar to eyespots in other animals.

Eyespots may be a form of automimicry in which a spot on the body of an animal resembles an eye of a different animal to deceive potential predator or prey species; to draw a predator's attention away from the most vulnerable body parts; or to appear as an inedible or even dangerous animal. In larger animals, eyespots may play a role in intraspecies communication or courtship – the most well-known example is probably the eyespots on a peacock's display feathers. The white spots on the back of Felid ears serve a social function, by communicating the animal's mental state (excited, calm, aggressive, etc.) to conspecifics in the gloom of dense forest or in tall grass.

The eye-like markings in some butterflies and moths
Lepidoptera
Lepidoptera is a large order of insects that includes moths and butterflies . It is one of the most widespread and widely recognizable insect orders in the world, encompassing moths and the three superfamilies of butterflies, skipper butterflies, and moth-butterflies...
and certain other insects, as well as the Sunbittern
Sunbittern
The Sunbittern, Eurypyga helias is a bittern-like bird of tropical regions of the Americas, and the sole member of the family Eurypygidae and genus Eurypyga.-Description and reproduction:...
(a bird
Bird
Birds are feathered, winged, bipedal, endothermic , egg-laying, vertebrate animals. Around 10,000 living species and 188 families makes them the most speciose class of tetrapod vertebrates. They inhabit ecosystems across the globe, from the Arctic to the Antarctic. Extant birds range in size from...
) do not seem to serve a mimic
Mimic
In evolutionary biology, mimicry is the similarity of one species to another which protects one or both. This similarity can be in appearance, behaviour, sound, scent and even location, with the mimics found in similar places to their models....
ry function. In some other cases, the evolution
Evolution
Evolution is any change across successive generations in the heritable characteristics of biological populations. Evolutionary processes give rise to diversity at every level of biological organisation, including species, individual organisms and molecules such as DNA and proteins.Life on Earth...
ary function of such spots is also not understood. There is, however, recent evidence to suggest that eyespots in butterflies serve as an anti-predatory device, by either scaring off potential predators or deflecting attacks away from vital body parts. Butterfly eyespots may also play a role in mate recognition and sexual selection, playing a similar role to the eyespots found on larger organisms mentioned above. Pattern formation
Pattern formation
The science of pattern formation deals with the visible, orderly outcomes of self-organisation and the common principles behind similar patterns....
of concentric
Concentric
Concentric objects share the same center, axis or origin with one inside the other. Circles, tubes, cylindrical shafts, disks, and spheres may be concentric to one another...
spots is probably less complex than the conspicuous eyespots might suggest; it cannot be ruled out that eyespots are simply a morphogenetic "spandrel
Spandrel (biology)
In evolutionary biology, a Spandrel is a phenotypic characteristic that is a byproduct of the evolution of some other characteristic, rather than a direct product of adaptive selection.-Origin of Term:...
" which in any one particular case may or may not have been adapted for a particular function.


Evolution of the eyespot at the molecular Level

Butterfly eyespots are formed as a result of a morphogenetic signaling center, or organizer called the focus
Focus
Focus, FOCUS, or foci may refer to:In science, mathematics or computing:*Focus , selectively concentrating on one aspect of the environment while ignoring other things...
. This signaling center induces its neighboring cells to produce specific pigments which pattern the eyespot. Foci morphology and evolution appears to be the result of an altered regulatory circuit composed of the same patterning mechanisms conserved in insect wing patterning. This altered regulatory circuit is able to pattern both the anterior and posterior eyespots independent of the A/P compartmentalization
Compartmentalization
Compartmentalization or compartmentalisation may refer to:* Compartmentalization * Compartmentalization * Compartmentalization * Compartmentalization...
restrictions. Breaking the highly conserved compartmentalization restrictions put forth by insect wing patterning, by redeployment of early developmental signaling sources like the canonical hedgehog
Hedgehog
A hedgehog is any of the spiny mammals of the subfamily Erinaceinae and the order Erinaceomorpha. There are 17 species of hedgehog in five genera, found through parts of Europe, Asia, Africa, and New Zealand . There are no hedgehogs native to Australia, and no living species native to the Americas...
(Hh) pathway, Distalless (Dll), and engrailed
Engrailed
The Engrailed and Small Engrailed are moths of the family Geometridae. They are distributed across most of Europe. There is an on-going debate as to whether they make up one species, or whether E. crepuscularia actually refers only to the Small Engrailed, with the Engrailed proper being separable...
(en). This altered regulatory circuit is able to pattern both the anterior and posterior eyespots independent of the A/P compartmentalization restrictions through increased localized levels of hh signaling. Increased hh signaling raises expression of its receptor ptc and transcription factor. Normally, in drosophila
Drosophila
Drosophila is a genus of small flies, belonging to the family Drosophilidae, whose members are often called "fruit flies" or more appropriately pomace flies, vinegar flies, or wine flies, a reference to the characteristic of many species to linger around overripe or rotting fruit...
, engrailed(en) acts in the posterior compartment to restrict ptc and ci expression to the anterior compartment by repressing transcription of ci, thereby preventing expression of ptc. However, This rogue expression of ptc and ci seen in the posterior compartment of some butterfly wing disks, is an indication that during the evolution of eyespots, there was a divergence in the repression or expression of these genes from that of drosophila. From an evo-devo perspective, understanding the redeployment and plasticity
Plasticity
Plasticity may refer to:Science* Plasticity , in physics and engineering, plasticity is the propensity of a material to undergo permanent deformation under load...
of already existing regulatory mechanisms in butterfly eyespot loci development may give more insight into a fundamental mechanism for the evolution of novelty structures.

Effects of cautery on the butterfly wing eyespot foci are indicative of a long range signaling mechanism or morphogen gradient, both in its spacial and temporal aspects. Cautery studies have shown that different results in eyespot size and color can result depeding on the time in development at with the cauterizing damage is administered. While these findings support morphogenetic activity, they cannot simply be explained by a source/diffusion model. Observations of cautery have given rise to two different explanations of how eyespots are patterned: 1) A source/threshold model, in which the focus is the morphogen source and, 2) the sink model, in which the focus is generating a gradient by removal of the morphogen at the foci.

Further investigation of genes involved in wing development and morphogenetic activity has led to the discovery that hh has a primary role in the morphogenetic signaling center of the foci. In a manner that is similar to Drosophila, hedgehog (Hh) is expressed in all cells in the posterior compartment of the developing butterfly wing during the mid fifth instar of butterfly wing development. However, in butterflies hh expression is significantly higher in those cells that flank the potential foci. Higher transcription levels of hh along with other known associates of the hh pathway; patched (ptc) the hh receptor, and cubitus interruptus (ci) the hh transcription factor are seen throughout the mid to late fifth instar as well, which further implies a role for hedgehog signaling in eyespot development and patterning. Furthermore, cells that are flanked by the cells expressing the highest level of hh signaling, are fated to become the foci, indicating that foci cell fate determination relies on high concentrations of hh in surrounding cells. 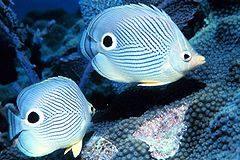 Some fish species also display eyespots. The foureye butterflyfish
Foureye butterflyfish
The Four-eyed Butterflyfish is a butterflyfish . It is alternatively called the Foureye Butterflyfish. This species is found in the Western Atlantic from Massachusetts, USA and Bermuda to the West Indies and northern South America.Chaetodon capistratus is the type species of Chaetodon...
gets its name from a large dark spot on the rear portion of each side of the body. This spot is surrounded by a brilliant white ring, resembling an eyespot. A black vertical bar on the head runs through the true eye, making it hard to see. This can result in a predator thinking the fish is bigger than it is, and confusing the back end with the front end. The butterflyfish's first instinct when threatened is to flee, putting the false eyespot closer to the predator than the head. Most predators aim for the eyes, and this false eyespot tricks the predator into believing that the fish will flee tail first.
The source of this article is wikipedia, the free encyclopedia.  The text of this article is licensed under the GFDL.