Mdina, Città Vecchia, or Città Notabile, (Notabile, or ) is the old capital of Malta
Malta
Malta , officially known as the Republic of Malta , is a Southern European country consisting of an archipelago situated in the centre of the Mediterranean, south of Sicily, east of Tunisia and north of Libya, with Gibraltar to the west and Alexandria to the east.Malta covers just over in...
. Mdina is a medieval walled town situated on a hill in the centre of the island. Punic remains uncovered beyond the city’s walls suggest the importance of the general region to Malta’s Phoenicia
Phoenicia
Phoenicia , was an ancient civilization in Canaan which covered most of the western, coastal part of the Fertile Crescent. Several major Phoenician cities were built on the coastline of the Mediterranean. It was an enterprising maritime trading culture that spread across the Mediterranean from 1550...
n settlers. Mdina is commonly called the "Silent City" by natives and visitors. The town is still confined within its walls, and has a population of less than three hundred, but it is contiguous with the village of Rabat, which takes its name from the Arabic word for suburb, and has a population of over 11,000.

Mdina was inhabited and possibly first fortified by the Phoenicians around 700 BC. The Phoenicians called it Maleth. The region benefits from its strategic location on one of the island's highest points and at maximum distance from the sea. Under the Roman Empire Malta became a Municipium and the Roman Governor built his palace in Mdina. Tradition holds that the Apostle St. Paul
Paul of Tarsus
Paul the Apostle , also known as Saul of Tarsus, is described in the Christian New Testament as one of the most influential early Christian missionaries, with the writings ascribed to him by the church forming a considerable portion of the New Testament...
resided in the city after his historical shipwreck on the islands. Much of its present architecture reflects the Fatimid
Fatimid
The Fatimid Islamic Caliphate or al-Fāṭimiyyūn was a Berber Shia Muslim caliphate first centered in Tunisia and later in Egypt that ruled over varying areas of the Maghreb, Sudan, Sicily, the Levant, and Hijaz from 5 January 909 to 1171.The caliphate was ruled by the Fatimids, who established the...
Period which began in 999 AD until the Norman
Normans
The Normans were the people who gave their name to Normandy, a region in northern France. They were descended from Norse Viking conquerors of the territory and the native population of Frankish and Gallo-Roman stock...
conquest of Malta in 1091 AD. The Normans surrounded the city with thick defensive fortifications and widened the moat
Moat
A moat is a deep, broad ditch, either dry or filled with water, that surrounds a castle, other building or town, historically to provide it with a preliminary line of defence. In some places moats evolved into more extensive water defences, including natural or artificial lakes, dams and sluices...
. The city was also separated from its nearest town, Rabat
Rabat, Malta
Rabat is a village just outside Mdina, Malta. The name of the village is derived from the Arabic word for 'suburb': الرباط, as it was the suburb of the old capital Mdina. Half of the present-day village core also formed part of the Roman city of Melita, before the latter was resized during the...
.

Malta passed to the Order of Knights of the Hospital of St John of Jerusalem
Knights Hospitaller
The Sovereign Military Hospitaller Order of Saint John of Jerusalem of Rhodes and of Malta , also known as the Sovereign Military Order of Malta , Order of Malta or Knights of Malta, is a Roman Catholic lay religious order, traditionally of military, chivalrous, noble nature. It is the world's...
in 1530 AD. Mdina hosted the public ceremony in which each Grand Master swore an oath to protect the Maltese Islands and the rights of his subjects. A strong earthquake in 1693
1693 Sicily earthquake
The 1693 Sicily earthquake refers to a powerful earthquake that struck parts of southern Italy, notably Sicily, Calabria and Malta on January 11, 1693 around 9 pm local time. This earthquake was preceded by a damaging foreshock on January 9th...
led to the introduction of Baroque
Baroque
The Baroque is a period and the style that used exaggerated motion and clear, easily interpreted detail to produce drama, tension, exuberance, and grandeur in sculpture, painting, literature, dance, and music...
design within the cityscape. The Knights of Malta rebuilt the cathedral, to the designs of Maltese architect Lorenzo Gafa
Lorenzo Gafà
Lorenzo Gafà was a Maltese baroque architect.Born in Vittoriosa , Gafà began his working life as a stone carver and his brother was the renowned sculptor Melchiorre. By the early 1660s he had developed a strong interest in architectural design and in 1661 is known to have been involved in the...
. Palazzo Falzon, the Magisterial Palace and major restoration works are other projects undertaken by the Knights. The monumental gateway was designed by the French architect and military engineer Charles François de Mondion
Charles François de Mondion
Charles Francois de Mondion was a French military engineer who first arrived in Malta in 1715 during the principate of Grand Master Ramon Perellos y Roccaful of the Knights of Malta. His early work was as deputy to the Military Engineer Rene Jacob de Tigne...
in 1724. Also, the entrance found today is not the original one, as the original south gate is about 100 meters to the left.

Most of Mdina's palaces serve as private homes. The impressive Cathedral of the Conversion of St Paul
St. Paul's Cathedral, Mdina
St. Paul's Cathedral is a Roman Catholic cathedral in the city of Mdina, in Malta. It is built on the site where governor Publius was reported to have met Saint Paul following his shipwreck off the Maltese coast.-History:...
is fronted by a large square. Only a limited number of resident and emergency vehicles, wedding cars and hearses are allowed within Mdina. 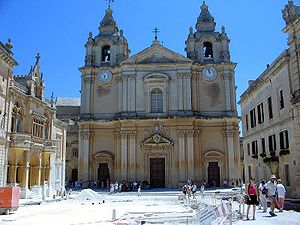 In White Wolf
White Wolf
White Wolf is a publisher of role-playing games, notably the World of Darkness.White Wolf may also refer to:*White Wolf , a location in Yosemite National Park*White Wolf , a Canadian heavy metal band...
's World of Darkness
World of Darkness
"World of Darkness" is the name given to three related but distinct fictional universes created as settings for supernatural horror themed role-playing games. It is also the name of roleplaying games in the second and third settings...
, Mdina is the European capital of clan Lasombra
Lasombra
The Lasombra are a clan of vampires, associated with the Sabbat, from White Wolf Game Studio's Vampire: The Masquerade books and role-playing games.The Lasombra are in many ways the Sabbat's answer to the Ventrue Clan...
.
In the Anthony Horowitz
Anthony Horowitz
Anthony Craig Horowitz is an English novelist and screenwriter. He has written many children's novels, including The Power of Five, Alex Rider and The Diamond Brothers series and has written over fifty books. He has also written extensively for television, adapting many of Agatha Christie's...
's Alex Rider
Alex Rider
Alex Rider is a series of spy novels by British author Anthony Horowitz about a 14-15 year old spy named Alex Rider. The series is aimed primarily at young adults. Nine novels have been published to date, as well as three graphic novels, three short stories and a supplementary book...
series, Mdina is the site of an "ambush" where MI6 intends to retrieve Alex's father John Rider.
In the HBO series Game of Thrones
Game of Thrones (TV series)
Game of Thrones is an American medieval fantasy television series created for HBO by David Benioff and D. B. Weiss. Based on author George R. R. Martin's best-selling A Song of Ice and Fire series of fantasy novels, the first of which is called A Game of Thrones, the television series debuted in...
, Mdina was the filming location for the series' fictional capital city of King's Landing.

Mdina (together with Birgu
Birgu
Birgu is an ancient city in Malta. It played a vital role in the Siege of Malta in 1565. Its population stood at 2,633 in December 2008.-History:...
and Gozo
Gozo
Gozo is a small island of the Maltese archipelago in the Mediterranean Sea. The island is part of the Southern European country of Malta; after the island of Malta itself, it is the second-largest island in the archipelago...
) plays a significant role in The Disorderly Knights, the third book of the acclaimed Lymond Chronicles
Lymond Chronicles
The Lymond Chronicles is a series of six novels, written by Dorothy Dunnett, which were first published between 1961 and 1975. The series is set in mid-sixteenth century Europe and the Mediterranean and tells the story of a young Scottish nobleman, Francis Crawford of Lymond, from 1547 through...
by Dorothy Dunnett
Dorothy Dunnett
Dorothy Dunnett OBE was a Scottish historical novelist. She is best known for her six-part series about Francis Crawford of Lymond, The Lymond Chronicles, which she followed with the eight-part prequel The House of Niccolò...
, which is set around the events of the Dragut Raid of 1551 when the Ottomans
Ottoman Empire
The Ottoman EmpireIt was usually referred to as the "Ottoman Empire", the "Turkish Empire", the "Ottoman Caliphate" or more commonly "Turkey" by its contemporaries...
briefly besieged the city.
The source of this article is wikipedia, the free encyclopedia.  The text of this article is licensed under the GFDL.