Maynooth is located on the R148 road
Roads in Ireland
The island of Ireland, comprising Northern Ireland and the Republic of Ireland, has an extensive network of tens of thousands of kilometres of public roads, usually surfaced. These roads have been developed and modernised over centuries, from trackways suitable only for walkers and horses, to...
between Leixlip
Leixlip
-Politics:Since 1988 Leixlip has had a nine member Town Council , headed by a Cathaoirleach , which has control over many local matters, although it is limited in that it is not also a planning authority...
and Kilcock
Kilcock
Kilcock or Killcock is a town and townland in the north of County Kildare, Ireland, on the border with County Meath. Kilcock is a dormitory town for many of those who work in Dublin...
25Km West of Dublin City, with the M4 motorway bypassing the town. Other roads connect the town to Celbridge
Celbridge
Celbridge is a town and townland on the River Liffey in County Kildare, Ireland. It is west of Dublin. As a town within the Dublin Metropolitan Area and the Greater Dublin Area, it is located at the intersection of the R403 and R405 regional roads....
, Clane
Clane
Clane is a town on the River Liffey and in the barony of Clane in County Kildare, Ireland, from Dublin.Its population of 4,968 makes it the eighth largest town in Kildare and the 78th largest in the Republic of Ireland....
, and Dunboyne
Dunboyne
Dunboyne is a town in County Meath in Ireland. For the most part, it is a dormitory town for the city of Dublin.-Location:Dunboyne is centred on the crossroads formed by the R156 regional road and the old Maynooth Road ....
. Maynooth is also on the Dublin to Sligo rail line and is served by a commuter train service.

Maynooth was a long-term centre for the Geraldine family, who dominated Irish affairs in various periods.

In the 1920s, the town was the unofficial home to the King of England's representative in Ireland, Domhnall Ua Buachalla, who declined to take up official residence in the Viceregal Lodge in the Phoenix Park
Phoenix Park
Phoenix Park is an urban park in Dublin, Ireland, lying 2–4 km west of the city centre, north of the River Liffey. Its 16 km perimeter wall encloses , one of the largest walled city parks in Europe. It includes large areas of grassland and tree-lined avenues, and since the seventeenth...
, and whose family operated a hardware store in the town until 2005, the only store with an Irish language
Irish language
Irish , also known as Irish Gaelic, is a Goidelic language of the Indo-European language family, originating in Ireland and historically spoken by the Irish people. Irish is now spoken as a first language by a minority of Irish people, as well as being a second language of a larger proportion of...
name in the town for many years.

The town has, at either end of the main street, Maynooth Castle
Maynooth Castle
Maynooth Castle is a castle in Maynooth, County Kildare, Ireland.The castle was built before the middle of the 13th century and was the home of the Fitzgerald family from 1176 until the 1534 rebellion of Silken Thomas, the son of the ninth Earl of Kildare...
and Carton House
Carton House
Carton House was one of Ireland's greatest stately homes and one time ancestral seat of the Earls of Kildare and Dukes of Leinster. Located west of Dublin, in Maynooth, County Kildare, the Carton demesne runs to 1,100 acres . For two hundred years it possessed the finest example in Ireland of a...
: two former seats of the Dukes of Leinster. The castle was a stronghold of the 16th century historical figure Thomas FitzGerald, 10th Earl of Kildare
Thomas FitzGerald, 10th Earl of Kildare
Thomas FitzGerald, 10th Earl of Kildare , also known as Silken Thomas , was a figure in Irish history.He spent a considerable part of his early life in England: his mother Elizabeth Zouche, was a cousin of Henry VII...
better known as Silken Thomas. The castle was overrun in 1535, after the rebellion of the Earl.

The village is just inside the western edge of The Pale
The Pale
The Pale or the English Pale , was the part of Ireland that was directly under the control of the English government in the late Middle Ages. It had reduced by the late 15th century to an area along the east coast stretching from Dalkey, south of Dublin, to the garrison town of Dundalk...
.

The famed Conolly's Folly
Conolly's Folly
Conolly's Folly , a.k.a. The Obelisk or originally The Conolly Folly, is an obelisk structure located near Celbridge and Maynooth, both in north County Kildare, Ireland.-History:...
is also near the town, although it is arguably in Celbridge
Celbridge
Celbridge is a town and townland on the River Liffey in County Kildare, Ireland. It is west of Dublin. As a town within the Dublin Metropolitan Area and the Greater Dublin Area, it is located at the intersection of the R403 and R405 regional roads....
, as it is much closer to it, but is covered by Maynooth's very extensive town boundaries. It was known to be the gateway to the west as the main route from Dublin.

The population of 10,715 (2006 Census) makes it the fifth largest village in Kildare and the 35th largest in the Republic of Ireland
Republic of Ireland
Ireland , described as the Republic of Ireland , is a sovereign state in Europe occupying approximately five-sixths of the island of the same name. Its capital is Dublin. Ireland, which had a population of 4.58 million in 2011, is a constitutional republic governed as a parliamentary democracy,...
. Measurement can be difficult as much of the village's population is transient – students at NUI Maynooth or St. Patrick's College
St Patrick's College, Maynooth
St Patrick's College, Maynooth is the "National Seminary for Ireland" , and a Pontifical University, located in the village of Maynooth, 15 miles from Dublin, Ireland. The college and seminary are often referred to as Maynooth College. The college was officially established as the Royal College...
, or temporary employees at the nearby Intel and Hewlett Packard facilities (both located in Leixlip
Leixlip
-Politics:Since 1988 Leixlip has had a nine member Town Council , headed by a Cathaoirleach , which has control over many local matters, although it is limited in that it is not also a planning authority...
). 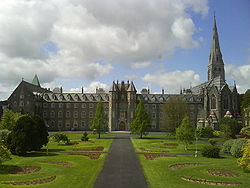 The town contains a fire station, in addition to the area's part time Garda
Garda Síochána
, more commonly referred to as the Gardaí , is the police force of Ireland. The service is headed by the Commissioner who is appointed by the Irish Government. Its headquarters are located in the Phoenix Park in Dublin.- Terminology :...
station, a health centre, a branch library, a Credit Union
Credit union
A credit union is a cooperative financial institution that is owned and controlled by its members and operated for the purpose of promoting thrift, providing credit at competitive rates, and providing other financial services to its members...
and was formerly home to the worlds 4th largest hamster wheel. In the mid-1980s the town gained some minor fame for having the first callcard phones in Ireland.

Maynooth is on the Royal Canal, navigable from central Dublin to this point, now used mostly for leisure purposes. It provided an important stopping point before Dublin in the period directly before the coming of the railways to Ireland in the first half of the 19th century. The harbour, known locally as Dukes Harbour is roughly triangular in shape and on the north side of the canal, opposite the railway station is a popular fishing area.

Maynooth station
Maynooth railway station
Maynooth railway station serves the town of Maynooth in north County Kildare, Ireland. It is situated on the south side of the Royal Canal, opposite Dukes' Harbour...
is one of the busiest in the Dublin / Kildare region, serving as it does two major educational institutions. The town is the terminus of most Iarnród Éireann
Iarnród Éireann
Iarnród Éireann is the national railway system operator of Ireland. Established on 2 February 1987, it is a subsidiary of Córas Iompair Éireann . It operates all internal intercity, commuter and freight railway services in the Republic of Ireland, and, jointly with Northern Ireland Railways, the...
Western Commuter, as well as a being served by the Sligo InterCity
InterCity
InterCity is the classification applied to certain long-distance passenger train services in Europe...
service. Dublin Bus
Dublin Bus
Dublin Bus is a public transport operator in Ireland. It operates an extensive bus network of 172 radial, cross-city and peripheral routes and 18 night routes in the city of Dublin and the Greater Dublin Area. The company, established in 1987, is a subsidiary of Córas Iompair Éireann which is...
and Bus Éireann services also serve the town. A number of private operators also serve the town, linking it with nearby towns and cities.

The North Kildare Rugby Club is the local rugby club and is situated about 3 km from Maynooth on the Kilcock
Kilcock
Kilcock or Killcock is a town and townland in the north of County Kildare, Ireland, on the border with County Meath. Kilcock is a dormitory town for many of those who work in Dublin...
road.

Maynooth Native Bob Casey
Bob Casey (rugby player)
Bob Casey is an Irish rugby union footballer who plays at lock for London Irish. Casey is originally from Maynooth, County Kildare, and was educated at Blackrock College, a Dublin secondary school renowned for producing international rugby players.-Club career:Casey joined Leinster in 1999 and...
is a professional rugby player and Ireland international. Casey has represented Ireland at Schools, U19, U21, Ireland 'A' and U25 levels. He made his senior debut against Australia in 1999.
Casey has six caps for Ireland. When he played for Ireland against Canada in May 2009, it was his first cap since 2000.
He Currently Plays for London Irish.

He has also played for the Barbarians.