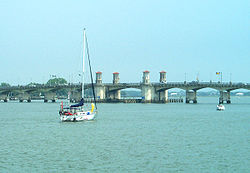 Matanzas River is a body of water located in St. Johns
St. Johns County, Florida
St. Johns County is a county located in northeastern Florida. As of the 2010 census, the population was 190,039. The county seat is St. Augustine. Due to the inclusion of Ponte Vedra Beach, it is one of the highest-income counties in the United States....
and Flagler
Flagler County, Florida
Flagler County was created in 1917 from portions of Saint Johns and Volusia counties. It was named for Henry Morrison Flagler, a famous railroad builder who built the Florida East Coast Railway. Bunnell is the county seat of Flagler County....
counties in Florida
Florida
Florida is a state in the southeastern United States, located on the nation's Atlantic and Gulf coasts. It is bordered to the west by the Gulf of Mexico, to the north by Alabama and Georgia and to the east by the Atlantic Ocean. With a population of 18,801,310 as measured by the 2010 census, it...
. It is a narrow saltwater bar-bounded estuary
Estuary
An estuary is a partly enclosed coastal body of water with one or more rivers or streams flowing into it, and with a free connection to the open sea....
sheltered from the Atlantic Ocean
Atlantic Ocean
The Atlantic Ocean is the second-largest of the world's oceanic divisions. With a total area of about , it covers approximately 20% of the Earth's surface and about 26% of its water surface area...
by Anastasia Island
Anastasia Island
Anastasia Island is a barrier island which is approximately long located off the northeast Atlantic coast of Florida in the United States. The island is located east and southeast of St. Augustine. It is separated from the mainland by the Matanzas River, part of the Intracoastal waterway, Matanzas...
.

The Matanzas River is 23 miles (37 km) in length and extends from St. Augustine
St. Augustine, Florida
St. Augustine is a city in the northeast section of Florida and the county seat of St. Johns County, Florida, United States. Founded in 1565 by Spanish explorer and admiral Pedro Menéndez de Avilés, it is the oldest continuously occupied European-established city and port in the continental United...
Inlet southward to approximately 6.5 miles (10.5 km) south of the Matanzas Inlet
Matanzas Inlet
Matanzas Inlet is a channel in Florida between barrier islands connecting the Atlantic Ocean and the south end of the Matanzas River. It is south of St. Augustine, in the southern part of St. Johns County, at coordinates...
on the southern tip of Anastasia Island. The river is part of the Intracoastal Waterway
Intracoastal Waterway
The Intracoastal Waterway is a 3,000-mile waterway along the Atlantic and Gulf coasts of the United States. Some lengths consist of natural inlets, salt-water rivers, bays, and sounds; others are artificial canals...
.

The Matanzas River was named by Spanish forces for a massacre, led by Pedro Menéndez de Avilés
Pedro Menéndez de Avilés
Pedro Menéndez de Avilés was a Spanish admiral and explorer, best remembered for founding St. Augustine, Florida in 1565. This was the first successful Spanish foothold in La Florida and remained the most significant city in the region for several hundred years. St...
of Spain, of a group of several hundred shipwrecked French
France
The French Republic , The French Republic , The French Republic , (commonly known as France , is a unitary semi-presidential republic in Western Europe with several overseas territories and islands located on other continents and in the Indian, Pacific, and Atlantic oceans. Metropolitan France...
Huguenot
Huguenot
The Huguenots were members of the Protestant Reformed Church of France during the 16th and 17th centuries. Since the 17th century, people who formerly would have been called Huguenots have instead simply been called French Protestants, a title suggested by their German co-religionists, the...
s from Fort Caroline
Fort Caroline
Fort Caroline was the first French colony in the present-day United States. Established in what is now Jacksonville, Florida, on June 22, 1564, under the leadership of René Goulaine de Laudonnière, it was intended as a refuge for the Huguenots. It lasted one year before being obliterated by the...
, led by Jean Ribault
Jean Ribault
Jean Ribault was a French naval officer, navigator, and a colonizer of what would become the southeastern United States. He was a major figure in the French attempts to colonize Florida...
. The Huguenots were executed somewhere near the present site of Matanzas Inlet in 1565. Menéndez had been ordered to kill all Protestants he found in the New World. "Matanzas" means "killings" or "slaughters" in Spanish
Spanish language
Spanish , also known as Castilian , is a Romance language in the Ibero-Romance group that evolved from several languages and dialects in central-northern Iberia around the 9th century and gradually spread with the expansion of the Kingdom of Castile into central and southern Iberia during the...
. Matanzas is thus the tenth oldest surviving European place-name in the U.S.
The source of this article is wikipedia, the free encyclopedia.  The text of this article is licensed under the GFDL.