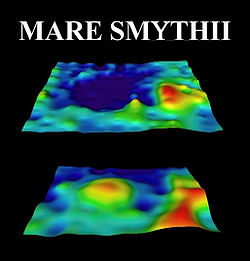 In astronomy or astrophysics mass concentration or mascon is a region of a planet or moon's crust that contains a large positive gravitational anomaly
Gravity anomaly
A gravity anomaly is the difference between the observed acceleration of Earth's gravity and a value predicted from a model.-Geodesy and geophysics:...
. In general, the word "mascon" can be used as a noun to describe an excess distribution of mass on or beneath the surface of a planet (with respect to some suitable average), such as Hawaii
Hawaii
Hawaii is the newest of the 50 U.S. states , and is the only U.S. state made up entirely of islands. It is the northernmost island group in Polynesia, occupying most of an archipelago in the central Pacific Ocean, southwest of the continental United States, southeast of Japan, and northeast of...
. However, this term is most often used to describe a geologic structure that has a positive gravitational anomaly associated with a feature (e.g. depressed basin) that might otherwise have been expected to have a negative anomaly, such as the "mascon basins" on the Moon
Moon
The Moon is Earth's only known natural satellite,There are a number of near-Earth asteroids including 3753 Cruithne that are co-orbital with Earth: their orbits bring them close to Earth for periods of time but then alter in the long term . These are quasi-satellites and not true moons. For more...
.

Type examples of mascon basins on the Moon are the Imbrium
Mare Imbrium
Mare Imbrium, Latin for "Sea of Showers" or "Sea of Rains", is a vast lunar mare filling a basin on Earth's Moon and one of the larger craters in the Solar System. Mare Imbrium was created when lava flooded the giant crater formed when a very large object hit the Moon long ago...
, Serenitatis
Mare Serenitatis
Mare Serenitatis is a lunar mare that sits just to the east of Mare Imbrium on the Moon.It is located within the Serenitatis basin, which is of the Nectarian epoch. The material surrounding the mare is of the Lower Imbrian epoch, while the mare material is of the Upper Imbrian epoch...
, Crisium
Mare Crisium
Mare Crisium is a lunar mare located in the Moon's Crisium basin, just northeast of Mare Tranquillitatis. This basin is of the Pre-Imbrian period, 4.55 to 3.85 billion years ago. This mare is in diameter, and 176,000 km2 in area. It has a very flat floor, with a ring of wrinkled ridges...
and Orientale
Mare Orientale
Mare Orientale is one of the most striking large scale lunar features, resembling a target ring bull's-eye. Located on the extreme western edge of the lunar nearside, this impact basin is difficult to see from an Earthbound perspective.Material from this basin was not sampled by the Apollo program...
impact basins, all of which possess prominent topographic lows and positive gravitational anomalies. Examples of mascon basins on Mars
Mars
Mars is the fourth planet from the Sun in the Solar System. The planet is named after the Roman god of war, Mars. It is often described as the "Red Planet", as the iron oxide prevalent on its surface gives it a reddish appearance...
include the Argyre
Argyre Planitia
Argyre Planitia is a plain located in the Argyre impact basin in the southern highlands of Mars. Its name comes from a map produced by Giovanni Schiaparelli in 1877; it refers to Argyre, a mythical island of silver in Greek mythology....
, Isidis
Isidis Planitia
Isidis Planitia is a plain located inside a giant impact basin on Mars, centered at . It is the third biggest impact structure on the planet after the Hellas and Argyre basins – it is about 1500 km in diameter...
, and Utopia
Utopia Planitia
Utopia Planitia is the largest recognized impact basin on Mars with an estimated diameter of 3300 km, and is the Martian region where the Viking 2 lander touched down and began exploring on September 3, 1976. It is located at the antipode of Argyre Planitia, centered at...
basins. Theoretical considerations imply that a topographic low in isostatic equilibrium
Isostasy
Isostasy is a term used in geology to refer to the state of gravitational equilibrium between the earth's lithosphere and asthenosphere such that the tectonic plates "float" at an elevation which depends on their thickness and density. This concept is invoked to explain how different topographic...
would exhibit a slight negative gravitational anomaly. Thus, the positive gravitational anomalies associated with these impact basins indicate that some form of positive density anomaly must exist within the crust or upper mantle that is currently supported by the lithosphere
Lithosphere
The lithosphere is the rigid outermost shell of a rocky planet. On Earth, it comprises the crust and the portion of the upper mantle that behaves elastically on time scales of thousands of years or greater.- Earth's lithosphere :...
. One possibility is that these anomalies are due to dense mare basaltic lavas
Lunar mare
The lunar maria are large, dark, basaltic plains on Earth's Moon, formed by ancient volcanic eruptions. They were dubbed maria, Latin for "seas", by early astronomers who mistook them for actual seas. They are less reflective than the "highlands" as a result of their iron-rich compositions, and...
, which might reach up to 6 kilometers in thickness for the Moon. However, while these lavas certainly contribute to the observed gravitational anomaly, uplift of the crust-mantle interface is also required to account for its magnitude. Indeed, some mascon basins on the Moon do not appear to be associated with any signs of volcanic activity. Theoretical considerations in either case indicate that all the lunar mascons are super-isostatic (that is, supported above their isostatic positions). The huge expanse of mare basaltic volcanism associated with Oceanus Procellarum
Oceanus Procellarum
Oceanus Procellarum is a vast lunar mare on the western edge of the near side of the Earth's Moon. Its name derives from the old superstition that its appearance during the second quarter heralded bad weather...
does not possess a positive gravitational anomaly. The lunar mascons alter the local gravity in certain regions sufficiently that low and uncorrected satellite orbit
Orbit
In physics, an orbit is the gravitationally curved path of an object around a point in space, for example the orbit of a planet around the center of a star system, such as the Solar System...
s around the Moon are unstable on a timescale of months or years. This acts to distort successive orbits, causing the satellite to ultimately impact the surface.

Luna-10 orbiter was the first artificial object to orbit the moon and it returned tracking data indicating that the lunar gravitational field caused larger than expected perturbations presumably due to 'roughness' of the lunar gravitational field.
The Lunar mascons were discovered by Paul M Muller and William L Sjogren of the NASA Jet Propulsion Laboratory
Jet Propulsion Laboratory
Jet Propulsion Laboratory is a federally funded research and development center and NASA field center located in the San Gabriel Valley area of Los Angeles County, California, United States. The facility is headquartered in the city of Pasadena on the border of La Cañada Flintridge and Pasadena...
(JPL) in 1968 from a new analytic method applied to the highly precise navigation data from the unmanned pre-Apollo Lunar Orbiter spacecraft. This discovery observed the consistent 1:1 correlation between very large positive gravity anomalies and depressed circular basins on the moon. This fact places key limits on models attempting to follow the history of the moon's geological development and explain the current lunar internal structures.

At that time, one of NASA's highest priority "tiger team" projects was to explain why the Lunar Orbiter spacecraft being used to test the accuracy of Project Apollo
Project Apollo
The Apollo program was the spaceflight effort carried out by the United States' National Aeronautics and Space Administration , that landed the first humans on Earth's Moon. Conceived during the Presidency of Dwight D. Eisenhower, Apollo began in earnest after President John F...
navigation were experiencing errors in predicted position of ten times the mission specification (2 kilometers instead of 200 meters). This meant that the predicted landing areas were 100 times as large as those being carefully defined for reasons of safety. Lunar orbital effects principally resulting from the strong gravitational perturbations of the MASCONS were ultimately revealed as the cause. William Wollenhaupt and Emil Schiesser of the NASA Manned Spacecraft Center in Houston then worked out the "fix" that was first applied to Apollo 12
Apollo 12
Apollo 12 was the sixth manned flight in the American Apollo program and the second to land on the Moon . It was launched on November 14, 1969 from the Kennedy Space Center, Florida, four months after Apollo 11. Mission commander Charles "Pete" Conrad and Lunar Module Pilot Alan L...
and permitted its landing within 163 meters of the target, the previously-landed Surveyor 3
Surveyor 3
Surveyor 3 was the third lander of the American unmanned Surveyor program sent to explore the surface of the Moon. Launched on April 17, 1967, Surveyor 3 landed on April 20, 1967 at the Mare Cognitum portion of the Oceanus Procellarum...
spacecraft.
The source of this article is wikipedia, the free encyclopedia.  The text of this article is licensed under the GFDL.