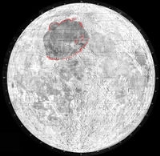 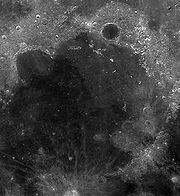 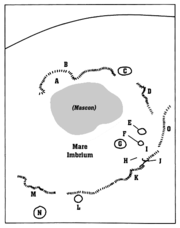 With a diameter of 1146 km it is second only to Oceanus Procellarum
Oceanus Procellarum
Oceanus Procellarum is a vast lunar mare on the western edge of the near side of the Earth's Moon. Its name derives from the old superstition that its appearance during the second quarter heralded bad weather...
in size among the maria, and it is the largest mare associated with an impact basin. Apollo 15
Apollo 15
Apollo 15 was the ninth manned mission in the American Apollo space program, the fourth to land on the Moon and the eighth successful manned mission. It was the first of what were termed "J missions", long duration stays on the Moon with a greater focus on science than had been possible on previous...
landed in the southeastern region of Mare Imbrium, near the Apennine Mountains
Montes Apenninus
Montes Apenninus are a rugged mountain range on the northern part of the Moon's near side. They are named after the Apennine Mountains in Italy....
.

The Imbrium Basin is surrounded by three concentric rings of mountains, uplifted by the colossal impact event that excavated it. The outermost ring of mountains has a diameter of 1300 km and is divided into several different ranges; the Montes Carpatus
Montes Carpatus
Montes Carpatus is a mountain range that forms the southern edge of the Mare Imbrium on the Moon. The selenographic coordinates of this range are 14.5° N, 24.4° W, and the formation has an overall diameter of . They were named after the Carpathian Mountains in Central Europe.This rugged range...
to the south, the Montes Apenninus
Montes Apenninus
Montes Apenninus are a rugged mountain range on the northern part of the Moon's near side. They are named after the Apennine Mountains in Italy....
to the southeast, and the Montes Caucasus
Montes Caucasus
Montes Caucasus is a rugged range of mountains in the northeastern part of the Moon. It begins at a gap of level surface that joins the Mare Imbrium to the west with the Mare Serenitatis to the east, and extends in an irregular band to the north-northeast to the western side of the prominent crater...
to the east. The ring mountains are not as well developed to the north and west, and it appears they were simply not raised as high in these regions by the Imbrium impact. The middle ring of mountains forms the Montes Alpes
Montes Alpes
Montes Alpes is a mountain range in the northern part of the Moon's near side. It was named after the Alps in Europe.This range forms the northeastern border of the Mare Imbrium lunar mare. To the west of the range is the level and nearly featureless mare, while on the eastern face is a more rugged...
and the mountainous regions near the crater
Impact crater
In the broadest sense, the term impact crater can be applied to any depression, natural or manmade, resulting from the high velocity impact of a projectile with a larger body...
s Archimedes
Archimedes (crater)
Archimedes is a large lunar impact crater on the eastern edges of the Mare Imbrium. To the south of the crater extends the Montes Archimedes mountainous region. On the southeastern rim is the Palus Putredinis flooded plain, containing a system of rilles named the Rimae Archimedes that extend over...
and Plato
Plato (crater)
Plato is the lava-filled remains of a lunar impact crater on the moon. It is located on the northeastern shore of the Mare Imbrium, at the western extremity of the Montes Alpes mountain range. In the mare to the south are several rises collectively named the Montes Teneriffe. To the north lies the...
. The innermost ring, with a diameter of 600 km, has been largely buried under the mare's basalt leaving only low hills protruding through the mare plains and mare ridges forming a roughly circular pattern.

The outer ring of mountains rise roughly 7 km above the surface of Mare Imbrium. The mare material is thought to be about 5 km deep, giving the Imbrium Basin a total depth of 12 km; it is thought that the original crater left by the Imbrium impact was as much as 100 km deep, but the floor of the basin bounced back upwards immediately afterwards.

Surrounding the Imbrium Basin is a region blanketed by ejecta from the impact, extending roughly 800 km outward. Also encircling the Imbrium basin is a pattern of radial grooves called the Imbrium Sculpture, which have been interpreted as furrows cut in the Moon's surface by large projectiles blasted out of the basin at low angles, causing them to skim across the lunar surface ploughing out these features. Furthermore, a Moon-wide pattern of faults which run both radial to and concentric to the Imbrium basin were thought to have been formed by the Imbrium impact; the event literally shattered the Moon's entire lithosphere
Lithosphere
The lithosphere is the rigid outermost shell of a rocky planet. On Earth, it comprises the crust and the portion of the upper mantle that behaves elastically on time scales of thousands of years or greater.- Earth's lithosphere :...
. At the region of the Moon's surface exactly opposite Imbrium Basin there is a region of chaotic terrain (the crater Van de Graaff
Van de Graaff (crater)
Van de Graaff is an unusual lunar formation that has the appearance of two merged craters, approximately in a figure-8 shape with no intervening rim separating the two halves. The crater is located on the far side of the Moon, on the northeast edge of Mare Ingenii. The crater Birkeland is attached...
) which is thought to have been formed when the seismic waves of the impact were focused there after travelling through the Moon's interior. Mare Imbrium is about 750 miles (1,207 km) long.
The source of this article is wikipedia, the free encyclopedia.  The text of this article is licensed under the GFDL.