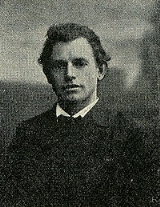 Encyclopedia
Martin Andersen Nexø was a Danish
Denmark
Denmark is a Scandinavian country in Northern Europe. The countries of Denmark and Greenland, as well as the Faroe Islands, constitute the Kingdom of Denmark . It is the southernmost of the Nordic countries, southwest of Sweden and south of Norway, and bordered to the south by Germany. Denmark...
writer
Writer
A writer is a person who produces literature, such as novels, short stories, plays, screenplays, poetry, or other literary art. Skilled writers are able to use language to portray ideas and images....
. He was the first significant Danish author to depict the working class
Working class
Working class is a term used in the social sciences and in ordinary conversation to describe those employed in lower tier jobs , often extending to those in unemployment or otherwise possessing below-average incomes...
in his writings, and the first great Danish socialist
Socialism
Socialism is an economic system characterized by social ownership of the means of production and cooperative management of the economy; or a political philosophy advocating such a system. "Social ownership" may refer to any one of, or a combination of, the following: cooperative enterprises,...
, later communist
Communism
Communism is a social, political and economic ideology that aims at the establishment of a classless, moneyless, revolutionary and stateless socialist society structured upon common ownership of the means of production...
, writer.

Martin Andersen Nexø was born to a large family (the fourth of eleven children) in Christianshavn
Christianshavn
Christianshavn is an artificial island neighbourhood located in Copenhagen, Denmark. It was founded in the early 17th century by Christian IV as part of his extension of the fortifications of Copenhagen. Originally it was laid out as an independent privileged merchant's town with inspiration from...
an impoverished district of Copenhagen
Copenhagen
Copenhagen is the capital and largest city of Denmark, with an urban population of 1,199,224 and a metropolitan population of 1,930,260 . With the completion of the transnational Øresund Bridge in 2000, Copenhagen has become the centre of the increasingly integrating Øresund Region...
. In 1877, his family moved to Nexø
Nexø
Nexø is a town on the eastern coast of the Baltic island of Bornholm, Denmark. With a population of 3,762 , it is the second largest town, as well as the largest fishing port on the island. Fishing is the mainstay of the town economy. Nexø is also the site of a distillery and a mustard factory...
, and he adopted the name of this town as his last name. Having been an industrial worker before, Nexø he attended a folk high school and later worked as a journalist
Journalist
A journalist collects and distributes news and other information. A journalist's work is referred to as journalism.A reporter is a type of journalist who researchs, writes, and reports on information to be presented in mass media, including print media , electronic media , and digital media A...
. He spent the mid-1890s travelling in Southern Europe
Southern Europe
The term Southern Europe, at its most general definition, is used to mean "all countries in the south of Europe". However, the concept, at different times, has had different meanings, providing additional political, linguistic and cultural context to the definition in addition to the typical...
, and his book Soldage (1903) (English: Days in the Sun) is largely based on those travels. Like many of his literary contemporaries, including Johannes Vilhelm Jensen
Johannes Vilhelm Jensen
*Not to be confused with German author Wilhelm Jensen .Johannes Vilhelm Jensen, in Denmark always called Johannes V. Jensen, was a Danish author, often considered the first great Danish writer of the 20th century. He was awarded the Nobel Prize in Literature in 1944...
, Nexø was at first heavily influenced by fin-de-siécle
Fin de siècle
Fin de siècle is French for "end of the century". The term sometimes encompasses both the closing and onset of an era, as it was felt to be a period of degeneration, but at the same time a period of hope for a new beginning...
pessimism, but gradually turned to a more extroverted view, joining the Social Democratic
Social democracy
Social democracy is a political ideology of the center-left on the political spectrum. Social democracy is officially a form of evolutionary reformist socialism. It supports class collaboration as the course to achieve socialism...
movement and later the Communist Party of Denmark
Communist Party of Denmark
Communist Party of Denmark is a communist political party in Denmark which was founded as Venstresocialistiske Parti in 1919. VSP was a split from the Danish Social Democratic Party. The party assumed its present name in 1920...
; his later books reflect his political support of the Soviet Union
Soviet Union
The Soviet Union , officially the Union of Soviet Socialist Republics , was a constitutionally socialist state that existed in Eurasia between 1922 and 1991....
.

Pelle Erobreren (English: Pelle the Conqueror), published in four volumes 1906-1910, is his best-known work and the one most translated. Its first section was made the subject of the DDR-FS
Deutscher Fernsehfunk
Deutscher Fernsehfunk , known from 1972 to 1990 as Fernsehen der DDR , was the state television broadcaster in East Germany.-Foundation:...
movie Pelle der Eroberer in 1986 and the movie Pelle Erobreren
Pelle the Conqueror
Pelle the Conqueror is a 1987 Danish film by Bille August that tells the story of two Swedish immigrants to Denmark, a father and son, who try to build a new life for themselves...
in 1987. Ditte Menneskebarn (English: Ditte, Child of Man), written from 1917 to 1921, praises the working woman for her self-sacrifice, and a Danish film version of the first part of the book was released in 1946 as Ditte, Child of Man
Ditte, Child of Man
Ditte, Child of Man, , is a 1946 socio-realistic Danish drama directed by Bjarne Henning-Jensen based on the novel by Martin Andersen Nexø. The film stars Tove Maës in the tragic story of an impoverished young girl who becomes the victim of harsh social conditions. The film has been noted as the...
. The much debated Midt i en Jærntid (i.e. "In an Iron Age", English: In God's Land), written in 1929, satirises the Danish farmers of World War I
World War I
World War I , which was predominantly called the World War or the Great War from its occurrence until 1939, and the First World War or World War I thereafter, was a major war centred in Europe that began on 28 July 1914 and lasted until 11 November 1918...
. During his latter years, 1944 to 1956, Nexø wrote but did not complete a trilogy consisting of the books Morten hin Røde (English: Morten the Red), Den fortabte generation (English: The Lost Generation), and Jeanette. This was ostensibly a continuation of Pelle the Conqueror, but also a masked autobiography
Autobiography
An autobiography is a book about the life of a person, written by that person.-Origin of the term:...
.

Danish police arrested Nexø in 1941 during Denmark's occupation by the Nazis
Nazism
Nazism, the common short form name of National Socialism was the ideology and practice of the Nazi Party and of Nazi Germany...
, for his communist affiliation. Upon his release, he traveled to neutral Sweden
Sweden
Sweden , officially the Kingdom of Sweden , is a Nordic country on the Scandinavian Peninsula in Northern Europe. Sweden borders with Norway and Finland and is connected to Denmark by a bridge-tunnel across the Öresund....
and then to the Soviet Union, where he made broadcasts to Nazi-occupied Denmark and Norway
Norway
Norway , officially the Kingdom of Norway, is a Nordic unitary constitutional monarchy whose territory comprises the western portion of the Scandinavian Peninsula, Jan Mayen, and the Arctic archipelago of Svalbard and Bouvet Island. Norway has a total area of and a population of about 4.9 million...
. After World War II
World War II
World War II, or the Second World War , was a global conflict lasting from 1939 to 1945, involving most of the world's nations—including all of the great powers—eventually forming two opposing military alliances: the Allies and the Axis...
, Nexø moved to Dresden
Dresden
Dresden is the capital city of the Free State of Saxony in Germany. It is situated in a valley on the River Elbe, near the Czech border. The Dresden conurbation is part of the Saxon Triangle metropolitan area....
in East Germany, where he was made an honorary citizen. The Martin-Andersen-Nexø-Gymnasium
Martin-Andersen-Nexø-Gymnasium Dresden
The Martin-Andersen-Nexö-Gymnasium Dresden is a selective high school in Dresden, Germany, with a special focus on mathematics and sciences. It is originated from the former school for radio mechanics in the GDR...
high school
High school
High school is a term used in parts of the English speaking world to describe institutions which provide all or part of secondary education. The term is often incorporated into the name of such institutions....
in Dresden was named after him. His international reputation as one the greatest European social writers
Socialist realism
Socialist realism is a style of realistic art which was developed in the Soviet Union and became a dominant style in other communist countries. Socialist realism is a teleologically-oriented style having its purpose the furtherance of the goals of socialism and communism...
grew, especially, but not exclusively, in socialist
Socialism
Socialism is an economic system characterized by social ownership of the means of production and cooperative management of the economy; or a political philosophy advocating such a system. "Social ownership" may refer to any one of, or a combination of, the following: cooperative enterprises,...
countries.

Nexø died in Dresden in 1954 and was interred in the Assistens Kirkegård in the Nørrebro
Nørrebro
Nørrebro is one of the 10 official districts of Copenhagen, Denmark. It is northwest of the city centre, beyond the location of the old Northern Gate , which, until dismantled in 1856, was near the current Nørreport station.-Geography:...
neighbourhood of Copenhagen. A minor planet
Minor planet
An asteroid group or minor-planet group is a population of minor planets that have a share broadly similar orbits. Members are generally unrelated to each other, unlike in an asteroid family, which often results from the break-up of a single asteroid...
, 3535 Ditte
3535 Ditte
3535 Ditte is a main-belt asteroid discovered on September 24, 1979 by Chernykh, N. at Nauchnyj.- External links :*...
, discovered by Soviet astronomer Nikolai Stepanovich Chernykh
Nikolai Stepanovich Chernykh
Nikolay Stepanovich Chernykh was a Soviet and Russian astronomer.Chernykh was born in the city of Usman' in Voronezh Oblast...
in 1979, is named after the main character in his novel Ditte, Child of Man.