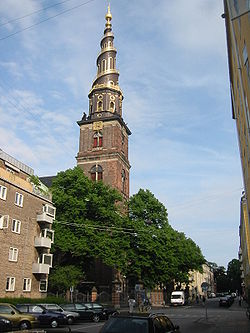 Christianshavn is an artificial island
Artificial island
An artificial island or man-made island is an island or archipelago that has been constructed by people rather than formed by natural means...
neighbourhood located in Copenhagen
Copenhagen
Copenhagen is the capital and largest city of Denmark, with an urban population of 1,199,224 and a metropolitan population of 1,930,260 . With the completion of the transnational Øresund Bridge in 2000, Copenhagen has become the centre of the increasingly integrating Øresund Region...
, Denmark
Denmark
Denmark is a Scandinavian country in Northern Europe. The countries of Denmark and Greenland, as well as the Faroe Islands, constitute the Kingdom of Denmark . It is the southernmost of the Nordic countries, southwest of Sweden and south of Norway, and bordered to the south by Germany. Denmark...
. It was founded in the early 17th century by Christian IV
Christian IV of Denmark
Christian IV was the king of Denmark-Norway from 1588 until his death. With a reign of more than 59 years, he is the longest-reigning monarch of Denmark, and he is frequently remembered as one of the most popular, ambitious and proactive Danish kings, having initiated many reforms and projects...
as part of his extension of the fortifications of Copenhagen
Fortifications of Copenhagen (17th century)
The fortifications of Copenhagen underwent a comprehensive modernization and expansion in the 17th century. The project was commenced and largely masterplanned by Christian IV in the early 17th century but continued and completed by his successors...
. Originally it was laid out as an independent privileged merchant's town with inspiration from Dutch
Netherlands
The Netherlands is a constituent country of the Kingdom of the Netherlands, located mainly in North-West Europe and with several islands in the Caribbean. Mainland Netherlands borders the North Sea to the north and west, Belgium to the south, and Germany to the east, and shares maritime borders...
cities but it was soon incorporated into Copenhagen proper. Dominated by canals, it is the part of Copenhagen with the most nautical atmosphere.

For much of the 20th century a working-class neighbourhood, Christianshavn developed a bohemian reputation in the 1970s and it is now a fashionable, diverse and lively part of the city with its own distinctive personality, with residents tending to see themselves first as Christianshavners and then as Copenhageners. Businessmen, students, artists, hippies and traditional families with children live side-by-side.

Administratively, Christianshavn has been part of Indre By District
Indre By
Indre By , also known as Copenhagen Center or K or Downtown Copenhagen or City, is one of the 15 administrative, statistical, and tax city districts comprising the municipality of Copenhagen, Denmark...
since 2007 but it still has its own local council.

Christianshavn covers an area of 3.43 km², and includes three minor islands to the north, jointly referred to as Holmen
Holmen, Copenhagen
Holmen is an area in central Copenhagen, Denmark. In spite of its name, deceptively in singular, Holmen is a congregation of small islands, forming a north-eastern extension of Christianshavn between Zealand and the northern tip of Amager....
. It has a population of 10,140 and a population density of 2,960 per km².

To the south and east Christianshavn is defined by its old ramparts and separated from the island of Amager
Amager
Amager is a Danish island in the Øresund. The Danish capital, Copenhagen, is partly situated on Amager, which is connected to the much larger island of Zealand by five bridges.-History:...
by a narrow body of water known as Stadsgraven
Stadsgraven
Stadsgraven is the canal which separates Christianshavn from the rest of Amager in Copenhagen, Denmark. It was originally a moat located in front of the Christianshavn Rampart as part of the city's Bastioned Ring Fortifications....
. To the west Christianshavn borders on the Inner Harbour that separates it from Slotsholmen
Slotsholmen
Slotsholmen is an island in the harbour of Copenhagen, Denmark, and part of Copenhagen Inner City. Bishop Absalon constructed the city's first castle on the island in 1166-67 at the site where Christiansborg Palace, the seat of the Danish Parliament lies today...
and the rest of Copenhagen's city centre
Indre By
Indre By , also known as Copenhagen Center or K or Downtown Copenhagen or City, is one of the 15 administrative, statistical, and tax city districts comprising the municipality of Copenhagen, Denmark...
. 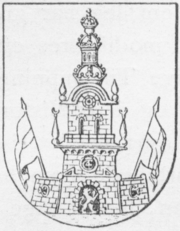 In 1612, Christian IV initiated an ambitious programme to fortify Copenhagen. During the period 1618-1623, he erected earthen embarkments with five bastion
Bastion
A bastion, or a bulwark, is a structure projecting outward from the main enclosure of a fortification, situated in both corners of a straight wall , facilitating active defence against assaulting troops...
s
in the marshy area between Copenhagen and the island of Amager
Amager
Amager is a Danish island in the Øresund. The Danish capital, Copenhagen, is partly situated on Amager, which is connected to the much larger island of Zealand by five bridges.-History:...
. At the same time the idea was hatched of creating a new merchant town in the area. In 1639 the little merchant and fortress town of Christianshavn was established. However, competition from Copenhagen soon proved too strong for the little town, and by 1674 it was incorporated into its larger neighbour.

The Lower City Side of Christianshavn, also known as Christiansbro, is the most affluent part of the neighbourhood, with several modern residential developments built on the grounds of the former B&W Shipyard. Several headquarters are also found in the area, including most notably the Danish headquarters of Nordea
Nordea
Nordea Bank AB is a Stockholm-based financial services group operating in Northern Europe. The bank is the result of the successive mergers and acquisitions of the Swedish, Finnish, Danish and Norwegian banks of Nordbanken, Merita Bank, Unibank and Kreditkassen that took place between 1997 and 2000...
along its entire harbourfront, while its most important historic building is Christian's Church
Christian's Church, Copenhagen
Christian's Church is a magnificent Rococo church in the Christianshavn district of Copenhagen, Denmark. Designed by Nicolai Eigtved, it was built 1754–59....
. On the other—Rampar Sidet—side of the canal, the area is dominated by historic residential buildings and institutions.
Christianshavn's Upper City Side, stretching along Strandgade from Torvegade to the Trangaven Canal, is dominated by old renovated warehousess and merchant's houses.A number of large institutions are located in the area, including the Ministry of Foreign Affairs. Cultural institutions include Danish Architecture Centre
Danish Architecture Centre
Danish Architecture Centre , DAC, is a communication and development centre for architecture in Copenhagen, Denmark...
and the North Atlantic House
North Atlantic House
North Atlantic House is a cultural centre located on the harbour front in Copenhagen, Denmark, dedicated to preserve, promote and communicate culture and art from the North Atlantic area. It is made as a cooperation between Denmark, Iceland, Greenland and the Faroe Islands and includes three...
. On the other side of the canal, Christianshavn's Upper Rampart Side is the densest and most neglected part of the neighbourhood with around half of Christianshavn's 10,000 inhabitants living in that area. It is in this area that the Church of Our Saviour and Christiania are found.

Holmen is characterized by a mixture of old military buildings and new residential developments and is the home of many creative business
Creative class
The Creative Class is a socioeconomic class that economist and social scientist Richard Florida, a professor and head of the Martin Prosperity Institute at the Rotman School of Management at the University of Toronto, identifies as a key driving force for economic development of post-industrial...
ike advertising agencies
Advertising agency
An advertising agency or ad agency is a service business dedicated to creating, planning and handling advertising for its clients. An ad agency is independent from the client and provides an outside point of view to the effort of selling the client's products or services...
and architectural practices
Architect
An architect is a person trained in the planning, design and oversight of the construction of buildings. To practice architecture means to offer or render services in connection with the design and construction of a building, or group of buildings and the space within the site surrounding the...
as well as creative educational institutions like Royal Danish Academy of Fine Arts and the Danish Film School.

The Church of Our Saviour in Christianshavn appears in a chapter of Jules Verne
Jules Verne
Jules Gabriel Verne was a French author who pioneered the science fiction genre. He is best known for his novels Twenty Thousand Leagues Under the Sea , A Journey to the Center of the Earth , and Around the World in Eighty Days...
's A Journey to the Center of the Earth. The character Axel is made climb the winding spire for five consecutive days by his uncle to cure him of his Acrophobia
Acrophobia
Acrophobia is an extreme or irrational fear of heights. It belongs to a category of specific phobias, called space and motion discomfort that share both similar etiology and options for treatment.Most people experience a degree of natural fear when exposed to heights, especially if there is little...
before their descent into the volcano
Volcano
2. Bedrock3. Conduit 4. Base5. Sill6. Dike7. Layers of ash emitted by the volcano8. Flank| 9. Layers of lava emitted by the volcano10. Throat11. Parasitic cone12. Lava flow13. Vent14. Crater15...
.

The action of Peter Høeg
Peter Høeg
Peter Høeg is a Danish writer of fiction. He received a Master of Arts in Literature from the University of Copenhagen in 1984.-Early life:Høeg was born in Copenhagen, Denmark...
's novel Miss Smilla's Feeling for Snow sets off in the public housing projects
Public housing
Public housing is a form of housing tenure in which the property is owned by a government authority, which may be central or local. Social housing is an umbrella term referring to rental housing which may be owned and managed by the state, by non-profit organizations, or by a combination of the...
'Det Hvide Snit' (English: The White Cut, popular Danish for leukotomy
Lobotomy
Lobotomy "; τομή – tomē: "cut/slice") is a neurosurgical procedure, a form of psychosurgery, also known as a leukotomy or leucotomy . It consists of cutting the connections to and from the prefrontal cortex, the anterior part of the frontal lobes of the brain...
) in Christianshavn.

Christianshavns Kanal, named for the canal, is the last track on Danish band Gasolin'
Gasolin'
Gasolin was a Danish rock band from Christianshavn in Copenhagen formed by Kim Larsen, Franz Beckerlee and Wili Jønsson in 1969. Their first drummer was the late Bjørn Uglebjerg. He was replaced by Søren Berlev in 1971...
s 1973 debut album Værsgo
Værsgo
Værsgo is the debut album of Kim Larsen who formed Gasolin' in 1969 with Wili Jønsson and Franz Beckerlee. It was released in 1973 while he was still a member of Gasolin', and the album contains songs which were not found suitable for Gasolin'. With 17 songs, it was apparent that Kim Larsen had a...
.