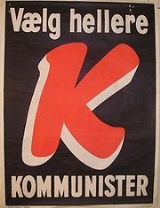 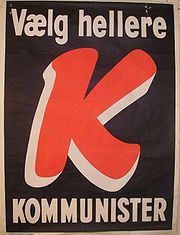 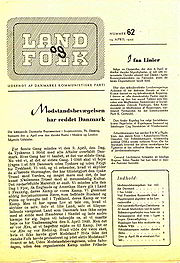 Communist Party of Denmark is a communist political party
Political party
A political party is a political organization that typically seeks to influence government policy, usually by nominating their own candidates and trying to seat them in political office. Parties participate in electoral campaigns, educational outreach or protest actions...
in Denmark
Denmark
Denmark is a Scandinavian country in Northern Europe. The countries of Denmark and Greenland, as well as the Faroe Islands, constitute the Kingdom of Denmark . It is the southernmost of the Nordic countries, southwest of Sweden and south of Norway, and bordered to the south by Germany. Denmark...
which was founded as Venstresocialistiske Parti (Left Socialist Party) in 1919. VSP was a split from the Danish Social Democratic Party
Social Democrats (Denmark)
The Social Democrats , is a Danish political party committed to the political ideology of social democracy. It is the major coalition partner in Denmark's government since the 2011 parliamentary election, and party leader Helle Thorning-Schmidt is the current Prime Minister of Denmark...
. The party assumed its present name in 1920. In 2010 DKP is represented in the Danish parliament through the Unity List or Red-Green Alliance
Red-Green Alliance (Denmark)
The Red-Green Alliance is a socialist political party in Denmark.- History :The party was formed in 1989 as an electoral alliance by three left-wing parties, Left Socialists , Communist Party of Denmark and Socialist Workers Party...
.

The party's chairmen were:

After 1991 the party had collective leadership until 2003 when Henrik Stamer Hedin assumed chairmanship.

In 1941, during the German occupation of Denmark
Occupation of Denmark
Nazi Germany's occupation of Denmark began with Operation Weserübung on 9 April 1940, and lasted until German forces withdrew at the end of World War II following their surrender to the Allies on 5 May 1945. Contrary to the situation in other countries under German occupation, most Danish...
in World War II
World War II
World War II, or the Second World War , was a global conflict lasting from 1939 to 1945, involving most of the world's nations—including all of the great powers—eventually forming two opposing military alliances: the Allies and the Axis...
, DKP was banned and its members arrested. After this DKP played a leading role in organizing the resistance through KOPA, later renamed BOPA
BOPA
BOPA was a group of the Danish resistance movement operating at the time of the occupation of Denmark by Nazi Germany during the Second World War....
. At the beginning of the war the party head quarter was located in Griffenfeldsgade
Griffenfeldsgade
Griffenfeldsgade is a side street to Nørrebrogade in Inner Nørrebro in Copenhagen. The street has a multiethnic character, and houses a number of African specialty stores, coffee shops and restaurants....
in Nørrebro
Nørrebro
Nørrebro is one of the 10 official districts of Copenhagen, Denmark. It is northwest of the city centre, beyond the location of the old Northern Gate , which, until dismantled in 1856, was near the current Nørreport station.-Geography:...
, the party cafe remains in the street today. From 1945 to 1990 DKP had a daily publication, Land og Folk. Until 1990, DKP had a youth wing, Danmarks Kommunistiske Ungdom.

In the mid 1960s the U.S. State Department estimated the party membership to be approximately 5000.