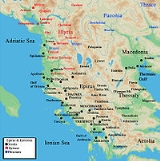 Overview
Pyrrhus or Pyrrhos was a Greek
Greeks
The Greeks, also known as the Hellenes , are a nation and ethnic group native to Greece, Cyprus and neighboring regions. They also form a significant diaspora, with Greek communities established around the world....
general
General
A general officer is an officer of high military rank, usually in the army, and in some nations, the air force. The term is widely used by many nations of the world, and when a country uses a different term, there is an equivalent title given....
and statesman
Statesman
A statesman is usually a politician or other notable public figure who has had a long and respected career in politics or government at the national and international level. As a term of respect, it is usually left to supporters or commentators to use the term...
of the Hellenistic era
Hellenistic civilization
Hellenistic civilization represents the zenith of Greek influence in the ancient world from 323 BCE to about 146 BCE...
. He was king of the Greek tribe of Molossians
Molossians
The Molossians were an ancient Greek tribe that inhabited the region of Epirus since the Mycenaean era. On their northeast frontier they had the Chaonians and to their southern frontier the kingdom of the Thesprotians, to their north were the Illyrians. The Molossians were part of the League of...
, of the royal Aeacid house (from circa 297 BC), and later he became king
King
- Centers of population :* King, Ontario, CanadaIn USA:* King, Indiana* King, North Carolina* King, Lincoln County, Wisconsin* King, Waupaca County, Wisconsin* King County, Washington- Moving-image works :Television:...
of Epirus
Epirus (ancient state)
Epirus was an ancient Greek state, located in the geographical region of Epirus, in the western Balkans. The homeland of the ancient Epirotes was bordered by the Aetolian League to the south, Thessalia and Macedonia to the east and Illyrian tribes to the north...
(r.
Reign
A reign is the term used to describe the period of a person's or dynasty's occupation of the office of monarch of a nation or of a people . In most hereditary monarchies and some elective monarchies A reign is the term used to describe the period of a person's or dynasty's occupation of the office...
306–302, 297–272 BC) and Macedon
Macedon
Macedonia or Macedon was an ancient kingdom, centered in the northeastern part of the Greek peninsula, bordered by Epirus to the west, Paeonia to the north, the region of Thrace to the east and Thessaly to the south....
(r. 288–284, 273–272 BC). He was one of the strongest opponents of early Rome
Roman Republic
The Roman Republic was the period of the ancient Roman civilization where the government operated as a republic. It began with the overthrow of the Roman monarchy, traditionally dated around 508 BC, and its replacement by a government headed by two consuls, elected annually by the citizens and...
. Some of his battles, though successful, cost him heavy losses, from which the term "Pyrrhic victory
Pyrrhic victory
A Pyrrhic victory is a victory with such a devastating cost to the victor that it carries the implication that another such victory will ultimately cause defeat.-Origin:...
" was coined. He is the subject of one of Plutarch
Plutarch
Plutarch then named, on his becoming a Roman citizen, Lucius Mestrius Plutarchus , c. 46 – 120 AD, was a Greek historian, biographer, essayist, and Middle Platonist known primarily for his Parallel Lives and Moralia...
's Parallel Lives
Parallel Lives
Plutarch's Lives of the Noble Greeks and Romans, commonly called Parallel Lives or Plutarch's Lives, is a series of biographies of famous men, arranged in tandem to illuminate their common moral virtues or failings, written in the late 1st century...
(Greek: Βίοι Παράλληλοι).
Pyrrhus was the son of Aeacides
Aeacides of Epirus
Aeacides , king of Epirus , was son of Arymbas and grandson of Alcetas I. He succeeded to the throne of Epirus on the death of his cousin Alexander, who was slain in Italy. Aeacides married Phthia, the daughter of Menon of Pharsalus, by whom he had the celebrated Pyrrhus and two daughters, Deidamia...
and Phthia
Phthia of Epirus
Phthia was a daughter of Menon of Pharsalus, the Thessalian hipparch, and wife of Aeacides, king of Epirus, by whom she became the mother of the celebrated Pyrrhus, as well as of two daughters: Deidamia, the wife of Demetrius Poliorcetes, and Troias, of whom nothing more is known...
, a Thessalian woman, and a second cousin of Alexander the Great (via Alexander's mother, Olympias
Olympias
Olympias was a Greek princess of Epirus, daughter of king Neoptolemus I of Epirus, the fourth wife of the king of Macedonia, Philip II, and mother of Alexander the Great...
).