In organic chemistry
Organic chemistry
Organic chemistry is a subdiscipline within chemistry involving the scientific study of the structure, properties, composition, reactions, and preparation of carbon-based compounds, hydrocarbons, and their derivatives...
, Markovnikov's rule or Markownikoff's rule is an observation
Observation
Observation is either an activity of a living being, such as a human, consisting of receiving knowledge of the outside world through the senses, or the recording of data using scientific instruments. The term may also refer to any data collected during this activity...
based on Zaitsev's rule
Zaitsev's rule
In chemistry, Zaitsev's rule, Saytzeff's rule or Saytsev's rule named after Alexander Mikhailovich Zaitsev is a rule that states that if more than one alkene can be formed during dehalogenation by an elimination reaction, the more stable alkene is the major product...
. It was formulated by the Russian chemist Vladimir Vasilevich Markovnikov
Vladimir Vasilevich Markovnikov
Vladimir Vasilyevich Markovnikov , also spelled as Markownikoff was a Russian chemist.-Life:...
in 1870.

The rule states that, with the addition of a protic acid HX to an alkene
Alkene
In organic chemistry, an alkene, olefin, or olefine is an unsaturated chemical compound containing at least one carbon-to-carbon double bond...
, the acid hydrogen (H) becomes attached to the carbon with fewer alkyl substituent
Substituent
In organic chemistry and biochemistry, a substituent is an atom or group of atoms substituted in place of a hydrogen atom on the parent chain of a hydrocarbon...
s, and the halide
Halide
A halide is a binary compound, of which one part is a halogen atom and the other part is an element or radical that is less electronegative than the halogen, to make a fluoride, chloride, bromide, iodide, or astatide compound. Many salts are halides...
(X) group becomes attached to the carbon with more alkyl substituents.

The chemical basis for Markovnikov's Rule is the formation of the most stable carbocation
Carbocation
A carbocation is an ion with a positively-charged carbon atom. The charged carbon atom in a carbocation is a "sextet", i.e. it has only six electrons in its outer valence shell instead of the eight valence electrons that ensures maximum stability . Therefore carbocations are often reactive,...
during the addition process. The addition of the hydrogen (in the form of a proton) to one carbon atom in the alkene creates a positive charge on the other carbon, forming a carbocation intermediate. The more substituted the carbocation (the more bonds it has to carbon or to electron-donating substituents) the more stable it is, due to induction and hyperconjugation
Hyperconjugation
In organic chemistry, hyperconjugation is the interaction of the electrons in a sigma bond with an adjacent empty non-bonding p-orbital or antibonding π orbital or filled π orbital, to give an extended molecular orbital that increases the stability of the system...
. The major product of the addition reaction will be the one formed from the more stable intermediate. Therefore, the major product of the addition of HX (where X is some atom more electronegative than H) to an alkene has the hydrogen atom in the less substituted position and X in the more substituted position. However, the other less substituted, less stable carbocation will still be formed to some degree, and will proceed to form the minor product with the opposite attachment of X.

The rule may be summarized as "the rich get richer (Jumi Shin)": A carbon rich in substituents will gain more substituents and the carbon with more hydrogens attached will get the hydrogen in many organic
Organic compound
An organic compound is any member of a large class of gaseous, liquid, or solid chemical compounds whose molecules contain carbon. For historical reasons discussed below, a few types of carbon-containing compounds such as carbides, carbonates, simple oxides of carbon, and cyanides, as well as the...
addition reaction
Addition reaction
An addition reaction, in organic chemistry, is in its simplest terms an organic reaction where two or more molecules combine to form a larger one....
s.

Mechanisms that avoid the carbocation
Carbocation
A carbocation is an ion with a positively-charged carbon atom. The charged carbon atom in a carbocation is a "sextet", i.e. it has only six electrons in its outer valence shell instead of the eight valence electrons that ensures maximum stability . Therefore carbocations are often reactive,...
intermediate may react through other mechanisms that are regioselective, against what Markovnikov's rule predicts, such as free radical addition
Free radical addition
Free radical addition is an addition reaction in organic chemistry involving free radicals. The addition may occur between a radical and a non-radical, or between two radicals....
. Such reactions are said to be anti-Markovnikov, since the halogen adds to the less substituted carbon, exactly the opposite of Markovnikov reaction. Again, like the positive charge, the radical is most stable when in the more substituted position.

Anti-Markovnikov behaviour extends to other chemical reactions than just additions to alkenes. One anti-Markovnikov manifestation is observed in hydration
Hydration reaction
In organic chemistry, a hydration reaction is a chemical reaction in which a hydroxyl group and a hydrogen cation are added to the two carbon atoms bonded together in the carbon-carbon double bond which makes up an alkene functional group. The reaction usually runs in a strong acidic, aqueous...
of phenylacetylene
Phenylacetylene
Phenylacetylene is an alkyne hydrocarbon containing a phenyl group. It exists as a colorless, viscous liquid. In research, it is sometimes used as an analog for acetylene; being a liquid, it is easier to handle than acetylene gas.-Preparation:...
that, gold-catalyzed, gives regular acetophenone
Acetophenone
Acetophenone is the organic compound with the formula C6H5CCH3. It is the simplest aromatic ketone. This colourless, viscous liquid is a precursor to useful resins and fragrances.-Production:Acetophenone can be obtained by a variety of methods...
but with a special ruthenium
Ruthenium
Ruthenium is a chemical element with symbol Ru and atomic number 44. It is a rare transition metal belonging to the platinum group of the periodic table. Like the other metals of the platinum group, ruthenium is inert to most chemicals. The Russian scientist Karl Ernst Claus discovered the element...
catalyst the other regioisomer 2-phenylacetaldehyde: 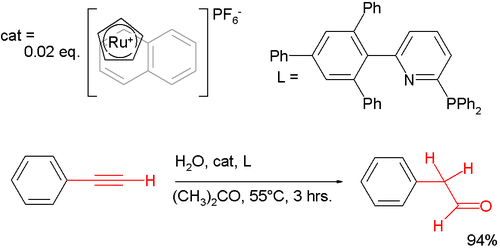 Anti-Markovnikov behaviour can also manifest itself in certain rearrangement reaction
Rearrangement reaction
A rearrangement reaction is a broad class of organic reactions where the carbon skeleton of a molecule is rearranged to give a structural isomer of the original molecule. Often a substituent moves from one atom to another atom in the same molecule...
s. In a titanium(IV) chloride-catalyzed formal nucleophilic substitution
Nucleophilic substitution
In organic and inorganic chemistry, nucleophilic substitution is a fundamental class of reactions in which an electron nucleophile selectively bonds with or attacks the positive or partially positive charge of an atom or a group of atoms called the leaving group; the positive or partially positive...
at enantiopure 1 in the scheme below, two racemic
Racemic
In chemistry, a racemic mixture, or racemate , is one that has equal amounts of left- and right-handed enantiomers of a chiral molecule. The first known racemic mixture was "racemic acid", which Louis Pasteur found to be a mixture of the two enantiomeric isomers of tartaric acid.- Nomenclature :A...
products are formed - 2a and 2b: 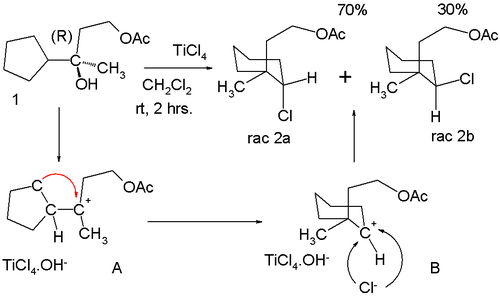 This product distribution can be rationalized by assuming that loss of the hydroxy
Alcohol
In chemistry, an alcohol is an organic compound in which the hydroxy functional group is bound to a carbon atom. In particular, this carbon center should be saturated, having single bonds to three other atoms....
group in 1 gives the tertiary carbocation
Carbocation
A carbocation is an ion with a positively-charged carbon atom. The charged carbon atom in a carbocation is a "sextet", i.e. it has only six electrons in its outer valence shell instead of the eight valence electrons that ensures maximum stability . Therefore carbocations are often reactive,...
A, which rearranges to the seemingly less attractive secondary carbocation B. Chlorine can approach this center from two faces leading to the observed mixture of isomers.