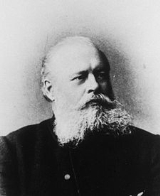 Encyclopedia
Vladimir Vasilyevich Markovnikov , also spelled as Markownikoff (December 22, 1838 in Nizhny Novgorod
Nizhny Novgorod
Nizhny Novgorod , colloquially shortened to Nizhny, is, with the population of 1,250,615, the fifth largest city in Russia, ranking after Moscow, St. Petersburg, Novosibirsk, and Yekaterinburg...
- February 11, 1904) was a Russian chemist
Chemist
A chemist is a scientist trained in the study of chemistry. Chemists study the composition of matter and its properties such as density and acidity. Chemists carefully describe the properties they study in terms of quantities, with detail on the level of molecules and their component atoms...
.

Markovnikov first studied economics and became, after graduation, assistant of Aleksandr Butlerov
Aleksandr Butlerov
Aleksandr Mikhailovich Butlerov was a Russian chemist, one of the principal creators of the theory of chemical structure , the first to incorporate double bonds into structural formulas, the discoverer of hexamine , and the discoverer of the formose reaction.The...
in Kazan and Saint Petersburg. After graduation in 1860 he went to Germany for two years where he studied under Richard Erlenmeyer
Richard August Carl Emil Erlenmeyer
Richard August Carl Emil Erlenmeyer or Emil Erlenmeyer was a German chemist known for formulating the Erlenmeyer Ruleand designing a type of chemical flask.-Biography:...
and Hermann Kolbe
Adolph Wilhelm Hermann Kolbe
Adolph Wilhelm Hermann Kolbe was a German chemist. He never used the first two of his given names, preferring to be known as Hermann Kolbe.-Life:...
. He returned to Russia, received his Ph.D in 1869 and succeeded to Butlerov's professorship at Kazan University. After a conflict with that university he was appointed professor at the University of Odessa
Odessa University
The I. I. Mechnikov Odessa National University , located in Odessa, Ukraine, is one of the country's major universities. It was founded in 1865, by an edict of Czar Alexander II of Russia, reorganizing the Richelieu Lyceum of Odessa into the new Imperial Novorossiya University. In the Soviet...
in 1871, and only two years later at the University of Moscow where he stayed the rest of his career.

Markovnikov is best known for Markovnikov's rule
Markovnikov's rule
In organic chemistry, Markovnikov's rule or Markownikoff's rule is an observation based on Zaitsev's rule. It was formulated by the Russian chemist Vladimir Vasilevich Markovnikov in 1870....
, which he developed in 1869 to describe addition reactions of H-X to alkenes. According to this rule, the nucleophilic X- adds to the carbon atom with fewer hydrogen atoms, while the proton adds to the carbon atom with more hydrogen atoms bonded to it. Thus, hydrogen chloride (HCl) adds to propene, CH3-CH=CH2 to produce 2-chloropropane CH3CHClCH3 rather than the isomeric 1-chloropropane CH3CH2CH2Cl. The rule is useful in predicting the molecular structures of products of addition reactions. Why hydrogen bromide exhibited both Markovnikov as well as reversed-order, or anti-Markovnikov, addition, however, was not understood until Morris S. Kharasch
Morris S. Kharasch
Morris Selig Kharasch was a pioneering organic chemist best known for his work with free radical additions and polymerizations. He defined the peroxide effect, explaining how an anti-Markovnikov orientation could be achieved via free radical addition. Kharasch was born in Russian Empire in 1895...
offered an explanation in 1933.

Hughes has discussed the reasons for Markovnikov's lack of recognition during his lifetime.
Although he published mostly in Russian which was not understood by most Western European chemists, the 1870 article in which he first stated his rule was written in German. However the rule was included in a 4-page addendum to a 26-page article on isomeric butyric acids, and based on very slight experimental evidence even by the standards of the time. Hughes concludes that the rule was an inspired guess, unjustified by the evidence of the time, but which turned out later to be correct (in most cases).

Markovnikov also contributed to organic chemistry
Organic chemistry
Organic chemistry is a subdiscipline within chemistry involving the scientific study of the structure, properties, composition, reactions, and preparation of carbon-based compounds, hydrocarbons, and their derivatives...
by finding carbon
Carbon
Carbon is the chemical element with symbol C and atomic number 6. As a member of group 14 on the periodic table, it is nonmetallic and tetravalent—making four electrons available to form covalent chemical bonds...
rings with more than six carbon atoms, a ring with four carbon atoms in 1879, and a ring with seven in 1889.

Markovnikov also showed that butyric and isobutyric acids have the same chemical formula (C4H8O2) but different structures; i.e., they are isomers.