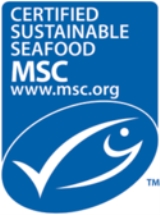 Encyclopedia
The Marine Stewardship Council (MSC) is an independent non-profit organization
Non-profit organization
Nonprofit organization is neither a legal nor technical definition but generally refers to an organization that uses surplus revenues to achieve its goals, rather than distributing them as profit or dividends...
with an ecolabel and fishery certification programme. Fisheries that are assessed and meet the standard can use the MSC blue ecolabel
Ecolabel
Ecolabels and Green Stickers are labelling systems for food and consumer products. Ecolabels are often voluntary, but Green Stickers are mandated by law in North America for major appliances and automobiles. They are a form of sustainability measurement directed at consumers, intended to make it...
. The MSC mission is to 'reward sustainable fishing practices’. When fish
Fish
Fish are a paraphyletic group of organisms that consist of all gill-bearing aquatic vertebrate animals that lack limbs with digits. Included in this definition are the living hagfish, lampreys, and cartilaginous and bony fish, as well as various extinct related groups...
is bought that has the blue MSC ecolabel, it should indicate that this fishery operates in an environmentally responsible way and does not contribute to the global environmental problem of overfishing
Overfishing
Overfishing occurs when fishing activities reduce fish stocks below an acceptable level. This can occur in any body of water from a pond to the oceans....
. As of October 2011, more than 2,021 fisheries and companies had achieved a Marine Stewardship Council certification.

The MSC environmental standard for sustainable fisheries was developed over two years through a consultative process. The three principles of the MSC standard consider:

The MSC standard is consistent with the ‘Guidelines for the Eco-labelling of Fish and Fishery Products from Marine Wild Capture Fisheries’ adopted by the UN Food and Agriculture Organisation (FAO)
Fão
Fão is a town in Esposende Municipality in Portugal....
in 2005. Any fishery that wishes to become MSC certified and use the ecolabel is assessed against the MSC standard by a third party, independent certification body that has been independently accredited to perform MSC assessments by Accreditation Services International (ASI). Chain of custody certification along the supply chain
Supply chain
A supply chain is a system of organizations, people, technology, activities, information and resources involved in moving a product or service from supplier to customer. Supply chain activities transform natural resources, raw materials and components into a finished product that is delivered to...
from boat
Boat
A boat is a watercraft of any size designed to float or plane, to provide passage across water. Usually this water will be inland or in protected coastal areas. However, boats such as the whaleboat were designed to be operated from a ship in an offshore environment. In naval terms, a boat is a...
to point of sale ensures that seafood sold bearing the ecolabel originated from an MSC certified fishery.

The MSC is headed by the Chief Executive who reports to the Board of Trustees. This is supported by the Technical Advisory Board and the Stakeholder Council, (further information on MSC governance). The MSC programme works through a multi-stakeholder partnership approach, taking into account the views of those seeking to secure a sustainable future.

It has offices in London
London
London is the capital city of :England and the :United Kingdom, the largest metropolitan area in the United Kingdom, and the largest urban zone in the European Union by most measures. Located on the River Thames, London has been a major settlement for two millennia, its history going back to its...
(its head office), Seattle
Seattle, Washington
Seattle is the county seat of King County, Washington. With 608,660 residents as of the 2010 Census, Seattle is the largest city in the Northwestern United States. The Seattle metropolitan area of about 3.4 million inhabitants is the 15th largest metropolitan area in the country...
, Washington and Sydney, New South Wales
New South Wales
New South Wales is a state of :Australia, located in the east of the country. It is bordered by Queensland, Victoria and South Australia to the north, south and west respectively. To the east, the state is bordered by the Tasman Sea, which forms part of the Pacific Ocean. New South Wales...
and local offices in Edinburgh
Edinburgh
Edinburgh is the capital city of Scotland, the second largest city in Scotland, and the eighth most populous in the United Kingdom. The City of Edinburgh Council governs one of Scotland's 32 local government council areas. The council area includes urban Edinburgh and a rural area...
, Berlin
Berlin
Berlin is the capital city of Germany and is one of the 16 states of Germany. With a population of 3.45 million people, Berlin is Germany's largest city. It is the second most populous city proper and the seventh most populous urban area in the European Union...
, The Hague
The Hague
The Hague is the capital city of the province of South Holland in the Netherlands. With a population of 500,000 inhabitants , it is the third largest city of the Netherlands, after Amsterdam and Rotterdam...
, Paris
Paris
Paris is the capital and largest city in France, situated on the river Seine, in northern France, at the heart of the Île-de-France region...
, Cape Town
Cape Town
Cape Town is the second-most populous city in South Africa, and the provincial capital and primate city of the Western Cape. As the seat of the National Parliament, it is also the legislative capital of the country. It forms part of the City of Cape Town metropolitan municipality...
and Tokyo
Tokyo
, ; officially , is one of the 47 prefectures of Japan. Tokyo is the capital of Japan, the center of the Greater Tokyo Area, and the largest metropolitan area of Japan. It is the seat of the Japanese government and the Imperial Palace, and the home of the Japanese Imperial Family...
.

As of October 2011, there are over 11,000 seafood products available with the MSC ecolabel, sold in 82 countries around the world. 131 fisheries have been independently certified as meeting the MSC’s environmental standard for sustainable fishing and 131 are currently undergoing assessment, (further information on fisheries engaged in the MSC programme). 1,896 companies have met the MSC Chain of Custody standard for seafood traceability.

The Marine Stewardship Council is a programme for wild fisheries
Wild fisheries of the world
A fishery is an area with an associated fish or aquatic population which is harvested for its commercial value. Fisheries can be marine or freshwater. They can also be wild or farmed. This article is an overview of the habitats occupied by the worlds' wild fisheries, and the human impacts on those...
and does not include aquaculture
Aquaculture
Aquaculture, also known as aquafarming, is the farming of aquatic organisms such as fish, crustaceans, molluscs and aquatic plants. Aquaculture involves cultivating freshwater and saltwater populations under controlled conditions, and can be contrasted with commercial fishing, which is the...
production. However, the MSC programme can contribute to sustainable outcomes along the aquaculture production chain through the certification of feed fish fisheries. As of October 2010 there is one fishery undergoing assessment for MSC certification that produces for fishmeal – the Gulf of California sardine fishery. About 85% of the total production from the Gulf of California
Gulf of California
The Gulf of California is a body of water that separates the Baja California Peninsula from the Mexican mainland...
sardine
Sardine
Sardines, or pilchards, are several types of small, oily fish related to herrings, family Clupeidae. Sardines are named after the Mediterranean island of Sardinia, around which they were once abundant....
fishery is used for reduction to fishmeal and mostly used for animal feed
Fodder
Fodder or animal feed is any agricultural foodstuff used specifically to feed domesticated livestock such as cattle, goats, sheep, horses, chickens and pigs. Most animal feed is from plants but some is of animal origin...
s.

Fish & Kids is a project of the Marine Stewardship Council that encourages school
School
A school is an institution designed for the teaching of students under the direction of teachers. Most countries have systems of formal education, which is commonly compulsory. In these systems, students progress through a series of schools...
s and restaurant
Restaurant
A restaurant is an establishment which prepares and serves food and drink to customers in return for money. Meals are generally served and eaten on premises, but many restaurants also offer take-out and food delivery services...
s in England and Sweden to serve sustainable, MSC labelled seafood. Fish & Kids also aims to raise children’s awareness of sustainable food issues through a classroom resource pack and website using fun games and educational materials.

Jared Diamond
Jared Diamond
Jared Mason Diamond is an American scientist and author whose work draws from a variety of fields. He is currently Professor of Geography and Physiology at UCLA...
's Collapse
Collapse (book)
Collapse: How Societies Choose to Fail or Succeed is a 2005 book by Jared M. Diamond, professor of geography and physiology at University of California, Los Angeles...
praises MSC and the similar Forest Stewardship Council
Forest Stewardship Council
The Forest Stewardship Council is an international not-for-profit, multi-stakeholder organization established in 1993 to promote responsible management of the world’s forests. Its main tools for achieving this are standard setting, independent certification and labeling of forest products...
as good examples of collaboration among environmentalist
Environmentalist
An environmentalist broadly supports the goals of the environmental movement, "a political and ethical movement that seeks to improve and protect the quality of the natural environment through changes to environmentally harmful human activities"...
s and businesses for a sustainable economy.

In early 2010, the MSC was criticised for including the British Columbia
British Columbia
British Columbia is the westernmost of Canada's provinces and is known for its natural beauty, as reflected in its Latin motto, Splendor sine occasu . Its name was chosen by Queen Victoria in 1858...
sockeye fishery in the certification process. This is because in 2009, just a fraction of the salmon returned to the Fraser River
Fraser River
The Fraser River is the longest river within British Columbia, Canada, rising at Fraser Pass near Mount Robson in the Rocky Mountains and flowing for , into the Strait of Georgia at the city of Vancouver. It is the tenth longest river in Canada...
, which prompted the Prime Minister to launch a judicial enquiry.

Scientists at a Simon Fraser University (SFU) summit of Fraser River Sockeye Salmon said of the low salmon run: “In 2009 fisheries responded appropriately by greatly restricting fishing to maximize the number of fish available for spawning. The weight of evidence suggests that the problem of reduced productivity occurred after the juvenile fish began their migration toward the sea.”

The total 2010 Fraser River sockeye return was over 35 million fish; the largest return since 1913.

MSC certification of the B.C. sockeye fishery is confirmation that the management of the fishery aims to ensure that fish stocks remain above critical lower limit levels. Certification was not a conclusion that the stock was currently abundant or that fishing should be taking place at that time.