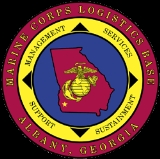 The base comprises more than 3300 acres (13.4 km²) and in 2002 employed more than 2,400 civilians along with a complement of 600 marines. One of the Corps' major commands, Marine Corps Logistics Command, is based at MCLB Albany. The command also encompasses activities at bases in Barstow, California, and Jacksonville, Florida

The base was commissioned on March 1, 1952, as the Marine Corps
United States Marine Corps
The United States Marine Corps is a branch of the United States Armed Forces responsible for providing power projection from the sea, using the mobility of the United States Navy to deliver combined-arms task forces rapidly. It is one of seven uniformed services of the United States...
Depot of Supplies. At that time, Marine Brigadier General
Brigadier General
Brigadier general is a senior rank in the armed forces. It is the lowest ranking general officer in some countries, usually sitting between the ranks of colonel and major general. When appointed to a field command, a brigadier general is typically in command of a brigade consisting of around 4,000...
R.P. Coffman assumed command and a small contingent of Marines established headquarters in temporary buildings.

Albany was chosen as the site for the logistics base after a two-year search in the early 1950s for a level area convenient to the Gulf of Mexico
Gulf of Mexico
The Gulf of Mexico is a partially landlocked ocean basin largely surrounded by the North American continent and the island of Cuba. It is bounded on the northeast, north and northwest by the Gulf Coast of the United States, on the southwest and south by Mexico, and on the southeast by Cuba. In...
and the Atlantic Ocean and serviced by road and rail. Albany was also attractive for its inland location, well away from the possibility of saltwater corrosion of the stored equipment, and its adequate workforce.

Construction continued rapidly, and by early 1954, the station was sufficiently complete with warehouse
Warehouse
A warehouse is a commercial building for storage of goods. Warehouses are used by manufacturers, importers, exporters, wholesalers, transport businesses, customs, etc. They are usually large plain buildings in industrial areas of cities and towns. They usually have loading docks to load and unload...
s and administration buildings to assume supply support for Marines east of the Rocky Mountains
Rocky Mountains
The Rocky Mountains are a major mountain range in western North America. The Rocky Mountains stretch more than from the northernmost part of British Columbia, in western Canada, to New Mexico, in the southwestern United States...
and in the Atlantic area. On July 29, 1954, the command was renamed the Marine Corps Supply Center Albany. The MCSC managed and controlled supplies at storage and issue locations in the eastern half of the United States
United States
The United States of America is a federal constitutional republic comprising fifty states and a federal district...
, the Caribbean Sea
Caribbean Sea
The Caribbean Sea is a sea of the Atlantic Ocean located in the tropics of the Western hemisphere. It is bounded by Mexico and Central America to the west and southwest, to the north by the Greater Antilles, and to the east by the Lesser Antilles....
and the Mediterranean Sea
Mediterranean Sea
The Mediterranean Sea is a sea connected to the Atlantic Ocean surrounded by the Mediterranean region and almost completely enclosed by land: on the north by Anatolia and Europe, on the south by North Africa, and on the east by the Levant...
areas. Depot level rebuild operations began to function at the base in October 1954.

The MCSC Albany was redesignated Marine Corps Logistics Support Base Atlantic on April 1, 1976, because the Marine Corps Supply Activity at Philadelphia and its inventory control, financial management, procurement and technical support functions were relocated to the Albany installation.

On November 1, 1978, the installation was renamed once again – Marine Corps Logistics Base Albany. The full spectrum of logistics support functions required to support the Marine Corps ground weapon systems and equipment was now performed at this base.

Preserving the environment and the wildlife in and around the base has been a priority since the early planning phases of the facility. Colonel A.E. Dubber, the officer who chose the Albany site, insisted early on that he wanted no wildlife disturbed unnecessarily and that as many trees as possible should be saved. Because of his policies the base is lined with pecan orchards and rows of oaks. The so-called Dubber Oak, upon which the base was aligned during construction, still stands near the main gate.

In 1973 more than 200 Indian artifacts were discovered on the base. Arrowheads, flint knives, scrapers, and other ancient tools estimated to be more than 8,000 years old were unearthed by archaeologists. Their presence suggests that the area may have been a trading or supply post for Native Americans.

The EPA has conducted tests (and continues to monitor) the contamination by hazardous substances on the base of the ground and the drinking water supply. http://www.atsdr.cdc.gov/HAC/PHA/marinecorps/mcl_p3.html

From the beginning of the historic buildup of U.S., Arab
Arab
Arab people, also known as Arabs , are a panethnicity primarily living in the Arab world, which is located in Western Asia and North Africa. They are identified as such on one or more of genealogical, linguistic, or cultural grounds, with tribal affiliations, and intra-tribal relationships playing...
and other allied air, ground and naval forces against Iraq
Iraq
Iraq ; officially the Republic of Iraq is a country in Western Asia spanning most of the northwestern end of the Zagros mountain range, the eastern part of the Syrian Desert and the northern part of the Arabian Desert....
during 1990 and 1991 until Operation Desert Storm ended, MCLB Albany and its personnel were deeply involved in the greatest surge of activity in the history of the base. Between August 10, 1990, and March 31, 1991, MCLB Albany provided support to the Marine Air-Ground Task Forces sent to the Persian Gulf
Persian Gulf
The Persian Gulf, in Southwest Asia, is an extension of the Indian Ocean located between Iran and the Arabian Peninsula.The Persian Gulf was the focus of the 1980–1988 Iran-Iraq War, in which each side attacked the other's oil tankers...
area.

During the Persian Gulf War (1990–91) the base's workforce shipped more than 9 million pounds of equipment to air and seaports for rapid transport to troops abroad. Personnel also installed twenty-six "tractor protective kits" on bulldozers used to break through Iraqi barriers and minefields. The armored bulldozers helped open the way for coalition troops to overrun enemy defenses.

During the first phase of activation of Prepositioned War Reserves, MCLB Albany’s Materiel Division (today, MCLB Fleet Support Division and DLA Defense Distribution Depot Albany) shipped more than nine million pounds of goods and equipment on more than 300 semi-trailer truck
Semi-trailer truck
A semi-trailer truck, also known as a semi, tractor-trailer, or articulated truck or articulated lorry, is an articulated vehicle consisting of a towing engine , and a semi-trailer A semi-trailer truck, also known as a semi, tractor-trailer, or (in the United Kingdom and Ireland) articulated truck...
s to airport
Airport
An airport is a location where aircraft such as fixed-wing aircraft, helicopters, and blimps take off and land. Aircraft may be stored or maintained at an airport...
s and seaports of embarkation to Saudi Arabia
Saudi Arabia
The Kingdom of Saudi Arabia , commonly known in British English as Saudi Arabia and in Arabic as as-Sa‘ūdiyyah , is the largest state in Western Asia by land area, constituting the bulk of the Arabian Peninsula, and the second-largest in the Arab World...
. The division’s support continued throughout the crises as its personnel established around the clock operations and worked nearly 50,000 overtime hours packing goods that included 4,800 supplemental items packs and other high priority requisitions for U.S. military personnel. 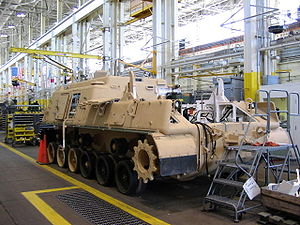 MCLB Albany also provided medical support throughout the crises. Two doctors, eight medical corpsmen and one independent duty technician from the Naval Branch Medical Clinic at the base deployed to the Persian Gulf. Additionally, the Air Force
United States Air Force
The United States Air Force is the aerial warfare service branch of the United States Armed Forces and one of the American uniformed services. Initially part of the United States Army, the USAF was formed as a separate branch of the military on September 18, 1947 under the National Security Act of...
Medical Logistics team at the base had four air transportable hospitals (ATHs) that were assembled at the base prepositioned in the Persian Gulf area. Two additional ATHs, along with 895,000 pounds of additional medical materials and equipment that were assembled at the base were also sent to the Gulf War
Gulf War
The Persian Gulf War , commonly referred to as simply the Gulf War, was a war waged by a U.N.-authorized coalition force from 34 nations led by the United States, against Iraq in response to Iraq's invasion and annexation of Kuwait.The war is also known under other names, such as the First Gulf...
area.

Beans, bullets and band-aids – MCLB Albany provided the men and women in the Persian Gulf area with a multitude of necessities. The Publications Branch at the base sent 29,000 publications and technical manuals to reconstitute the Maritime Prepositioned Force in Saudi Arabia. This work continued for nearly a year after the war ended.

The Maintenance Center performed a myriad of projects and support activities during the war, many of which were innovative and were accomplished in record time. Notable among the Maintenance Center’s support were personnel who developed and installed 26 Tractor Protective Kits on II Marine Expeditionary Force’s bulldozers in the Persian Gulf area. These armor-plated bulldozers broke the paths through Saddam Hussein
Saddam Hussein
Saddam Hussein Abd al-Majid al-Tikriti was the fifth President of Iraq, serving in this capacity from 16 July 1979 until 9 April 2003...
’s so-called "Wall of Death" minefields
Land mine
A land mine is usually a weight-triggered explosive device which is intended to damage a target—either human or inanimate—by means of a blast and/or fragment impact....
and other fortified barriers, opening the roads along which the Marine divisions pursued and defeated the Iraqi army.

More than 100 MCLB Albany Marines, Navy personnel and civilian employees served in Saudi Arabia and the Persian Gulf during Operation Desert Shield and Operation Desert Storm. Although MCLB Albany’s personnel did not deploy, every person here played a critical role in providing those who went with the logistical support they needed.