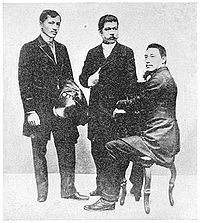 Ponce was born in Baliwag
Baliuag, Bulacan
Baliuag or Baliwag is a 1st Class Urban municipality in the province of Bulacan, Philippines. According to the latest census, it has a population of 136,982 inhabitants in 25,050 households....
, Bulacan
Bulacan
Bulacan , officially called the Province of Bulacan or simply Bulacan Province, is a first class province of the Republic of the Philippines located in the Central Luzon Region in the island of Luzon, north of Manila , and part of the Metro...
where he completed his primary education. He later enrolled at the Colegio de San Juan de Letran
Colegio de San Juan de Letran
The Colegio de San Juan de Letran, Letran College, or simply Letran is a private Roman Catholic institution of learning located in Intramuros, Manila, in the Philippines. The college was founded in 1620. Colegio de San Juan de Letran has the distinction of being the oldest college in the...
and took up medicine at the University of Santo Tomas
University of Santo Tomas
The Pontifical and Royal University of Santo Tomas, The Catholic University of the Philippines , is a private Roman Catholic university run by the Order of Preachers in Manila. Founded on April 28, 1611 by archbishop of Manila Miguel de Benavides, it has the oldest extant university charter in the...
. In 1881, he traveled to Spain
Spain
Spain , officially the Kingdom of Spain languages]] under the European Charter for Regional or Minority Languages. In each of these, Spain's official name is as follows:;;;;;;), is a country and member state of the European Union located in southwestern Europe on the Iberian Peninsula...
to continue his medical studies at the Unversidad Central de Madrid
Complutense University of Madrid
The Complutense University of Madrid is a university in Madrid, and one of the oldest universities in the world. It is located on a sprawling campus that occupies the entirety of the Ciudad Universitaria district of Madrid, with annexes in the district of Somosaguas in the neighboring city of...
.

There he joined Marcelo del Pilar, Graciano López Jaena
Graciano López Jaena
Graciano López Jaena was a Filipino journalist, orator, and revolutionary from Iloilo, well known for his written work, La Solidaridad....
and José Rizal
José Rizal
José Protacio Rizal Mercado y Alonso Realonda , was a Filipino polymath, patriot and the most prominent advocate for reform in the Philippines during the Spanish colonial era. He is regarded as the foremost Filipino patriot and is listed as one of the national heroes of the Philippines by...
in the Propaganda Movement which espoused Filipino representation in the Spanish Cortes
Cortes
Cortes is surname of Spanish and Portuguese origin. Cortes or Cortés may also refer to:-Institutions:* The Cortes , the national legislative assembly of Spain...
and reforms in the Spanish colonial authorities of the Philippines. He wrote in the propaganda publication La Solidaridad
La solidaridad
La Solidaridad was an organization created in Spain on December 13, 1888. Composed of Filipino liberals exiled in 1872 and students attending Europe's universities, the organization aimed to increase Spanish awareness of the needs of its colony, the Philippines, and to propagate a closer...
(The Solidarity).

Ponce was imprisoned when the revolution began on August 1896 but was later released. Fearing another arrest, he fled to France
France
The French Republic , The French Republic , The French Republic , (commonly known as France , is a unitary semi-presidential republic in Western Europe with several overseas territories and islands located on other continents and in the Indian, Pacific, and Atlantic oceans. Metropolitan France...
and later went to Hong Kong
Hong Kong
Hong Kong is one of two Special Administrative Regions of the People's Republic of China , the other being Macau. A city-state situated on China's south coast and enclosed by the Pearl River Delta and South China Sea, it is renowned for its expansive skyline and deep natural harbour...
where he joined a group of Filipinos who served as the international front of the Philippine revolution.

Mariano returned to Manila with his wife, a Japanese girl named Okiyo Udanwara. In 1909, he was made director of "El Renacimiento" (The Renaissance). He also joined the "Nacionalista Partido" (National Party) and established "El Ideal" (The Perfect), the party's official organization. Ponce later ran for a seat in the Philippine Assembly and was elected assemblyman for the second district of Bulacan. Ponce wrote his memoirs, "Cartas Sobre La Revolución" (Letters on the Revolution), he died in the Government Civil Hospital
Sai Ying Pun Community Complex
Sai Ying Pun Community Complex is located at 2 High Street, Sai Ying Pun, Hong Kong. It is a 9-storey building built on the site of the Old Mental Hospital, of which only the granite facade and arched verandah were preserved.-History:...
in Hong Kong, on May 23, 1918. His remains are now interred in the Cementerio del Norte
Manila North Cemetery
The Manila North Cemetery , which measures 54 hectares, is considered the biggest and one of the oldest cemeteries in Metro Manila. Beside it are two other important cemeteries, namely the La Loma Cemetery and the Manila Chinese Cemetery...
, Manila
Manila
Manila is the capital of the Philippines. It is one of the sixteen cities forming Metro Manila.Manila is located on the eastern shores of Manila Bay and is bordered by Navotas and Caloocan to the north, Quezon City to the northeast, San Juan and Mandaluyong to the east, Makati on the southeast,...
.