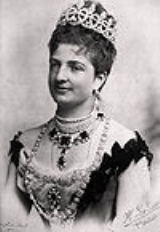 Encyclopedia
Margherita of Savoy was the Queen consort
Queen consort
A queen consort is the wife of a reigning king. A queen consort usually shares her husband's rank and holds the feminine equivalent of the king's monarchical titles. Historically, queens consort do not share the king regnant's political and military powers. Most queens in history were queens consort...
of the Kingdom of Italy
Kingdom of Italy (1861–1946)
The Kingdom of Italy was a state forged in 1861 by the unification of Italy under the influence of the Kingdom of Sardinia, which was its legal predecessor state...
during the reign (1878–1900) of her husband, Umberto I
Umberto I of Italy
Umberto I or Humbert I , nicknamed the Good , was the King of Italy from 9 January 1878 until his death. He was deeply loathed in far-left circles, especially among anarchists, because of his conservatism and support of the Bava-Beccaris massacre in Milan...
.

She was a daughter of Prince Ferdinand, Duke of Genoa and Princess Elisabeth of Saxony. Her paternal grandparents were Charles Albert, King of Sardinia
Charles Albert of Sardinia
Charles Albert was the King of Piedmont-Sardinia from 1831 to 1849. He succeeded his distant cousin Charles Felix, and his name is bound with the first Italian statute and the First War of Independence...
and Maria Theresa of Austria. Her maternal grandparents were John, King of Saxony and Amalie Auguste, Princess of Bavaria.

She married her first cousin Umberto, Prince of Piedmont on 21 April 1868. On 11 November 1869, Margherita gave birth to Victor Emmanuel, Prince of Naples
Naples
Naples is a city in Southern Italy, situated on the country's west coast by the Gulf of Naples. Lying between two notable volcanic regions, Mount Vesuvius and the Phlegraean Fields, it is the capital of the region of Campania and of the province of Naples...
, afterwards Victor Emmanuel III of Italy
Victor Emmanuel III of Italy
Victor Emmanuel III was a member of the House of Savoy and King of Italy . In addition, he claimed the crowns of Ethiopia and Albania and claimed the titles Emperor of Ethiopia and King of Albania , which were unrecognised by the Great Powers...
. He was their only child.

Margherita encouraged artists and writers and founded cultural institutions, notably the Società del Quartetto, and the Casa di Dante. She was a benefactor of many charities, especially the Red Cross.

In 1889, the Margherita pizza
Pizza
Pizza is an oven-baked, flat, disc-shaped bread typically topped with a tomato sauce, cheese and various toppings.Originating in Italy, from the Neapolitan cuisine, the dish has become popular in many parts of the world. An establishment that makes and sells pizzas is called a "pizzeria"...
, whose red tomatoes, green basil, and white cheese represent the Italian flag, was named after her
History of pizza
Pizza is a type of bread and dish that has existed since time immemorial in Middle Eastern and Mediterranean cuisine. The term 'pizza' first appeared "in a Latin text from the southern Italian town of Gaeta in 997 AD, which claims that a tenant of certain property is to give the bishop of Gaeta...
. Her name means "daisy" in Italian
Italian language
Italian is a Romance language spoken mainly in Europe: Italy, Switzerland, San Marino, Vatican City, by minorities in Malta, Monaco, Croatia, Slovenia, France, Libya, Eritrea, and Somalia, and by immigrant communities in the Americas and Australia...
. In 1906, the Queen mother’s nephew Luigi Amedeo, Duke of the Abruzzi
Luigi Amedeo, Duke of the Abruzzi
Prince Luigi Amedeo Giuseppe Maria Ferdinando Francesco di Savoia-Aosta , Duke of the Abruzzi , was an Italian nobleman, mountaineer and explorer of the royal House of Savoy...
made the first ascent of the highest summit of Mount Stanley (the third highest mountain in Africa) and named it Margherita Peak in her honour.

On 18 August 1893, in the company of various guides, porters, Alpini
Alpini
The Alpini, , are the elite mountain warfare soldiers of the Italian Army. They are currently organized in two operational brigades, which are subordinated to the Alpini Corps Command. The singular is Alpino ....
, politicians and aristocrats, she climbed the Punta Gnifetti (or Signalkuppe), a peak of the Monte Rosa
Monte Rosa
The Monte Rosa Massif is a mountain massif located in the eastern part of the Pennine Alps. It is located between Switzerland and Italy...
massif on the Swiss-Italian border, for the inauguration of the mountain hut named after her. At 4,554 metres the Capanna Regina Margherita, remains the highest hut in Europe
Europe
Europe is, by convention, one of the world's seven continents. Comprising the westernmost peninsula of Eurasia, Europe is generally 'divided' from Asia to its east by the watershed divides of the Ural and Caucasus Mountains, the Ural River, the Caspian and Black Seas, and the waterways connecting...
.

Politically she leant towards Fascism
Italian Fascism
Italian Fascism also known as Fascism with a capital "F" refers to the original fascist ideology in Italy. This ideology is associated with the National Fascist Party which under Benito Mussolini ruled the Kingdom of Italy from 1922 until 1943, the Republican Fascist Party which ruled the Italian...
—in October 1922 the quadrumvirs (Emilio De Bono
Emilio De Bono
Emilio De Bono was an Italian General, fascist activist, Marshal, and member of the Fascist Grand Council . De Bono fought in the Italo-Turkish War, World War I, and the Second Italo-Abyssinian War.-Early life:De Bono was born in Cassano d'Adda...
, Italo Balbo
Italo Balbo
Italo Balbo was an Italian Blackshirt leader who served as Italy's Marshal of the Air Force , Governor-General of Libya, Commander-in-Chief of Italian North Africa , and the "heir apparent" to Italian dictator Benito Mussolini.After serving in...
, Michele Bianchi
Michele Bianchi
Michele Bianchi was an Italian revolutionary syndicalist leader. He was among the founding members of the Fascist movement. He was widely seen as the dominant leader of the leftist, syndicalist wing of the National Fascist Party, and one of the most influential politicians of the regime before his...
and Cesare Maria de Vecchi
Cesare Maria De Vecchi
Cesare Maria De Vecchi, 1st Conte di Val Cismon was an Italian soldier, colonial administrator and Fascist politician.-Biography:...
) visited her at Bordighera
Bordighera
Bordighera is a town and comune in the Province of Imperia, Liguria .-History:The city was founded around the 4th century BC by the Ligures....
to pay their respects prior to the March on Rome
March on Rome
The March on Rome was a march by which Italian dictator Benito Mussolini's National Fascist Party came to power in the Kingdom of Italy...
.