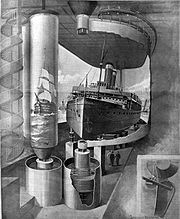 The Mareorama was an entertainment attraction at the 1900 Paris Exposition
Exposition Universelle (1900)
The Exposition Universelle of 1900 was a world's fair held in Paris, France, from April 15 to November 12, 1900, to celebrate the achievements of the past century and to accelerate development into the next...
. It was created by Hugo d'Alesi, a painter of advertising posters, and was a combination of moving panoramic painting
Panoramic painting
Panoramic paintings are massive artworks that reveal a wide, all-encompassing view of a particular subject, often a landscape, military battle, or historical event. They became especially popular in the 19th Century in Europe and the United States, inciting opposition from writers of Romantic poetry...
s and a large motion platform. It is regarded as one of the last major developments in the technology of panoramas, shortly before the medium became obsolete.

The attraction was located inside a building in the amusement section, on the Champ de Mars
Champ de Mars
The Champ de Mars is a large public greenspace in Paris, France, located in the seventh arrondissement, between the Eiffel Tower to the northwest and the École Militaire to the southeast. The park is named after the Campus Martius in Rome, a tribute to the Roman god of war...
. It presented spectators with a simulated sea voyage from Marseille
Marseille
Marseille , known in antiquity as Massalia , is the second largest city in France, after Paris, with a population of 852,395 within its administrative limits on a land area of . The urban area of Marseille extends beyond the city limits with a population of over 1,420,000 on an area of...
to Yokohama
Yokohama
is the capital city of Kanagawa Prefecture and the second largest city in Japan by population after Tokyo and most populous municipality of Japan. It lies on Tokyo Bay, south of Tokyo, in the Kantō region of the main island of Honshu...
, passing by Algiers
Algiers
' is the capital and largest city of Algeria. According to the 1998 census, the population of the city proper was 1,519,570 and that of the urban agglomeration was 2,135,630. In 2009, the population was about 3,500,000...
, Naples
Naples
Naples is a city in Southern Italy, situated on the country's west coast by the Gulf of Naples. Lying between two notable volcanic regions, Mount Vesuvius and the Phlegraean Fields, it is the capital of the region of Campania and of the province of Naples...
, Istanbul
Istanbul
Istanbul , historically known as Byzantium and Constantinople , is the largest city of Turkey. Istanbul metropolitan province had 13.26 million people living in it as of December, 2010, which is 18% of Turkey's population and the 3rd largest metropolitan area in Europe after London and...
, the Suez Canal
Suez Canal
The Suez Canal , also known by the nickname "The Highway to India", is an artificial sea-level waterway in Egypt, connecting the Mediterranean Sea and the Red Sea. Opened in November 1869 after 10 years of construction work, it allows water transportation between Europe and Asia without navigation...
, Sri Lanka
Sri Lanka
Sri Lanka, officially the Democratic Socialist Republic of Sri Lanka is a country off the southern coast of the Indian subcontinent. Known until 1972 as Ceylon , Sri Lanka is an island surrounded by the Indian Ocean, the Gulf of Mannar and the Palk Strait, and lies in the vicinity of India and the...
, and Singapore
Singapore
Singapore , officially the Republic of Singapore, is a Southeast Asian city-state off the southern tip of the Malay Peninsula, north of the equator. An island country made up of 63 islands, it is separated from Malaysia by the Straits of Johor to its north and from Indonesia's Riau Islands by the...
. It consisted of a 70 m (230 ft) long replica of a steamship and 2 panoramas (one for the port side, one for the starboard) on large rollers. It could accommodate up to 700 passengers at a time.

The two paintings were continuous images of the sea and shoreline from the trip. They were each 750 m (2,460 ft) long and 13 m (42.5 ft) tall. To create them, d'Alesi sketched the highlights from a year-long trip he took between Marseille and Yokohama. He then directed a large team of decorative and scene painters for eight months, to transfer the sketches onto the 20,000 m² (215,000 square feet) of canvas. Mounted on large cylinders supported by floats, and driven by hydraulic motors, the two canvases unrolled past the spectators over the course of the simulated journey. The upper edge of each canvas was hooked to small trolleys on a rail and reinforced with a thin steel band to prevent sagging. The cylinders themselves were concealed by curtains and props.

Spectators stood on a platform which represented the deck of a steamship, complete with smoking funnels and steam whistles. In order to give it a rolling and pitching motion, it was mounted on a 5 m (16 ft) square iron frame on a gimbal
Gimbal
A gimbal is a pivoted support that allows the rotation of an object about a single axis. A set of two gimbals, one mounted on the other with pivot axes orthogonal, may be used to allow an object mounted on the innermost gimbal to remain immobile regardless of the motion of its support...
. A combination of hydraulic cylinder
Hydraulic cylinder
A Hydraulic cylinder is a mechanical actuator that is used to give a unidirectional force through a unidirectional stroke. It has many applications, notably in engineering vehicles.- Operation :...
s, chains, and electric motors allowed the platform to pitch by up to 50 cm (20 inches) from horizontal, and to roll by up to 20 cm (8 inches).

To add to the illusion of a sea voyage, fans created an ocean breeze, which whistled in the rigging. Lighting effects created day- and night-time, as well as flashes of lightning. There were also sounds of the ship's screw
Propeller
A propeller is a type of fan that transmits power by converting rotational motion into thrust. A pressure difference is produced between the forward and rear surfaces of the airfoil-shaped blade, and a fluid is accelerated behind the blade. Propeller dynamics can be modeled by both Bernoulli's...
and the steam siren. Seaweed and tar provided an olfactory
Olfaction
Olfaction is the sense of smell. This sense is mediated by specialized sensory cells of the nasal cavity of vertebrates, and, by analogy, sensory cells of the antennae of invertebrates...
element of the simulation. Finally, the whole experience was complemented by actors portraying deck hands, rushing about, "ostensibly to help anyone who may suffer from mal de mer".
The source of this article is wikipedia, the free encyclopedia.  The text of this article is licensed under the GFDL.