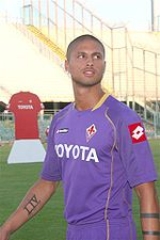 Encyclopedia
Manuel Marouane da Costa Trindade Senoussi (born 6 May 1986 in Saint-Max
Saint-Max
Saint-Max semblerait remonter aux premiers temps de la conquête de la Gaule par les Romains : le Chemin stratégique s'appelait autrefois "Chemin des Romains". Il traverse "La Gueule le Loup" et jusqu'au Plateau de Malzéville...
), known as Manuel da Costa, is a Portuguese
Portugal
Portugal , officially the Portuguese Republic is a country situated in southwestern Europe on the Iberian Peninsula. Portugal is the westernmost country of Europe, and is bordered by the Atlantic Ocean to the West and South and by Spain to the North and East. The Atlantic archipelagos of the...
footballer
Football (soccer)
Association football, more commonly known as football or soccer, is a sport played between two teams of eleven players with a spherical ball...
who plays as a centre-back for FC Lokomotiv Moscow
FC Lokomotiv Moscow
The following years were rather successful as Lokomotiv were consistent in the national championships. However, performances after World War II suffered and actually in the space of five year Lokomotiv were relegated to the Soviet First League twice. In 1951, Lokomotiv came second and eventually...
. Da Costa was born in France
France
The French Republic , The French Republic , The French Republic , (commonly known as France , is a unitary semi-presidential republic in Western Europe with several overseas territories and islands located on other continents and in the Indian, Pacific, and Atlantic oceans. Metropolitan France...
, but qualifies to play for Portugal
Portugal national football team
The Portugal national football team represents Portugal in association football and is controlled by the Portuguese Football Federation, the governing body for football in Portugal. Portugal's home ground is Estádio Nacional in Oeiras, and their head coach is Paulo Bento...
, through his parents (born from a Portuguese father and a Moroccan
Morocco
Morocco , officially the Kingdom of Morocco , is a country located in North Africa. It has a population of more than 32 million and an area of 710,850 km², and also primarily administers the disputed region of the Western Sahara...
mother).

Aft er rejecting offers from Bordeaux
FC Girondins de Bordeaux
Football Club des Girondins de Bordeaux is a French association football club based in the city of Bordeaux. The club currently play in Ligue 1, the first division of French football, and won its last Ligue 1 title in the 2008–09 season....
and Newcastle United
Newcastle United F.C.
Newcastle United Football Club is an English professional association football club based in Newcastle upon Tyne, Tyne and Wear. The club was founded in 1892 by the merger of Newcastle East End and Newcastle West End, and has played at its current home ground, St James' Park, since the merger...
, he opted to play in the Netherlands
Netherlands
The Netherlands is a constituent country of the Kingdom of the Netherlands, located mainly in North-West Europe and with several islands in the Caribbean. Mainland Netherlands borders the North Sea to the north and west, Belgium to the south, and Germany to the east, and shares maritime borders...
with PSV, where the glamour of Champions League football caught his eye. The 20-year-old centre-back agreed a five-year contract with the Dutch champions to become new coach Ronald Koeman
Ronald Koeman
Ronald Koeman is a former Dutch footballer, and the current manager of Feyenoord. He is the younger brother of former Feyenoord coach Erwin Koeman and the son of former Dutch international Martin Koeman...
's second summer signing at €1 million. Da Costa was given the number 14 shirt, and he stated: "It will be a beautiful base to grow and develop with PSV." 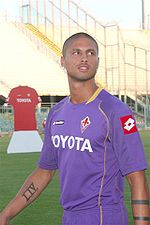 Da Costa, after a first season to get acquainted to a new challenge, gradually became more important in Koeman's side in 2007–08, establishing himself as a versatile defender. He played his first Champions League match on 12 September 2006, in a 0–0 home draw against Liverpool
Liverpool F.C.
Liverpool Football Club is an English Premier League football club based in Liverpool, Merseyside. Liverpool has won eighteen League titles, second most in English football, seven FA Cups and a record seven League Cups...
.

Da Costa did not manage to make a breakthrough into Fiorentina's first team, making just one appearance in the Italian Serie A
Serie A
Serie A , now called Serie A TIM due to sponsorship by Telecom Italia, is a professional league competition for football clubs located at the top of the Italian football league system and has been operating for over eighty years since 1929. It had been organized by Lega Calcio until 2010, but a new...
. On 30 January 2009, he agreed for a loan move to Sampdoria
U.C. Sampdoria
Unione Calcio Sampdoria is an Italian association football club based in Genoa. The club was formed in 1946 from the merger of two existing sports clubs whose roots can be traced back to the 1890s, Sampierdarenese and Andrea Doria...
till the end of the season.

In August 2009 he signed a three-year contract with English side West Ham United
West Ham United F.C.
West Ham United Football Club is an English professional football club based in Upton Park, Newham, East London. They play in The Football League Championship. The club was founded in 1895 as Thames Ironworks FC and reformed in 1900 as West Ham United. In 1904 the club relocated to their current...
, for an undisclosed fee, as part of a deal that took Savio Nsereko
Savio Nsereko
Savio Magala Nsereko , more commonly known as Savio, is a Ugandan-born German footballer who plays for Juve Stabia on loan from Fiorentina...
to Fiorentina. Da Costa made his debut for West Ham in their 3–1 away defeat in the League Cup
Football League Cup
The Football League Cup, commonly known as the League Cup or, from current sponsorship, the Carling Cup, is an English association football competition. Like the FA Cup, it is played on a knockout basis...
to Bolton Wanderers
Bolton Wanderers F.C.
Bolton Wanderers Football Club is an English professional association football club based in the area of Horwich in the Metropolitan Borough of Bolton, Greater Manchester. They began their current spell in the Premier League in 2001....
on 22 September 2009. His league debut arrived on 28 September 2009 in a 3–1 defeat at Eastlands
City of Manchester Stadium
The City of Manchester Stadium in Manchester, England – also known as the Etihad Stadium for sponsorship purposes– is the home ground of...
to Manchester City
Manchester City F.C.
Manchester City Football Club is an English Premier League football club based in Manchester. Founded in 1880 as St. Mark's , they became Ardwick Association Football Club in 1887 and Manchester City in 1894...
. He scored his first goal for West Ham against Hull City
Hull City A.F.C.
Hull City Association Football Club is an English association football club based in Kingston upon Hull, East Riding of Yorkshire, founded in 1904. The club participates in the Football League Championship, the second tier of English football...
in a 3–3 draw at the KC Stadium
KC Stadium
The KC Stadium, often shortened to the KC, is a multi-purpose facility in the city of Kingston upon Hull , England. Conceived as early as the late 1990s, it was completed in 2002 at a cost of approximately £44 million. It is named after the stadium's sponsors, telecommunications provider KC,...
on 21 November 2009. Da Costa left West Ham in June 2011. He had played 35 games in all competitions scoring four goals including two against Stoke City
Stoke City F.C.
Stoke City Football Club is an English professional football club based in Stoke-on-Trent, Staffordshire that plays in the Premier League. Founded in 1863, it is the oldest club in the Premier League, and considered to be the second oldest professional football club in the world, after Notts...
and one against Everton
Everton F.C.
Everton Football Club are an English professional association football club from the city of Liverpool. The club competes in the Premier League, the highest level of English football...
.

In June 2011 he left West Ham to join Lokomotiv Moscow for an undisclosed fee after West Ham were relegated from the Premier League.

In January 2011 da Costa was charged with sexual assault
Sexual assault
Sexual assault is an assault of a sexual nature on another person, or any sexual act committed without consent. Although sexual assaults most frequently are by a man on a woman, it may involve any combination of two or more men, women and children....
and common assault on a woman in a nightclub in Ilford
Ilford
Ilford is a large cosmopolitan town in East London, England and the administrative headquarters of the London Borough of Redbridge. It is located northeast of Charing Cross and is one of the major metropolitan centres identified in the London Plan. It forms a significant commercial and retail...
. He appeared at Redbridge
Redbridge, London
Redbridge is a district of Ilford in the London Borough of Redbridge in north-east London. It is home to Redbridge Institute of Adult Education and Redbridge Football Club.-Etymology:...
Magistrates' Court on January 25. He did not enter a plea and was remanded on bail to appear at Snaresbrook
Snaresbrook
Snaresbrook is an area of north-east London, mostly in the London Borough of Redbridge. A small part falls within the London Borough of Waltham Forest...
Crown Court on 18 April 2011.
On 18 April he pleaded not guilty to sexual assault on a woman in Ilford in October 2010 but admitted one charge of common assault. He was released on conditional bail to stand trial at Snaresbrook Crown Court on 12 September 2011. On 16 September he was cleared of groping a woman in a nightclub. But he was fined £1,000 at Snaresbrook Crown Court for slapping her in the face. The judge ordered him to pay £250 compensation to the victim.