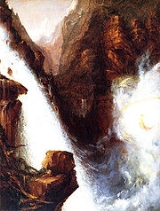 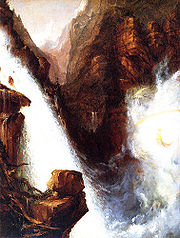 Manfred is a Faust
Faust
Faust is the protagonist of a classic German legend; a highly successful scholar, but also dissatisfied with his life, and so makes a deal with the devil, exchanging his soul for unlimited knowledge and worldly pleasures. Faust's tale is the basis for many literary, artistic, cinematic, and musical...
ian noble living in the Bernese Alps
Bernese Alps
The Bernese Alps are a group of mountain ranges in the western part of the Alps, in Switzerland. Although the name suggests that they are located in the Bernese Oberland region of the canton of Bern, portions of the Bernese Alps are in the adjacent cantons of Valais, Lucerne, Obwalden, Fribourg and...
. Internally tortured by some mysterious guilt, which has to do with the death of his most beloved, Astarte, he uses his mastery of language and spell-casting to summon seven spirits, from whom he seeks forgetfulness. The spirits, who rule the various components of the corporeal world, are unable to control past events and thus cannot grant Manfred's plea. For some time, fate
Destiny
Destiny or fate refers to a predetermined course of events. It may be conceived as a predetermined future, whether in general or of an individual...
prevents him from escaping his guilt through suicide. At the end, Manfred dies defying religious temptations of redemption from sin. Throughout the poem, he succeeds in challenging all authoritative powers he comes across, and chooses death over submitting to spirits of higher powers. Manfred directs his final words to the Abbot, remarking, "Old man! 't is not so difficult to die."

Manfred was written shortly after the failure of Byron's marriage to Annabelle Millbanke, who most likely accused him of an incestuous relationship with his half-sister Augusta Leigh
Augusta Leigh
Augusta Maria Byron, later Augusta Maria Leigh , styled "The Honourable" from birth, was the only daughter of John "Mad Jack" Byron, the poet Lord Byron's father, by his first wife, Amelia Osborne .-Early...
. At the time, he had exile
Exile
Exile means to be away from one's home , while either being explicitly refused permission to return and/or being threatened with imprisonment or death upon return...
d himself permanently from England and was living at the Villa Diodati
Villa Diodati
The Villa Diodati is a manor in Cologny close to Lake Geneva. It is most famous for having been the summer residence of Lord Byron, Mary Shelley, Percy Shelley, John Polidori and others in 1816, where the basis for the classical horror stories Frankenstein and The Vampyre was laid.Originally called...
in Switzerland. Most of Manfred was written on a tour through the Bernese Alps
Bernese Alps
The Bernese Alps are a group of mountain ranges in the western part of the Alps, in Switzerland. Although the name suggests that they are located in the Bernese Oberland region of the canton of Bern, portions of the Bernese Alps are in the adjacent cantons of Valais, Lucerne, Obwalden, Fribourg and...
in September 1816. The third act was rewritten in February 1817 since Byron was not happy with its first version.

Manfred shows some influence by Goethe
Johann Wolfgang von Goethe
Johann Wolfgang von Goethe was a German writer, pictorial artist, biologist, theoretical physicist, and polymath. He is considered the supreme genius of modern German literature. His works span the fields of poetry, drama, prose, philosophy, and science. His Faust has been called the greatest long...
's Faust
Faust
Faust is the protagonist of a classic German legend; a highly successful scholar, but also dissatisfied with his life, and so makes a deal with the devil, exchanging his soul for unlimited knowledge and worldly pleasures. Faust's tale is the basis for many literary, artistic, cinematic, and musical...
, which Byron only read or heard in translation, but it is by no means a simple copy.

Manfred was not originally intended for the stage; it was written to be a dramatic poem or as Byron called it a "metaphysical" drama.

Manfred has received much more attention on stage for its musical treatments by Tchaikovsky and Schumann than it has on its own dramatic terms. It was later famously played by Samuel Phelps
Samuel Phelps
Samuel Phelps was an English actor and theatre manager...
. There are no recorded full stagings in Britain in the twentieth century, but readings are more popular, partly because of the difficulty of staging a play set in the Alps, partly because of the works nature as a closet-drama that was never actually intended for the stage in the first place. The exceptional size of the role of Manfred also makes the play difficult to cast. There was a production on BBC Radio 3
BBC Radio 3
BBC Radio 3 is a national radio station operated by the BBC within the United Kingdom. Its output centres on classical music and opera, but jazz, world music, drama, culture and the arts also feature. The station is the world’s most significant commissioner of new music, and its New Generation...
in 1988, however, which starred Ronald Pickup
Ronald Pickup
-Life and career:Pickup was born in Chester, England, the son of Daisy and Eric Pickup, who was a lecturer. Pickup was educated at The King's School, Chester, trained at the Royal Academy of Dramatic Art in London, and became an Associate Member of RADA.His television work began with an episode...
as Manfred.

Indeed, the Count of Monte Cristo is quite similar to Manfred, in that he wants to keep his past a secret, feels superior to social conventions, and is following an agenda that runs counter to the social mores.

Manfred's oft-quoted speech from Act II Scene 1 which begins "Thinks't thou existence doth depend on time?" is quoted on page 351 of The Masters of Solitude
The Masters of Solitude
The Masters of Solitude, is a 1978 science fiction novel written by Marvin Kaye and Parke Godwin, which is also the first novel in a trilogy of the same name. The other two novels in the series are Wintermind, 1982 and A Cold Blue Light, 1983....
by Marvin Kaye
Marvin Kaye
Marvin Nathan Kaye is an American mystery, fantasy, science fiction, and horror author and editor. He has also edited numerous horror anthologies, such as H. P. Lovecraft's Magazine of Horror and Sherlock Holmes Mystery Magazine...
and Parke Godwin.

"In Byron’s poem, the hero, a superhuman character, is doomed by fate to destroy those he loves. In vain he undertakes to find Astarte, his ideal spirit who alone has the power to assuage the feeling of guilt with which he is obsessed.

The argument for Manfred, in the choreographic version, lets the imagination run free using this basic theme to which references borrowed from other autographical poems by Byron have been associated. Inspiration has also been taken from the libretto that Tchaikovsky produced from the original work.

The characters and events forming the storyline come from the life of Byron himself. Therefore, we meet the loves and hates of his youth, his tireless quest for wisdom and peace, in friendship, in love, and in patriotic fervour."
Programme for Manfred, Palais des Sports, 1979.