Encyclopedia
A malt house, or maltings, is a building where cereal grain is converted into malt
Malt
Malt is germinated cereal grains that have been dried in a process known as "malting". The grains are made to germinate by soaking in water, and are then halted from germinating further by drying with hot air...
by soaking it in water, allowing it to sprout and then drying it to stop further growth. The malt is used in brewing beer
Beer
Beer is the world's most widely consumed andprobably oldest alcoholic beverage; it is the third most popular drink overall, after water and tea. It is produced by the brewing and fermentation of sugars, mainly derived from malted cereal grains, most commonly malted barley and malted wheat...
, whisky
Whisky
Whisky or whiskey is a type of distilled alcoholic beverage made from fermented grain mash. Different grains are used for different varieties, including barley, malted barley, rye, malted rye, wheat, and corn...
and in certain foods. The traditional malt house was largely phased out during the twentieth century in favour of more mechanised production. Many malt houses have been converted to other uses, such as Snape Maltings
Snape Maltings
Snape Maltings is part of Snape, Suffolk, U.K., best known for its concert hall, which is one of the main sites of the annual Aldeburgh Festival....
which is now a concert hall.

The grain was first soaked in a steeping pit or cistern for a day or more. This was constructed of brick or stone, and was sometimes lined with lead. It was rectangular and no more than 40 inches (101.6 cm) deep. Soon after being covered with water, the grain began to swell and increase its bulk by 25 percent.

The cistern was then drained and the grain transferred to another vessel called a couch, either a permanent construction, or temporarily formed with wooden boards. Here it was piled 12 – deep, and began to generate heat and start to germinate. It spent a day or two here, according to the season and the maltster's practice.

It was then spread out on the growing floor, the depth dictated by the temperature, but sufficiently deep to encourage vegetation. It was turned at intervals to achieve even growth and over the next fourteen days or so it is turned and moved towards the kiln
Kiln
A kiln is a thermally insulated chamber, or oven, in which a controlled temperature regime is produced. Uses include the hardening, burning or drying of materials...
. The temperature was also controlled by ventilation. A day or two after the grain was turned out on to the floor, an agreeable smell was given off, and roots soon began to appear. A day or so later the future stem began to swell, and the kernel became friable and sweet-tasting. As the germination proceeded the grain was spread thinner on the floor. The process was halted before the stem burst the husk. At this stage much of the starch in the grain had been converted to maltose
Maltose
Maltose , or malt sugar, is a disaccharide formed from two units of glucose joined with an αbond, formed from a condensation reaction. The isomer "isomaltose" has two glucose molecules linked through an α bond. Maltose is the second member of an important biochemical series of glucose chains....
and the grain was left on the floor to dry. The art of malting depends on the proper regulation of these changes in the grain. Maltsters varied in their manner of working, and adapted to changes in climatic conditions.

The barley was then moved into the kiln, 4 –, for between two and four days, depending on whether a light or dark malt was required. A slow fire was used to start, and then gradually raised to suit the purpose of the malt and the desired colour. The barley was then sieved to remove the shoots and stored for a few months to develop flavour.


Malt houses in the United Kingdom 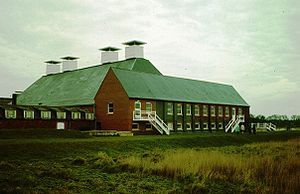 Many villages had a malt house in the eighteenth century, supplying the needs of local publicans, estates and home brewers. Malt houses are typically long, low buildings, no more than two storeys high, in a vernacular
Vernacular architecture
Vernacular architecture is a term used to categorize methods of construction which use locally available resources and traditions to address local needs and circumstances. Vernacular architecture tends to evolve over time to reflect the environmental, cultural and historical context in which it...
style. The germination of barley is hindered by high temperatures, so many malt houses only operated in the winter. This provided employment for agricultural workers whose labour was not much in demand during the winter months.

During the nineteenth century many small breweries disappeared. Improved techniques allowed larger breweries and specialist maltsters to build their own maltings and operate year round. These were often housed in multi-storey buildings. It was also more efficient to transport malt than barley to the brewery, so many large breweries set up their own maltings near railways in the barley growing districts of eastern England.

Towards the end of the nineteenth century, pneumatic malting was introduced, in which the barley is aerated and the temperature carefully controlled, accelerating the germination. Large malting floors were no longer necessary, but power consumption was high, so floor malting held on well into the twentieth century. Only a handful of traditional malting floors are still in use.


Notable malthouses in the UK

There were also numerous regulations in place regarding the malting process. The cistern and the couch-frame had to be constructed in a particular manner, to permit the excise officer to gauge the grain. The maltster had to give notice before wetting any grain; 24 hours in the city or market-town, 48 hours elsewhere. The grain had to be kept covered with water for 48 hours, excepting one hour for changing the water. Grain could only be put in the cistern between 8am and 2pm, and taken out between 7am and 4pm. It had to remain in the couch frame for at least 26 hours. Once thrown out of the cistern, it could not be sprinkled for 12 days. A survey book or ledger had to be kept to record the process and the gauging of the grain in the cistern, the couch, and on the floor. The volume of the grain was carefully measured, based upon the mean width, length and height, and calculated by mental arithmetic, pen and paper, or slide rule
Slide rule
The slide rule, also known colloquially as a slipstick, is a mechanical analog computer. The slide rule is used primarily for multiplication and division, and also for functions such as roots, logarithms and trigonometry, but is not normally used for addition or subtraction.Slide rules come in a...
. The duty to be charged was based upon the largest gauge of either the cistern, couch or floor after a multiplying factor of 1.6 was applied to the larger of the cistern or couch gauges.


From the walls an overhanging thatched roof sloped up to a point in the centre, upon which rose a small wooden lantern, fitted with louvre-boards on all the four sides, and from these openings a mist was dimly perceived to be escaping into the night air ... Gabriel's nose was greeted by an atmosphere laden with the sweet smell of new malt ...