Encyclopedia
The Ospital ng Maynila Medical Center (Hospital of Manila; abbreviation
Acronyms in the Philippines
Acronyms are popular in the Philippines.- Geography :Geography is one area prone to acronyms. Many times, when a group of places is formed, instead of coining a descriptive term for the group, an acronym that stands for the individual places is created...
: OMMC) is a 300-bed non-profit tertiary, general and training hospital in Malate
Malate, Manila
Malate is an old district of the city of Manila in Metro Manila, the Philippines. The district is located at the southern end of the city of Manila, bordered by Pasay City to the south, by Manila Bay to the west, by the district of Ermita to the north and by the districts of Paco and San Andres to...
, Manila
Manila
Manila is the capital of the Philippines. It is one of the sixteen cities forming Metro Manila.Manila is located on the eastern shores of Manila Bay and is bordered by Navotas and Caloocan to the north, Quezon City to the northeast, San Juan and Mandaluyong to the east, Makati on the southeast,...
, Philippines. It is the laboratory hospital of health science students (students of medicine, nursing and physical therapy) enrolled at the Pamantasan ng Lungsod ng Maynila, one of the Philippines' most prestigious universities.

As hospital operated and maintained through taxes paid by Manila residents, OMMC has for its primary concern the admission and treatment of patients who are bonafide residents of the city. Furthermore, it is responsible for the provision of an integrated community health program and in the promotion of scientific excellence through research activities. 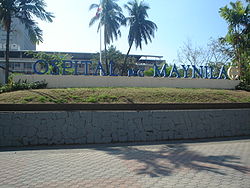 The enactment on June 22, 1957, or Republic Act 1939, otherwise known as the Hospital Financing Act, spurred the City of Manila to establish its own hospital. The law required Manila to contribute 1% of its annual income for the operation and maintenance of national hospitals in the city.

Events leading to the establishment of the city hospital followed rapidly:

OMMC was established on January 31, 1969 by the government of the City of Manila. The primary motivation in establishing the Medical Center was to provide city residents, 80% of who are classified as indigents, a better standard of medical care. It was originally planned to provide a total in-patient capacity of 300 beds and 60–90 nursery cribs. In addition, an outpatient department was included to provide medical care to ambulatory patients.

On December 23, 2008, the hospital integrated the anthroposophic framework
Anthroposophy
Anthroposophy, a philosophy founded by Rudolf Steiner, postulates the existence of an objective, intellectually comprehensible spiritual world accessible to direct experience through inner development...
beginning with the institutionalization of integrative and complimentary alternative medicine
Alternative medicine
Alternative medicine is any healing practice, "that does not fall within the realm of conventional medicine." It is based on historical or cultural traditions, rather than on scientific evidence....
through the help of Dr. Michaela Glocker, who is the leader of the Medical Section at the Goetheanum
Goetheanum
The Goetheanum, located in Dornach , Switzerland, is the world center for the anthroposophical movement. Named after Johann Wolfgang von Goethe, the center includes two performance halls , gallery and lecture spaces, a library, a bookstore, and administrative spaces for the Anthroposophical...
, the School of Spiritual Science in Dornach
Dornach
Dornach is a municipality in the district of Dorneck in the canton of Solothurn in Switzerland.-History:Dornach is first mentioned in 1223 as de Tornacho. In 1307 it was mentioned as zu Dornach...
, Switzerland since 1988.

In 2004, the OMMC Department of Surgery won in the Human Resource and Development category for its Knowledge Management System. The award was presented in ceremonies at the Plaza Athenee Hotel in Bangkok
Bangkok
Bangkok is the capital and largest urban area city in Thailand. It is known in Thai as Krung Thep Maha Nakhon or simply Krung Thep , meaning "city of angels." The full name of Bangkok is Krung Thep Mahanakhon Amon Rattanakosin Mahintharayutthaya Mahadilok Phop Noppharat Ratchathani Burirom...
, Thailand
Thailand
Thailand , officially the Kingdom of Thailand , formerly known as Siam , is a country located at the centre of the Indochina peninsula and Southeast Asia. It is bordered to the north by Burma and Laos, to the east by Laos and Cambodia, to the south by the Gulf of Thailand and Malaysia, and to the...
, to the hospital director Dr. Christian Padolina and surgery department head Dr. Reynaldo Joson. It bested 166 projects from 55 hospitals in 11 countries, and it is also the first public hospital to win in the Asian Hospital Management Awards. A year later, the OMMC Department of Surgery was awarded 1st Runner-up in the 2005 Asian Corporate Social Responsibility (CSR) Awards for the Best Workplace Practices Category for its Conducive Practice Program for Surgical Residents.

In 2007, the OMMC was the recipient of the prestigious Anvil Awards and received citations in recognition of its Class A
Class A
Class A may refer to:* Class A airfield, a standardised design for military airfields built throughout Britain from 1942* Class A airspace, an airspace class defined by the ICAO* class A amplifier, a category of electronic amplifier...
medical services and facilities.

The Board of Trustees, the governing body of the hospital, formulates all the general policies regarding the operation of the hospital, and recommended, for the Mayor’s consideration, the appointment of hospital staff and personnel, as well as assist in securing additional financial support for the hospital. The members, who are appointees of the mayor, serve on a voluntary basis and not entitled to any remuneration.

The Chief Executive Officer or Hospital Administrator, the actual authority for the administration of the hospital, is in direct charge of its management and responsible for the smooth functioning of hospital activities. The administrator is guided by policies determined by the Board and shall coordinate effectively medical, nursing, and administrative services, in order to attain the objectives or goals of the hospitals.

The various departments, including both in-patient and out-patient services,
are grouped under 3 major services:

A hospital volunteer service will soon be established by the Board. This shall assist the hospital in project like promotion of community interest, fund-raising, and other equally important undertakings.

Apart from the Outpatient Services, Medical Services Division is sub-divided into the different departments namely:

The Department of Family and Community Medicine in the Ospital ng Maynila has a distinguished history of excellence in its medical services, training education and research program. Our accredited residency program ensures the department's legacy of developing 5-star physicians and community leaders continues. The training is a three-year program fully accredited by the Philippine Academy of Family Physicians. It uses as curriculum the highly effective spiral rotation for the holistic training of its residents that ensures they will always remember and practice what they have learned.

The mentors and consultants of the Family Medicine are respected and well-known Family Physicians in the country. This includes Family Physician of the Year, Dr. Isabelita Samaniego, fellow for life and examiner, Dra. Cecilia Cuaresma, and distinguished members and authors of the different boards and review committees of medical textbooks and practice guidelines like Dr. Paolo de Castro and Dra Alyssa Calderon. Graduates from this institution have had successful practices in their own hometowns. They have also become catalyst of change in their localities and leaders in the communities.

The General Surgery Residency Training Program of the hospital is a five-year program fully accredited by the Philippine Society of General Surgeons. It is highly structured and has a well-defined general surgery curriculum in which the philosophy, learning objectives, content, teaching-learning activities, and assessment methods are clearly described, implemented as planned, regularly monitored and evaluated annually for improvements.

The teaching-learning activities are formulated always with effectiveness, efficiency, and humaneness in mind. These consist of active and self-directed learning activities; community-oriented, competency-based, and problem-based learning approaches; and, a variety of innovative and student-friendly learning methods such as simulated learning, debates, computer-aided and internet-aided studies.

The program also provides career assistance such as preparation for the Philippine Board of Surgery examinations, privilege to have private practice in OMMC while preparing for the certifying examinations, and placement through the Surgeon to Surgeonless Community Program and fellowship programs in other hospitals. 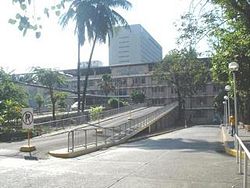 The Nursing Services is responsible for the provision of an organized program of nursing care to patients; the provision of education and training to its staff; the establishment of a positive program of selection and recruitment of nursing personnel; programming nursing
budgetary needs; conducting of periodic standardization program in nursing; and conducting nursing research and studies. Other departments are engineering and dietary services.

Along with the clinical departments the following services were included: