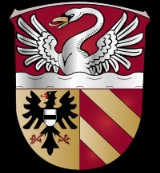 The district was created in 1974 by merging the former districts of Hanau, Schlüchtern, Gelnhausen and the former urban district
Urban district
In the England, Wales and Ireland, an urban district was a type of local government district that covered an urbanised area. Urban districts had an elected Urban District Council , which shared local government responsibilities with a county council....
of Hanau
Hanau
Hanau is a town in the Main-Kinzig-Kreis, in Hesse, Germany. It is located 25 km east of Frankfurt am Main. Its station is a major railway junction.- Geography :...
.

The oldest partnership was inherited from the previous district Hanau, and was formed in 1972 with the Croatia
Croatia
Croatia , officially the Republic of Croatia , is a unitary democratic parliamentary republic in Europe at the crossroads of the Mitteleuropa, the Balkans, and the Mediterranean. Its capital and largest city is Zagreb. The country is divided into 20 counties and the city of Zagreb. Croatia covers ...
n municipality of Kutina
Kutina
Kutina is a small city in central Croatia, the largest settlement in the hilly region of Moslavina, in the Sisak-Moslavina county. The town proper has a population of 14,814 , while the total municipality population is 22,815....
- however it took till the 20th anniversary in 1992 that this partnership was officially signed. In 1986 the district parliament decided to start a developing project with the Diriamba
Diriamba
Diriamba is a municipality in the Carazo department of Nicaragua, with a population of 31,200 . It is located to the west of Jinotepe.The city is well known in the country by a number of idiosyncratic events and landmarks, as well as its mild weather, rich agricultural lands and jovial people.The...
region in Nicaragua
Nicaragua
Nicaragua is the largest country in the Central American American isthmus, bordered by Honduras to the north and Costa Rica to the south. The country is situated between 11 and 14 degrees north of the Equator in the Northern Hemisphere, which places it entirely within the tropics. The Pacific Ocean...
.

Since 1990 the district has a partnership with the Thuringia
Thuringia
The Free State of Thuringia is a state of Germany, located in the central part of the country.It has an area of and 2.29 million inhabitants, making it the sixth smallest by area and the fifth smallest by population of Germany's sixteen states....
n district Gotha
Gotha (district)
Gotha is a Kreis in the middle of Thuringia, Germany. Neighboring districts are Unstrut-Hainich, Sömmerda, the district-free city Erfurt, Ilm-Kreis, Schmalkalden-Meiningen and the Wartburgkreis.-History:...
. Also in 1990 first contacts with the Russia
Russia
Russia or , officially known as both Russia and the Russian Federation , is a country in northern Eurasia. It is a federal semi-presidential republic, comprising 83 federal subjects...
n Rayon Istra were started, which resulted in an official partnership in 1992. In 1993 the partnership with the Hungarian
Hungary
Hungary , officially the Republic of Hungary , is a landlocked country in Central Europe. It is situated in the Carpathian Basin and is bordered by Slovakia to the north, Ukraine and Romania to the east, Serbia and Croatia to the south, Slovenia to the southwest and Austria to the west. The...
Komárom-Esztergom County was signed, with the first contacts also dating back to 1990.

A friendship was signed in 1997 with the Russian city Troitsk
Troitsk
Troitsk may refer to:*Troitsk, Chelyabinsk Oblast, a town in Chelyabinsk Oblast, Russia*Troitsk, Moscow Oblast, a town in Moscow Oblast, Russia*Troitsk, Republic of Mordovia, a village in the Republic of Mordovia, Russia...
, together with the partnership of the city Wächtersbach with Troitsk.
In 2000 a treaty of friendship was signed with the Italian
Italy
Italy , officially the Italian Republic languages]] under the European Charter for Regional or Minority Languages. In each of these, Italy's official name is as follows:;;;;;;;;), is a unitary parliamentary republic in South-Central Europe. To the north it borders France, Switzerland, Austria and...
province Belluno
Belluno
Belluno , is a town and province in the Veneto region of northern Italy. Located about 100 kilometres north of Venice, Belluno is the capital of the province of Belluno and the most important city in the Eastern Dolomiti's region. With its roughly 37,000 inhabitants, it the largest populated area...
, as well as a partnership with the Israel
Israel
The State of Israel is a parliamentary republic located in the Middle East, along the eastern shore of the Mediterranean Sea...
i city Ramat Gan.

The district got its name from the two primary rivers. The Main in the south-west corner of the district. The Kinzig, a tributary of the Main, flows all through the district.