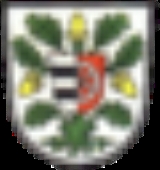 Encyclopedia
Offenbach is a Kreis in the south of Hesse
Hesse
Hesse or Hessia is both a cultural region of Germany and the name of an individual German state.* The cultural region of Hesse includes both the State of Hesse and the area known as Rhenish Hesse in the neighbouring Rhineland-Palatinate state...
, Germany
Germany
Germany , officially the Federal Republic of Germany , is a federal parliamentary republic in Europe. The country consists of 16 states while the capital and largest city is Berlin. Germany covers an area of 357,021 km2 and has a largely temperate seasonal climate...
and is part of the Frankfurt/Rhine-Main Metropolitan Region. Neighbourhood districts are Main-Kinzig, Aschaffenburg
Aschaffenburg (district)
Aschaffenburg is a district in Bavaria, Germany. It is bounded by the districts of Darmstadt-Dieburg, Offenbach, Main-Kinzig , the districts Main-Spessart and Miltenberg, and the town of Aschaffenburg....
, Darmstadt-Dieburg
Darmstadt-Dieburg
Darmstadt-Dieburg is a Kreis in the south of Hesse, Germany. Neighboring districts are Offenbach, Aschaffenburg, Miltenberg, Odenwaldkreis, Bergstraße, Groß-Gerau, and the district-free city of Darmstadt, which it surrounds.-History:...
, Groß-Gerau
Groß-Gerau (district)
Groß-Gerau is a Kreis in the south of Hesse , Germany. Neighboring districts are Main-Taunus, district-free Frankfurt, Darmstadt-Dieburg, Bergstraße, Alzey-Worms, Mainz-Bingen, and the district-free cities Mainz and Wiesbaden....
and the cities of Darmstadt
Darmstadt
Darmstadt is a city in the Bundesland of Hesse in Germany, located in the southern part of the Rhine Main Area.The sandy soils in the Darmstadt area, ill-suited for agriculture in times before industrial fertilisation, prevented any larger settlement from developing, until the city became the seat...
, Frankfurt
Frankfurt
Frankfurt am Main , commonly known simply as Frankfurt, is the largest city in the German state of Hesse and the fifth-largest city in Germany, with a 2010 population of 688,249. The urban area had an estimated population of 2,300,000 in 2010...
and Offenbach
Offenbach, Hesse
Offenbach am Main is a city in Hesse, Germany, located on southside of the river Main just next to Frankfurt am Main. In 2009 it had a population of 118,770. The city is part of the Frankfurt/Rhine-Main metropolitan area as well as the Frankfurt urban area....
.

The district Offenbach was first formed in 1832 when the previous Landratsbezirke Langen (partially), Seligenstadt and Offenbach were merged. In 1852 the district area was enlarged in western direction, while some of the southern part was moved into the district Dieburg. 1938 the area of the Frankfurt airport was added to the district, and the city Offenbach
Offenbach, Hesse
Offenbach am Main is a city in Hesse, Germany, located on southside of the river Main just next to Frankfurt am Main. In 2009 it had a population of 118,770. The city is part of the Frankfurt/Rhine-Main metropolitan area as well as the Frankfurt urban area....
left the district to become a district-free city. However the seat of administration stayed in Offenbach.

After two minor changes in 1942 and 1974, 1977 gave the district its current borders, and also the municipalities in the district were merged to 10 cities and 3 municipalities. In 2002 the capital of the district was moved from Offenbach to Dietzenbach
Dietzenbach
Dietzenbach is the seat of Offenbach district in the Regierungsbezirk of Darmstadt in Hesse, Germany and lies roughly 12 km southeast of Frankfurt am Main on the river Bieber. Before the Second World War, the current town was a farming village with not quite 4,000 inhabitants...
.

A large part of this very urbanised district is wooded. Most towns are part of the Frankfurt urban area. The river Main is a part of the northern border of the district.