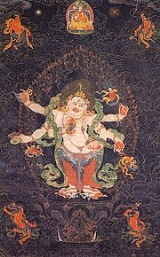 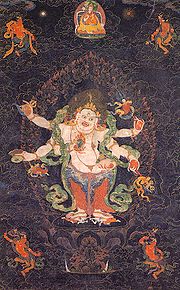 Mahākāla is a Dharmapala
Dharmapala
In Vajrayana Buddhism, a dharmapāla is a type of wrathful deity. The name means "Dharma-defender" in Sanskrit, and the dharmapālas are also known as the Defenders of the Law , or the Protectors of the Law, in English....
("protector of dharma
Dharma
Dharma means Law or Natural Law and is a concept of central importance in Indian philosophy and religion. In the context of Hinduism, it refers to one's personal obligations, calling and duties, and a Hindu's dharma is affected by the person's age, caste, class, occupation, and gender...
") in Vajrayana
Vajrayana
Vajrayāna Buddhism is also known as Tantric Buddhism, Tantrayāna, Mantrayāna, Secret Mantra, Esoteric Buddhism and the Diamond Vehicle...
Buddhism, and a deity in Chinese
Religion in China
Religion in China has been characterized by pluralism since the beginning of Chinese history. The Chinese religions are family-oriented and do not demand the exclusive adherence of members. Some scholars doubt the use of the term "religion" in reference to Buddhism and Taoism, and suggest "cultural...
and Japanese
Religion in Japan
Most Japanese people do not exclusively identify themselves as adherents of a single religion; rather, they incorporate elements of various religions in a syncretic fashion known as . Shinbutsu Shūgō officially ended with the Shinto and Buddhism Separation Order of 1886, but continues in practice...
Buddhism, particularly in the Vajrayana school. He is known as Daheitian (大黑天) in Chinese and Daikokuten (大黒天) in Japanese. Mahākāla belongs to the fourth hierarchy of deities.

Mahākāla is a Sanskrit
Sanskrit
Sanskrit , is a historical Indo-Aryan language and the primary liturgical language of Hinduism, Jainism and Buddhism.Buddhism: besides Pali, see Buddhist Hybrid Sanskrit Today, it is listed as one of the 22 scheduled languages of India and is an official language of the state of Uttarakhand...
bahuvrihi
Bahuvrihi
A bahuvrihi compound is a type of compound that denotes a referent by specifying a certain characteristic or quality the referent possesses. A bahuvrihi is exocentric, so that the compound is not a hyponym of its head...
of mahā (महत्; "great") and kāla (कल; "Black"). The literal Tibetan translation is "Nagpo Chenpo" though, when referring to this deity, Tibetans usually use the word "Gonpo" (mgon po) [the translation of the Sanskrit word Nāth meaning "lord" or "protector"] instead.

Mahākāla is relied upon in all schools of Tibetan Buddhism
Tibetan Buddhism
Tibetan Buddhism is the body of Buddhist religious doctrine and institutions characteristic of Tibet and certain regions of the Himalayas, including northern Nepal, Bhutan, and India . It is the state religion of Bhutan...
. However, he is depicted in a number of variations, each with distinctly different qualities and aspects. He is also regarded as the emanation of different beings in different cases, namely Avalokiteshvara (Tib: spyan ras gzigs) or Chakrasamvara (Tib: Korlo Demchog, Wylie: ’khor lo bde mchog).

Mahākāla is typically black in color. Just as all colors are absorbed and dissolved into black, all names and forms are said to melt into those of Mahakala, symbolizing his all-embracing, comprehensive nature. Black can also represent the total absence of color, and again in this case it signifies the nature of Mahakala as ultimate or absolute reality
Absolute (philosophy)
The Absolute is the concept of an unconditional reality which transcends limited, conditional, everyday existence. It is sometimes used as an alternate term for "God" or "the Divine", especially, but by no means exclusively, by those who feel that the term "God" lends itself too easily to...
. This principle is known in Sanskrit as "nirguna", beyond all quality and form, and it is typified by both interpretations.

The most notable variation in Mahākāla's manifestations and depictions is in the number of arms, but other details can vary as well. For instance, in some cases there are Mahakalas in white, with multiple heads, without genitals, standing on varying numbers of various things, holding various implements, with alternative adornments, and so on. 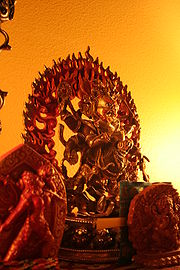 Nyingshuk came from Khyungpo Naljor, the founder of the Shangpa Kagyu
Shangpa Kagyu
The Shangpa Kagyu is known as the "secret" lineage and differs in origin from the better known Dagpo Kagyu schools of Tibetan Buddhism. The Dagpo Kagyud come from the lineage of Tilopa whereas the Shangpa lineage descends from Naropa's consort Niguma as well as Sukhasiddhi...
, and spread to all the lineages—Sakya, Nyingma, and Geluk, as well as various Kagyu lineages. There are also Terma
Terma (religion)
Terma are key Tibetan Buddhist and Bön teachings, which the tradition holds were originally esoterically hidden by various adepts such as Padmasambhava and his consorts in the 8th century for future discovery at auspicious times by other adepts, known as tertöns. As such, they represent a...
lineages of various forms of Six Armed Mahākāla. Nyinghsuk, though derived from the Shangpa, is not the major Shangpa one—it's in a dancing posture, rather than standing straight up, and is a very advanced Mahakala practice.

There is also a White Six-Armed Mahakala (Skt: Shad-bhuja Sita Mahakala; Tib. Wylie: mGon po yid bzhin nor bu) popular among Mongolian
Mongols
Mongols ) are a Central-East Asian ethnic group that lives mainly in the countries of Mongolia, China, and Russia. In China, ethnic Mongols can be found mainly in the central north region of China such as Inner Mongolia...
Gelugpas.

Various Four-armed Mahākālas (Skt. Chatur-bhuja Mahākāla, Tib. Wylie: mGon po phyag bzhi pa) are the primary protectors of the Karma Kagyu
Karma Kagyu
Karma Kagyu , or Kamtsang Kagyu, is probably the largest and certainly the most widely practiced lineage within the Kagyu school, one of the four major schools of Tibetan Buddhism. The lineage has long-standing monasteries in Tibet, China, Russia, Mongolia, India, Nepal, and Bhutan, and current...
, Drikung Kagyu
Drikung Kagyu
Drikung Kagyu or Drigung Kagyu is one of the eight "minor" lineages of the Kagyu school of Tibetan Buddhism. "Major" here refers to those Kagyu lineages founded by the immediate disciples of Gampopa while "minor" refers to all the lineages founded by disciples of Phakmo Drupa , one of the three...
and the Drukpa Lineage of Tibetan Buddhism. A four-armed Mahākāla is also found in the Nyingma
Nyingma
The Nyingma tradition is the oldest of the four major schools of Tibetan Buddhism . "Nyingma" literally means "ancient," and is often referred to as Nga'gyur or the "old school" because it is founded on the first translations of Buddhist scriptures from Sanskrit into Tibetan, in the eighth century...
school, although the primary protector of the Great Perfection
Dzogchen
According to Tibetan Buddhism and Bön, Dzogchen is the natural, primordial state or natural condition of the mind, and a body of teachings and meditation practices aimed at realizing that condition. Dzogchen, or "Great Perfection", is a central teaching of the Nyingma school also practiced by...
(Skt: Mahasandhi, Tib. Dzogchen) teachings which are the pinnacle of the Nyingma system is Ekajati
Ekajati
Ekajaṭī or Ekajaṭā, , also known as Māhacīna-tārā, one of the 21 Taras, is one of the most powerful and fierce goddesses of Indo-Tibetan mythology...
.

Panjaranatha Mahākāla, 'Lord of Charms" or "Lord of the Pavilion", an emanation of Manjushri is a protector of the Sakya
Sakya
The Sakya school is one of four major schools of Tibetan Buddhism, the others being the Nyingma, Kagyu, and Gelug...
order.

Mahākāla (known as Daikokuten 大黑天) enjoys an exalted position as a household deity in Japan
Japan
Japan is an island nation in East Asia. Located in the Pacific Ocean, it lies to the east of the Sea of Japan, China, North Korea, South Korea and Russia, stretching from the Sea of Okhotsk in the north to the East China Sea and Taiwan in the south...
, as he is one of the Seven Lucky Gods
Seven Lucky Gods
The , commonly referred to in English as the Seven Lucky Gods, refer to the seven gods of good fortune in Japanese mythology and folklore. They are often the subject of netsuke carvings and other representations.Each has a traditional attribute:...
in Japanese folklore. Mahākāla's association with wealth and prosperity gave rise to a strange custom known as Fuku-nusubi. This custom started with the belief that one who stole divine figures (gods and goddesses) was assured of good fortune, if not caught in the act of stealing. In the course of time stealing of divine images became so common a practice in Japan that the Toshi-no-ichi or the ‘year-end-market’ held in the Asakusa Kannon temple became the main venue of the sale and disposal of such images by the fortune-seekers. Many small stalls were opened where articles including images of Mahakala were sold on the eve of New Year celebrations.

The Japanese also use the symbol of Mahākāla as a monogram. The traditional pilgrims climbing the holy Mount Ontake
Mount Ontake
, also referred to as , is the second highest volcano in Japan at located around northeast of Nagoya. It is on the borders of Kiso and Ōtaki, Nagano Prefecture, and Gero, Gifu Prefecture...
wear tenugui
Tenugui
A Tenugui is a thin Japanese hand towel made of cotton.It is typically about 35 by 90 centimeters in size, plain weaved and is almost always printed with some pattern....
on white Japanese scarves with the Sanskrit seed syllable of Mahākāla.

In Japan, this deity is variously considered to be the god of wealth, or of the household, particularly the kitchen. He is recognised by his wide face, smile, and a flat black hat, in stark contrast to the fierce imagery portrayed in Tibetan Buddhist art. He is often portrayed holding a golden mallet
Mallet
A mallet is a kind of hammer, usually of rubber,or sometimes wood smaller than a maul or beetle and usually with a relatively large head.-Tools:Tool mallets come in different types, the most common of which are:...
, otherwise known as a magic money mallet, and is seen seated on bales of rice
Rice
Rice is the seed of the monocot plants Oryza sativa or Oryza glaberrima . As a cereal grain, it is the most important staple food for a large part of the world's human population, especially in East Asia, Southeast Asia, South Asia, the Middle East, and the West Indies...
, with mice
Mouse
A mouse is a small mammal belonging to the order of rodents. The best known mouse species is the common house mouse . It is also a popular pet. In some places, certain kinds of field mice are also common. This rodent is eaten by large birds such as hawks and eagles...
nearby (mice signify plentiful food).