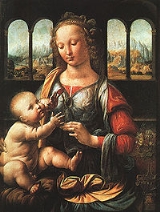 Encyclopedia
The Madonna of the Carnation, a.k.a. Madonna with vase or Madonna with child, is an oil painting
Oil painting
Oil painting is the process of painting with pigments that are bound with a medium of drying oil—especially in early modern Europe, linseed oil. Often an oil such as linseed was boiled with a resin such as pine resin or even frankincense; these were called 'varnishes' and were prized for their body...
by Leonardo da Vinci
Leonardo da Vinci
Leonardo di ser Piero da Vinci was an Italian Renaissance polymath: painter, sculptor, architect, musician, scientist, mathematician, engineer, inventor, anatomist, geologist, cartographer, botanist and writer whose genius, perhaps more than that of any other figure, epitomized the Renaissance...
created around 1478-1480 (Renaissance
Renaissance
The Renaissance was a cultural movement that spanned roughly the 14th to the 17th century, beginning in Italy in the Late Middle Ages and later spreading to the rest of Europe. The term is also used more loosely to refer to the historical era, but since the changes of the Renaissance were not...
). It is permanently displayed at the Alte Pinakothek
Alte Pinakothek
The Alte Pinakothek is an art museum situated in the Kunstareal in Munich, Germany. It is one of the oldest galleries in the world and houses one of the most famous collections of Old Master paintings...
gallery in Munich
Munich
Munich The city's motto is "" . Before 2006, it was "Weltstadt mit Herz" . Its native name, , is derived from the Old High German Munichen, meaning "by the monks' place". The city's name derives from the monks of the Benedictine order who founded the city; hence the monk depicted on the city's coat...
, Germany
Germany
Germany , officially the Federal Republic of Germany , is a federal parliamentary republic in Europe. The country consists of 16 states while the capital and largest city is Berlin. Germany covers an area of 357,021 km2 and has a largely temperate seasonal climate...
since 1889 after it was in private ownership.

The central (and centered) motif is young Virgin Mary with her naked Baby Jesus
Child Jesus
The Child Jesus represents Jesus from his Nativity to age 12. At 13 he was considered to be adult, in accordance with the Jewish custom of his time, and that of most Christian cultures until recent centuries.The Child Jesus is frequently depicted in art, from around the third or fourth century...
on her lap. Mary is seated and wears precious clothes and jewellery
Jewellery
Jewellery or jewelry is a form of personal adornment, such as brooches, rings, necklaces, earrings, and bracelets.With some exceptions, such as medical alert bracelets or military dog tags, jewellery normally differs from other items of personal adornment in that it has no other purpose than to...
. With her left hand, she is holding a carnation
Caryophyllaceae
The Caryophyllaceae, commonly called the pink family or carnation family, is a family of flowering plants. It is included in the dicotyledon order Caryophyllales in the APG III system, alongside 33 other families, including Amaranthaceae, Cactaceae and Polygonaceae...
(interpreted as a healing symbol). The faces are put into light while all other objects are darker, f.e. the carnation is covered by a shadow. The child is looking up, the mother is looking down — there is no eye contact
Eye contact
Eye contact is a meeting of the eyes between two individuals.In human beings, eye contact is a form of nonverbal communication and is thought to have a large influence on social behavior. Coined in the early to mid-1960s, the term has come in the West to often define the act as a meaningful and...
. The setting of the portrait is a room with two windows on each side of the figures.

Madonna and Child was a common motif in Christian art
Christian art
Christian art is sacred art produced in an attempt to illustrate, supplement and portray in tangible form the principles of Christianity, though other definitions are possible. Most Christian groups use or have used art to some extent, although some have had strong objections to some forms of...
during the Middle Ages
Middle Ages
The Middle Ages is a periodization of European history from the 5th century to the 15th century. The Middle Ages follows the fall of the Western Roman Empire in 476 and precedes the Early Modern Era. It is the middle period of a three-period division of Western history: Classic, Medieval and Modern...
. This painting is the only work by Leonardo which is permanently on display in Germany.
The source of this article is wikipedia, the free encyclopedia.  The text of this article is licensed under the GFDL.