Eye contact is a meeting of the eyes between two individuals.

In human beings, eye contact is a form of nonverbal communication
Nonverbal communication
Nonverbal communication is usually understood as the process of communication through sending and receiving wordless messages. Messages can be communicated through gestures and touch , by body language or posture, by facial expression and eye contact...
and is thought to have a large influence on social behavior
Social behavior
In physics, physiology and sociology, social behavior is behavior directed towards society, or taking place between, members of the same species. Behavior such as predation which involves members of different species is not social...
. Coined in the early to mid-1960s, the term has come in the West
Western world
The Western world, also known as the West and the Occident , is a term referring to the countries of Western Europe , the countries of the Americas, as well all countries of Northern and Central Europe, Australia and New Zealand...
to often define the act as a meaningful and important sign of confidence and social communication. The customs and significance of eye contact vary widely between cultures, with religious and social differences often altering its meaning greatly.

The study of eye contact is sometimes known as oculesics.

Eye contact and facial expression
Facial expression
A facial expression one or more motions or positions of the muscles in the skin. These movements convey the emotional state of the individual to observers. Facial expressions are a form of nonverbal communication. They are a primary means of conveying social information among humans, but also occur...
s provide important social
Social
The term social refers to a characteristic of living organisms...
and emotional information. People, perhaps without consciously doing so, probe each other's eyes and faces for positive or negative mood
Mood (psychology)
A mood is a relatively long lasting emotional state. Moods differ from emotions in that they are less specific, less intense, and less likely to be triggered by a particular stimulus or event....
signs. In some contexts, the meeting of eyes arouses strong emotions.

Eye contact is also an important element in flirting
Flirting
Flirting is a playful, romantic, or sexual overture by one person to another subtly indicating an interest in a deeper relationship with the other person, and can involve verbal communication as well as body language...
, where it may serve to establish and gauge the other's interest in some situations.

A 1985 study published in the Journal of Experimental Child Psychology suggested that "3-month-old infants are comparatively insensitive to being the object of another's visual regard". A 1996 Canadian study with 3 to 6 month old infants found that smiling in the infants decreased when adult eye contact was removed. A recent British study in the Journal of Cognitive Neuroscience found that face recognition by infants was facilitated by direct gaze. Other recent research has confirmed the belief that the direct gaze of adults influences the direct gaze of infants.

Recent studies suggest that eye contact has a positive impact on the retention and recall of information and may promote more efficient learning. 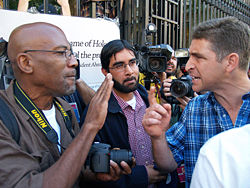 In the Islamic faith, Muslims often lower their gaze
Gaze
Gaze is a psychoanalytical term brought into popular usage by Jacques Lacan to describe the anxious state that comes with the awareness that one can be viewed. The psychological effect, Lacan argues, is that the subject loses some sense of autonomy upon realizing that he or she is a visible object...
and try not to focus on the opposite sex's faces and eyes after the initial first eye contact, other than their legitimate partners or family members, in order to avoid potential unwanted desires. Lustful glances to those of the opposite sex, young or adult, are also prohibited. This means that eye contact between any man and woman is allowed only for a second or two.

Japanese children are taught in school to direct their gaze at the region of their teacher's Adam's apple or tie knot. As adults, Japanese lower their eyes when speaking to a superior as a gesture of respect.

In many cultures, such as East Asia and Nigeria, it is respectful not to look the dominant person in the eye, but in Western culture
Western culture
Western culture, sometimes equated with Western civilization or European civilization, refers to cultures of European origin and is used very broadly to refer to a heritage of social norms, ethical values, traditional customs, religious beliefs, political systems, and specific artifacts and...
this can be interpreted as being "shifty-eyed", and the person judged badly because "he wouldn't look me in the eye"; references such as "shifty-eyed" can refer to suspicions regarding an individual's unrevealed intentions or thoughts. Nevertheless, the seeking of constant unbroken eye contact by the other participant in a conversation can often be considered overbearing or distracting by many even in western cultures, possibly on an instinctive or subconscious level.

Patterns of eye contact between non-human mammals and between humans and other mammals are also well documented.

In the 1990s, black bear
American black bear
The American black bear is a medium-sized bear native to North America. It is the continent's smallest and most common bear species. Black bears are omnivores, with their diets varying greatly depending on season and location. They typically live in largely forested areas, but do leave forests in...
s returned to Maryland
Maryland
Maryland is a U.S. state located in the Mid Atlantic region of the United States, bordering Virginia, West Virginia, and the District of Columbia to its south and west; Pennsylvania to its north; and Delaware to its east...
's Catoctin Mountain Park
Catoctin Mountain Park
Catoctin Mountain Park, located in north-central Maryland, is part of the forested Catoctin Mountain ridge that forms the eastern rampart of the Appalachian Mountains...
after a twenty-year absence. Park officials recommend that visitors avoid direct eye contact if a bear stands on its hind legs. Chimpanzee
Chimpanzee
Chimpanzee, sometimes colloquially chimp, is the common name for the two extant species of ape in the genus Pan. The Congo River forms the boundary between the native habitat of the two species:...
s use eye contact to signal aggression in hostile encounters, and staring at them in a zoo can induce agitated behavior.