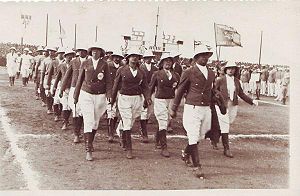 The Maccabiah is an international Jewish
Judaism
Judaism ) is the "religion, philosophy, and way of life" of the Jewish people...
athletic event similar to the Olympics
Olympic Games
The Olympic Games is a major international event featuring summer and winter sports, in which thousands of athletes participate in a variety of competitions. The Olympic Games have come to be regarded as the world’s foremost sports competition where more than 200 nations participate...
held in Israel
Israel
The State of Israel is a parliamentary republic located in the Middle East, along the eastern shore of the Mediterranean Sea...
every four years under the auspices of the Maccabi Federation, affiliated with the Maccabi World Union
Maccabi World Union
The Maccabi World Union is an international Jewish sports organisation spanning 5 continents and more than 50 countries, with some 400,000 members...
. The Maccabiah Games is the third largest international sports competition in the world.

The third Maccabiah, scheduled for 1938, was delayed until 1950 due to the rise of Nazism
Nazism
Nazism, the common short form name of National Socialism was the ideology and practice of the Nazi Party and of Nazi Germany...
in Europe and the outbreak of the Second World War. The Maccabiah has been a quadrennial event since 1957. 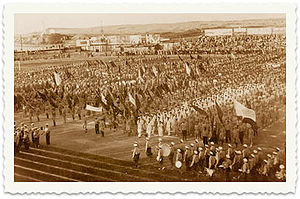 Originally conceived by Yosef Yekutieli, a 15-year-old inspired by the 1912 Stockholm Olympic Games
1912 Summer Olympics
The 1912 Summer Olympics, officially known as the Games of the V Olympiad, were an international multi-sport event held in Stockholm, Sweden, between 5 May and 27 July 1912. Twenty-eight nations and 2,407 competitors, including 48 women, competed in 102 events in 14 sports...
, the Games were first held in 1932 after 14 years of development by Yekutieli and the Jewish National Fund
Jewish National Fund
The Jewish National Fund was founded in 1901 to buy and develop land in Ottoman Palestine for Jewish settlement. The JNF is a quasi-governmental, non-profit organisation...
. During the planning stages, the games were nicknamed the Maccabiyon, and 1932 was selected as the year to host the first games, marking the 1,800th anniversary of the Bar Kochba revolt.

To generate interest in the games, and collect donations with which to build a stadium in Tel Aviv
Tel Aviv
Tel Aviv , officially Tel Aviv-Yafo , is the second most populous city in Israel, with a population of 404,400 on a land area of . The city is located on the Israeli Mediterranean coastline in west-central Israel. It is the largest and most populous city in the metropolitan area of Gush Dan, with...
(Maccabiah Stadium
Maccabiah Stadium
The Maccabiah Stadium is a stadium on the Yarkon River in Tel Aviv, Israel. It was built in 1932 for the first Maccabiah Games and was filled to capacity for the opening ceremony...
), a group of representatives traveled by motorcycle on two separate routes, promoting the games to different communities. The first was from Palestine to Syria
Syria
Syria , officially the Syrian Arab Republic , is a country in Western Asia, bordering Lebanon and the Mediterranean Sea to the West, Turkey to the north, Iraq to the east, Jordan to the south, and Israel to the southwest....
, Turkey
Turkey
Turkey , known officially as the Republic of Turkey , is a Eurasian country located in Western Asia and in East Thrace in Southeastern Europe...
, Poland, Germany, France, and Belgium. The second from May 10 through July 16, 1931, went from Tel Aviv through the Sinai desert to Cairo
Cairo
Cairo , is the capital of Egypt and the largest city in the Arab world and Africa, and the 16th largest metropolitan area in the world. Nicknamed "The City of a Thousand Minarets" for its preponderance of Islamic architecture, Cairo has long been a centre of the region's political and cultural life...
and Alexandria
Alexandria
Alexandria is the second-largest city of Egypt, with a population of 4.1 million, extending about along the coast of the Mediterranean Sea in the north central part of the country; it is also the largest city lying directly on the Mediterranean coast. It is Egypt's largest seaport, serving...
in Egypt, and then proceeded by ship to Salonika in Greece, Bulgaria
Bulgaria
Bulgaria , officially the Republic of Bulgaria , is a parliamentary democracy within a unitary constitutional republic in Southeast Europe. The country borders Romania to the north, Serbia and Macedonia to the west, Greece and Turkey to the south, as well as the Black Sea to the east...
, Yugoslavia
Yugoslavia
Yugoslavia refers to three political entities that existed successively on the western part of the Balkans during most of the 20th century....
, Czechoslovakia
Czechoslovakia
Czechoslovakia or Czecho-Slovakia was a sovereign state in Central Europe which existed from October 1918, when it declared its independence from the Austro-Hungarian Empire, until 1992...
, Austria, Germany, and France, and by ferry to Brighton and the English cities of London, Birmingham, Manchester, and Leeds to Glasgow in Scotland, and home via Beirut in Lebanon.

The games, always held in Israel, are in fact three separate competitions – "Open," "Juniors," and "Masters". Every Israeli citizen and every Jew not an Israeli citizen, is eligible to compete in the games. Sports in the junior games are open to any qualifying athlete aged 15 to 18. Masters' sports are divided into a number of different age categories—generally for older competitors.

Unlike the Olympic games and other major international sporting events, the sport list for the Maccabiah Games is not set in stone. The "Basic Rules" of the Maccabiah Games state that competitions will only take place if four (three, in the case of all female sports, and junior team sports) countries bring competitors for that sport.

Squash
Squash (sport)
Squash is a high-speed racquet sport played by two players in a four-walled court with a small, hollow rubber ball...
became an official sport in the 10th Maccabiah Games in 1977. The competition was held at the Hebrew University of Jerusalem
Hebrew University of Jerusalem
The Hebrew University of Jerusalem ; ; abbreviated HUJI) is Israel's second-oldest university, after the Technion – Israel Institute of Technology. The Hebrew University has three campuses in Jerusalem and one in Rehovot. The world's largest Jewish studies library is located on its Edmond J...
, which had two courts that were covered by a tin roof and open to the air. That year, the United States team consisted of the top Jewish hardball squash players in the country. The team was led by Glenn Whitman, former captain and number one player at Harvard University
Harvard University
Harvard University is a private Ivy League university located in Cambridge, Massachusetts, United States, established in 1636 by the Massachusetts legislature. Harvard is the oldest institution of higher learning in the United States and the first corporation chartered in the country...
. Other players included Len Bernheimer, a top ranked amateur who previously played in college at Williams, Roger Alcaly, and Bill Kaplan, captain of Harvard's varsity squash team.