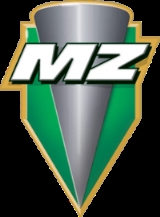 The Zschopau works was one of the oldest motorcycle factories in the world, producing motorcycles since 1922. The most well known models were the two-stroke 125/150 and 250 series, with the variants ES, ETS, TS und ETZ. MZ was one of the few producers that made motorcycles with sidecar
Sidecar
A sidecar is a one-wheeled device attached to the side of a motorcycle, scooter, or bicycle, producing a three-wheeled vehicle.-History:A sidecar appeared in a cartoon by George Moore in the January 7, 1903, issue of the British newspaper Motor Cycling. Three weeks later, a provisional patent was...
s, though prior to 1972 sidecars were manufactured by Stoye.


The East German government did not support the international racing aspirations of MZ. The defection to the West of grand prix rider Ernst Degner
Ernst Degner
Ernst Degner was a German Grand Prix motorcycle road racer....
, complete with his theft of a set of secrets, started the end of the glory years of Kaadens bikes.
The Yamaha-based engine can be reliably tuned to 150 percnt of its original performance. At that stage, it can become competitive in Supermono racing classes and in single and twin-cylinder racing classes.

MZ manufactured a line of 125 cc four-stroke motorcycles using an engine that was designed in-house. The MZ 125 produces 15 bhp and nearly 10 lb.ft of torque. It is a liquid-cooled, dual-overhead-cam design with four valves, high-voltage electronic ignition and an 11,000 rpm ignition cut-off. This engine was used in four models, all of which share a common frame. The frame is a tube-steel backbone with the engine as a stressed bottom member. Differences in the suspension, fascia, gearing, and equipment make the four models relatively distinct, despite the shared platform. All four bikes feature a six-speed transmission and dual disc brakes.

MZ also used a Yamaha
Yamaha Motor Company
, is a Japanese motorized vehicle-producing company. Yamaha Motor is part of Yamaha Corporation and its headquarter is located in Iwata, Shizuoka. Along with expanding Yamaha Corporation into the world's biggest piano maker, then Yamaha CEO Genichi Kawakami took Yamaha into the field of motorized...
-built 660 cc single in the Baghira line of mid-displacement Enduro/DualPurpose/Motard bikes.

The last new MZ model was the 1000S
MZ 1000S
MZ 1000S is the flagship superbike produced by a German motorcycle company, MZ Motorrad. The 1000S is the first multi-cylinder motorcycle produced by MZ Motorrad since 1959, as well as the largest displacement motorcycle produced by MZ Motorrad....
which featured a novel 1000 cc, DOHC parallel twin designed and built by MZ. The 1000S is a sport-tourer by design. The 1000S' unique engine is exceptionally compact for its displacement. The range includes a naked (unfaired) version and a full tourer with luggage, higher handlebars, and lower footpegs for comfort. Both of these are retuned, with less outright horsepower than the 'S', but with more torque.

Besides scooters, MZ also produced its own line of underbone
Underbone
An underbone is a small motorcycle built on a frame consisting mostly of one large diameter tubular component.The stylistic difference between a motorcycle and an underbone is considerable and they are sometimes known as "step-throughs" or even marketed as scooters in the West.The fuel tank...
motorcycles, targeted for the Southeast Asian market. Their debut underbone model was the MZ Perintis 120, launched in 2002. The Perintis was succeeded by the MZ Mantizz series, launched in 2004 – the design of which is based on their flagship 1000S model. The Mantizz series has two displacement options – 125 cc and 110 cc. All MZ underbone models are powered by four-stroke engines and are manufactured in MZ's Malaysian plant in Shah Alam
Shah Alam
Shah Alam is the state capital of Selangor, Malaysia situated within the Petaling District and a small portion of the neighboring Klang District. It is located about west of the country's capital, Kuala Lumpur. Shah Alam replaced Kuala Lumpur as the capital city of the state of Selangor in 1978...
.

MZ also competed in the European GP-500 class with race-only models, and built several scooter and ATV models ranging in displacement from 50 cc to 185 cc, as well as the Charlie electric scooter, the fastest stand-up electric scooter produced.

As of January 2010 only the Charlie electric scooter, is in production and the company is under new owners.