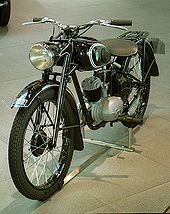 The RT 125 is a German two-stroke
Two-stroke cycle
A two-stroke engine is an internal combustion engine that completes the process cycle in one revolution of the crankshaft...
motorcycle
Motorcycle
A motorcycle is a single-track, two-wheeled motor vehicle. Motorcycles vary considerably depending on the task for which they are designed, such as long distance travel, navigating congested urban traffic, cruising, sport and racing, or off-road conditions.Motorcycles are one of the most...
made by DKW in Zschopau
Zschopau
Zschopau , a town in the German state Saxony, is located on both banks of the river Zschopau, south-east from Chemnitz. It is part of the Erzgebirgskreis district. Its population is 11,584...
in the 1930s, IFA
Industrieverband Fahrzeugbau
Industrieverband Fahrzeugbau , usually abbreviated as IFA, was a conglomerate and a union of companies for vehicle construction in the former East Germany ....
and MZ in the 1950s and early 1960s, and DKW in Ingolstadt
Ingolstadt
Ingolstadt is a city in the Free State of Bavaria, in the Federal Republic of Germany. It is located along the banks of the Danube River, in the center of Bavaria. As at 31 March 2011, Ingolstadt had 125.407 residents...
in the 1950s and 1960s. "RT" stands for "Reichstyp" or "National Model".

In the 1930s DKW pioneered the Schnurle two-stroke
Two-stroke cycle
A two-stroke engine is an internal combustion engine that completes the process cycle in one revolution of the crankshaft...
loop scavenging process to dispense with the use of a deflector piston
Piston
A piston is a component of reciprocating engines, reciprocating pumps, gas compressors and pneumatic cylinders, among other similar mechanisms. It is the moving component that is contained by a cylinder and is made gas-tight by piston rings. In an engine, its purpose is to transfer force from...
and improve efficiency of the combustion chamber. DKW also developed a highly efficient arrangement of transfer ports. These two features were included in the RT 125 to great commercial advantage. Competitor companies such as Adler and TWN copied the adoption of flat-topped pistons and strove to develop equally transfer port arrangements without infringing DKW's patent
Patent
A patent is a form of intellectual property. It consists of a set of exclusive rights granted by a sovereign state to an inventor or their assignee for a limited period of time in exchange for the public disclosure of an invention....
.

The RT 125 is probably the most copied motorcycle of all time. After World War II
World War II
World War II, or the Second World War , was a global conflict lasting from 1939 to 1945, involving most of the world's nations—including all of the great powers—eventually forming two opposing military alliances: the Allies and the Axis...
the Soviet Union took plans, tooling and even several dozen personnel
Human resources
Human resources is a term used to describe the individuals who make up the workforce of an organization, although it is also applied in labor economics to, for example, business sectors or even whole nations...
as war reparations
War reparations
War reparations are payments intended to cover damage or injury during a war. Generally, the term war reparations refers to money or goods changing hands, rather than such property transfers as the annexation of land.- History :...
to MMZ
MMZ (motorcycle)
MMZ or Moskovskiy Mototsikletniy Zavod was a motorcycle manufacturer, based in Moscow. It commenced operations in 1941 building the M-72, a Soviet licensed copy of the BMW R71. With the German Invasion of the Soviet Union, the plant was transferred east to the town of Irbit in the Ural region...
in Moscow (later transferred to MMVZ
Minsk (motorcycle)
Minsk Motorcycle, or also known as Motovelo Corp, is a company that produces motorcycles. Minsk produces bicycles under its AIST brand. Motovelo is located in Minsk, the capital of Belarus.- History :...
and SMZ) and to a factory in Kovrov
Kovrov
Kovrov is a city and the administrative center of Kovrovsky District of Vladimir Oblast, Russia, situated on the right bank of the Klyazma River . Kovrov's population as of the preliminary results of the 2010 Census was 145,492; down from 155,499 recorded in the 2002 Census, and further down from...
, and produced copies of the RT125 as the M1A Moskva and K-125 respectively. WFM of Poland made a modified version of the RT125 (under SHL
SHL (motorcycle)
SHL is a brand of Polish motorcycles, produced from 1938 until 1970 by Huta Ludwików, later KZWM Polmo-SHL in Kielce .-Pre-war:...
125 and Sokół 125 brands), developed into 125/175 cc family motorcycles, produced until 1985. RT 125 plans were also taken to the United Kingdom where they became the basis of the BSA Bantam
BSA Bantam
The BSA Bantam is a two-stroke unit construction motorcycle that was produced by the Birmingham Small Arms Company from 1948 until 1971...
, and to the USA where they formed the basis of the Harley-Davidson
Harley-Davidson
Harley-Davidson , often abbreviated H-D or Harley, is an American motorcycle manufacturer. Founded in Milwaukee, Wisconsin, during the first decade of the 20th century, it was one of two major American motorcycle manufacturers to survive the Great Depression...
"Hummer
Harley-Davidson Hummer
The Hummer was a motorcycle model manufactured by Harley-Davidson from 1955 to 1959. However, the name "Hummer" is now used generically to refer to all American-made single-cylinder two-stroke Harley-Davidson motorcycles manufactured from 1948 to 1966. These motorcycles were based on the DKW...
". Later Yamaha
Yamaha Motor Company
, is a Japanese motorized vehicle-producing company. Yamaha Motor is part of Yamaha Corporation and its headquarter is located in Iwata, Shizuoka. Along with expanding Yamaha Corporation into the world's biggest piano maker, then Yamaha CEO Genichi Kawakami took Yamaha into the field of motorized...
in Japan copied the RT 125 as the basis of the Yamaha YA-1
Yamaha YA-1
The Yamaha YA-1 is the first motorcycle produced by the Japanese in 1955 by the Yamaha Motor Company.- Background :In the early '50s, after having to replace the factories for the production of musical instruments, severely damaged during the war, Yamaha was facing the industrial conversion of...
.
The source of this article is wikipedia, the free encyclopedia.  The text of this article is licensed under the GFDL.