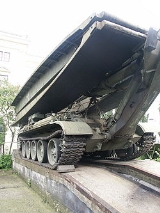 Encyclopedia
The MT-55A is an armoured vehicle-launched bridge
Armoured vehicle-launched bridge
An armoured vehicle-launched bridge is a combat support vehicle, sometimes regarded as a subtype of combat engineering vehicle, designed to assist militaries in rapidly deploying tanks and other armoured fighting vehicles across rivers. The AVLB is usually a tracked vehicle converted from a tank...
(AVLB) tank, manufactured by TS Martin in Slovakia. The AVLB is based on a T-55A
T-55
The T-54 and T-55 tanks were a series of main battle tanks designed in the Soviet Union. The first T-54 prototype appeared in March 1945, just before the end of the Second World War. The T-54 entered full production in 1947 and became the main tank for armored units of the Soviet Army, armies of...
medium tank
Medium tank
Medium tank was a classification of tanks; the medium being intermediate in size and weight and armament between heavy tanks and light tanks.The medium tank concept has been eclipsed by the main battle tank.-History:...
chassis, with the turret detached and replaced by a special bridge launching equipment.

The MT-55A was produced for the armies of the Warsaw Pact
Warsaw Pact
The Warsaw Treaty Organization of Friendship, Cooperation, and Mutual Assistance , or more commonly referred to as the Warsaw Pact, was a mutual defense treaty subscribed to by eight communist states in Eastern Europe...
- including the Soviet Army
Soviet Army
The Soviet Army is the name given to the main part of the Armed Forces of the Soviet Union between 1946 and 1992. Previously, it had been known as the Red Army. Informally, Армия referred to all the MOD armed forces, except, in some cases, the Soviet Navy.This article covers the Soviet Ground...
-, as well as for export clients.

The MT-55A was designed and produced by TS Martin from 1962 (the former Czechoslovakia was one of the countries that build the T-54/55 series under licence). The development phase ended in 1967 after which 5 pre-series vehicles were build. Series production started in 1969.

The transformed T-55A chassis differs only by the arrangement of the compartments in the hull. The bridge tank is proposed for an easy and swift crossing of antitank barriers (trenches) and other obstacles with the purpose of facilitating the passage of mechanised and tank units.

The bridge initiating equipment is controlled by a system of hydraulic cylinders; the allocation of hydraulic oil can be controlled both manually by mechanical levers and automatically. The pressure of the liquid is provided by high-pressure piston pumps motorized by the tank engine
Engine
An engine or motor is a machine designed to convert energy into useful mechanical motion. Heat engines, including internal combustion engines and external combustion engines burn a fuel to create heat which is then used to create motion...
. All mechanisms of the MT-55A used for laying and recovering of the bridge can be controlled by the crew from the inside of the tank, with hatch covers closed.

To begin the launching process, the vehicle stops short of the gap; then, the bridge swings ahead and down while its two sections open like scissors. The MT-55A span is 18 meters long and can hold up loads up to 50 tons. Later the MT-55A was modified with gap measuring mechanism and infrared equipment for bridge laying at darkness. 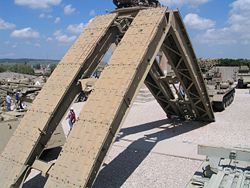