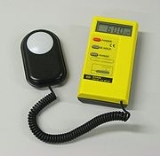 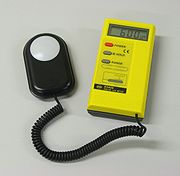 The lux is the SI
International System of Units
The International System of Units is the modern form of the metric system and is generally a system of units of measurement devised around seven base units and the convenience of the number ten. The older metric system included several groups of units...
unit of illuminance
Illuminance
In photometry, illuminance is the total luminous flux incident on a surface, per unit area. It is a measure of the intensity of the incident light, wavelength-weighted by the luminosity function to correlate with human brightness perception. Similarly, luminous emittance is the luminous flux per...
and luminous emittance, measuring luminous flux
Luminous flux
In photometry, luminous flux or luminous power is the measure of the perceived power of light. It differs from radiant flux, the measure of the total power of light emitted, in that luminous flux is adjusted to reflect the varying sensitivity of the human eye to different wavelengths of...
per unit area. It is used in photometry
Photometry (optics)
Photometry is the science of the measurement of light, in terms of its perceived brightness to the human eye. It is distinct from radiometry, which is the science of measurement of radiant energy in terms of absolute power; rather, in photometry, the radiant power at each wavelength is weighted by...
as a measure of the intensity, as perceived by the human eye, of light
Light
Light or visible light is electromagnetic radiation that is visible to the human eye, and is responsible for the sense of sight. Visible light has wavelength in a range from about 380 nanometres to about 740 nm, with a frequency range of about 405 THz to 790 THz...
that hits or passes through a surface. It is analogous to the radiometric
Radiometry
In optics, radiometry is a set of techniques for measuring electromagnetic radiation, including visible light. Radiometric techniques characterize the distribution of the radiation's power in space, as opposed to photometric techniques, which characterize the light's interaction with the human eye...
unit watts per square metre, but with the power at each wavelength
Wavelength
In physics, the wavelength of a sinusoidal wave is the spatial period of the wave—the distance over which the wave's shape repeats.It is usually determined by considering the distance between consecutive corresponding points of the same phase, such as crests, troughs, or zero crossings, and is a...
weighted according to the luminosity function
Luminosity function
The luminosity function or luminous efficiency function describes the average visual sensitivity of the human eye to light of different wavelengths. It should not be considered perfectly accurate in every case, but it is a very good representation of visual sensitivity of the human eye and it is...
, a standardized model of human visual brightness perception. In English, "lux" is used in both singular and plural.

One lux is equal to one lumen per square metre:

1 lx = 1 lm/m2 = 1 cd
Candela
The candela is the SI base unit of luminous intensity; that is, power emitted by a light source in a particular direction, weighted by the luminosity function . A common candle emits light with a luminous intensity of roughly one candela...
·sr
Steradian
The steradian is the SI unit of solid angle. It is used to describe two-dimensional angular spans in three-dimensional space, analogous to the way in which the radian describes angles in a plane...
·m–2.

Achieving an illuminance of 500 lux might be possible in a home kitchen with a single fluorescent light fixture with an output of 12,000 lumens. To light a factory floor with dozens of times the area of the kitchen would require dozens of such fixtures. Thus, lighting a larger area to the same level of lux requires a greater number of lumens.

As with other SI units, SI prefixes can be used, for example a kilolux (klx) is 1,000 lux.


Unicode
Unicode
Unicode is a computing industry standard for the consistent encoding, representation and handling of text expressed in most of the world's writing systems...
has a symbol for "lx": (㏓). It is a legacy code to accommodate old code page
Code page
Code page is another term for character encoding. It consists of a table of values that describes the character set for a particular language. The term code page originated from IBM's EBCDIC-based mainframe systems, but many vendors use this term including Microsoft, SAP, and Oracle Corporation...
s in some Asia
Asia
Asia is the world's largest and most populous continent, located primarily in the eastern and northern hemispheres. It covers 8.7% of the Earth's total surface area and with approximately 3.879 billion people, it hosts 60% of the world's current human population...
n languages. Use of this code is not recommended.


Relationship between illuminance and irradiance

Like all photometric units
Photometry (optics)
Photometry is the science of the measurement of light, in terms of its perceived brightness to the human eye. It is distinct from radiometry, which is the science of measurement of radiant energy in terms of absolute power; rather, in photometry, the radiant power at each wavelength is weighted by...
, the lux has a corresponding "radiometric
Radiometry
In optics, radiometry is a set of techniques for measuring electromagnetic radiation, including visible light. Radiometric techniques characterize the distribution of the radiation's power in space, as opposed to photometric techniques, which characterize the light's interaction with the human eye...
" unit. The difference between any photometric unit and its corresponding radiometric unit is that radiometric units are based on physical power, with all wavelengths being weighted equally, while photometric units take into account the fact that the human eye's visual system is more sensitive to some wavelengths than others, and accordingly every wavelength is given a different weight. The weighting factor is known as the luminosity function
Luminosity function
The luminosity function or luminous efficiency function describes the average visual sensitivity of the human eye to light of different wavelengths. It should not be considered perfectly accurate in every case, but it is a very good representation of visual sensitivity of the human eye and it is...
.

The lux is one lumen/metre2, and the corresponding radiometric unit, which measures irradiance
Irradiance
Irradiance is the power of electromagnetic radiation per unit area incident on a surface. Radiant emittance or radiant exitance is the power per unit area radiated by a surface. The SI units for all of these quantities are watts per square meter , while the cgs units are ergs per square centimeter...
, is the watt/metre2. There is no single conversion factor between lux and watt/metre2; there is a different conversion factor for every wavelength, and it is not possible to make a conversion unless one knows the spectral composition of the light.

The peak of the luminosity function is at 555 nm
Nanometre
A nanometre is a unit of length in the metric system, equal to one billionth of a metre. The name combines the SI prefix nano- with the parent unit name metre .The nanometre is often used to express dimensions on the atomic scale: the diameter...
(green); the eye's visual system is more sensitive to light of this wavelength than any other. For monochromatic light of this wavelength, the irradiance needed to make one lux is minimum, at 1.464 mW/m2. That is, one obtains 683.002 lux per W/m2 (or lumens per watt) at this wavelength. Other wavelengths of visible light produce fewer lumens per watt. The luminosity function falls to zero for wavelengths outside the visible spectrum
Visible spectrum
The visible spectrum is the portion of the electromagnetic spectrum that is visible to the human eye. Electromagnetic radiation in this range of wavelengths is called visible light or simply light. A typical human eye will respond to wavelengths from about 390 to 750 nm. In terms of...
.

For a light source with mixed wavelengths, the number of lumens per watt can be calculated by means of the luminosity function. In order to appear reasonably "white," a light source cannot consist solely of the green light to which the eye's visual photoreceptors are most sensitive, but must include a generous mixture of red and blue wavelengths to which they are much less sensitive.


Use in video camera specifications

Specifications for video camera
Video camera
A video camera is a camera used for electronic motion picture acquisition, initially developed by the television industry but now common in other applications as well. The earliest video cameras were those of John Logie Baird, based on the electromechanical Nipkow disk and used by the BBC in...
s such as camcorder
Camcorder
A camcorder is an electronic device that combines a video camera and a video recorder into one unit. Equipment manufacturers do not seem to have strict guidelines for the term usage...
s and surveillance cameras often include a minimum illuminance level in lux at which the camera will record a satisfactory image. A camera with good low-light capability will have a lower lux rating. Still camera
Still camera
A still camera is a type of camera used to take photographs. Traditional cameras capture light onto photographic film. Digital cameras use electronics, usually a charge coupled device to store digital images in computer memory inside the camera...
s do not use such a specification, since longer exposure times can generally be used to make pictures at very low illuminance levels, as opposed to the case in video cameras where a maximum exposure time is generally set by the frame rate
Frame rate
Frame rate is the frequency at which an imaging device produces unique consecutive images called frames. The term applies equally well to computer graphics, video cameras, film cameras, and motion capture systems...
.

The corresponding unit in English and American traditional units is the foot-candle
Foot-candle
A foot-candle is a non-SI unit of illuminance or light intensity widely used in photography, film, television, conservation lighting, and the lighting industry...
. One foot candle is about 10.764 lux. Since one foot-candle is the illuminance cast on a surface by a one-candela source one foot away., a lux could be thought of as a "metre-candle", although this term is discouraged because it does not conform to SI standards for unit names.

One phot
Phot
A phot is a photometric unit of illuminance, or luminous flux through an area. It is not an SI unit, but rather is associated with the older centimetre gram second system of units...
(ph) equals 10 kilolux.