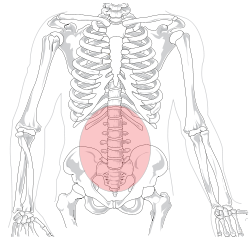 In tetrapod
Tetrapod
Tetrapods are vertebrate animals having four limbs. Amphibians, reptiles, birds and mammals are all tetrapods; even snakes and other limbless reptiles and amphibians are tetrapods by descent. The earliest tetrapods evolved from the lobe-finned fishes in the Devonian...
anatomy
Anatomy
Anatomy is a branch of biology and medicine that is the consideration of the structure of living things. It is a general term that includes human anatomy, animal anatomy , and plant anatomy...
, lumbar is an adjective
Adjective
In grammar, an adjective is a 'describing' word; the main syntactic role of which is to qualify a noun or noun phrase, giving more information about the object signified....
that means of or pertaining to the abdominal segment of the torso
Torso
Trunk or torso is an anatomical term for the central part of the many animal bodies from which extend the neck and limbs. The trunk includes the thorax and abdomen.-Major organs:...
, between the diaphragm and the sacrum
Sacrum
In vertebrate anatomy the sacrum is a large, triangular bone at the base of the spine and at the upper and back part of the pelvic cavity, where it is inserted like a wedge between the two hip bones. Its upper part connects with the last lumbar vertebra, and bottom part with the coccyx...
(pelvis
Pelvis
In human anatomy, the pelvis is the lower part of the trunk, between the abdomen and the lower limbs .The pelvis includes several structures:...
). The lumbar region is sometimes referred to as the lower spine, or as an area of the back in its proximity.

In human anatomy
Human anatomy
Human anatomy is primarily the scientific study of the morphology of the human body. Anatomy is subdivided into gross anatomy and microscopic anatomy. Gross anatomy is the study of anatomical structures that can be seen by the naked eye...
the five vertebrae in the lumbar region of the back are the largest and strongest in the movable part of the spinal column, and can be distinguished by the absence of a foramen in the transverse process, and by the absence of facets on the sides of the body. In most mammal
Mammal
Mammals are members of a class of air-breathing vertebrate animals characterised by the possession of endothermy, hair, three middle ear bones, and mammary glands functional in mothers with young...
s, the lumbar region of the spine curves outward.

The actual spinal cord
Spinal cord
The spinal cord is a long, thin, tubular bundle of nervous tissue and support cells that extends from the brain . The brain and spinal cord together make up the central nervous system...
(medulla spinalis) terminates between vertebrae one and two of this series, called L1 and L2. The nervous
Central nervous system
The central nervous system is the part of the nervous system that integrates the information that it receives from, and coordinates the activity of, all parts of the bodies of bilaterian animals—that is, all multicellular animals except sponges and radially symmetric animals such as jellyfish...
tissue that extends below this point are individual strands that collectively form the cauda equina
Cauda equina
The cauda equina is a structure within the lower end of the spinal column of most vertebrates, that consists of nerve roots and rootlets from above...
. In between each lumbar vertebra a nerve
Nerve
A peripheral nerve, or simply nerve, is an enclosed, cable-like bundle of peripheral axons . A nerve provides a common pathway for the electrochemical nerve impulses that are transmitted along each of the axons. Nerves are found only in the peripheral nervous system...
root exits, and these nerve roots come together again to form the largest single nerve in the human body
Human body
The human body is the entire structure of a human organism, and consists of a head, neck, torso, two arms and two legs.By the time the human reaches adulthood, the body consists of close to 100 trillion cells, the basic unit of life...
, the sciatic nerve
Sciatic nerve
The sciatic nerve is a large nerve fiber in humans and other animals. It begins in the lower back and runs through the buttock and down the lower limb...
. The sciatic nerve runs through the back of each leg and into the feet. This is why a disorder of the low back that affects a nerve root, such as a spinal disc herniation
Spinal disc herniation
A spinal disc herniation , informally and misleadingly called a "slipped disc", is a medical condition affecting the spine due to trauma, lifting injuries, or idiopathic, in which a tear in the outer, fibrous ring of an intervertebral disc allows the soft, central portion A spinal disc herniation...
, can cause pain that radiates along the sciatic nerve (sciatica
Sciatica
Sciatica is a set of symptoms including pain that may be caused by general compression or irritation of one of five spinal nerve roots that give rise to each sciatic nerve, or by compression or irritation of the left or right or both sciatic nerves. The pain is felt in the lower back, buttock, or...
) down into the foot.

There are several muscle
Muscle
Muscle is a contractile tissue of animals and is derived from the mesodermal layer of embryonic germ cells. Muscle cells contain contractile filaments that move past each other and change the size of the cell. They are classified as skeletal, cardiac, or smooth muscles. Their function is to...
s in the low back that assist with rotation, flexibility and strength. These muscles are susceptible to injury, especially while lifting heavy objects, or lifting while twisting. A low back muscle strain can be extremely painful but will usually heal within a few days or weeks.

The lumbar portion of the spine bears the most body weight and also provides the most flexibility, a combination that makes it susceptible to injury and wear and tear over time. This is why low back pain
Low back pain
Low back pain or lumbago is a common musculoskeletal disorder affecting 80% of people at some point in their lives. In the United States it is the most common cause of job-related disability, a leading contributor to missed work, and the second most common neurological ailment — only headache is...
is so prevalent.